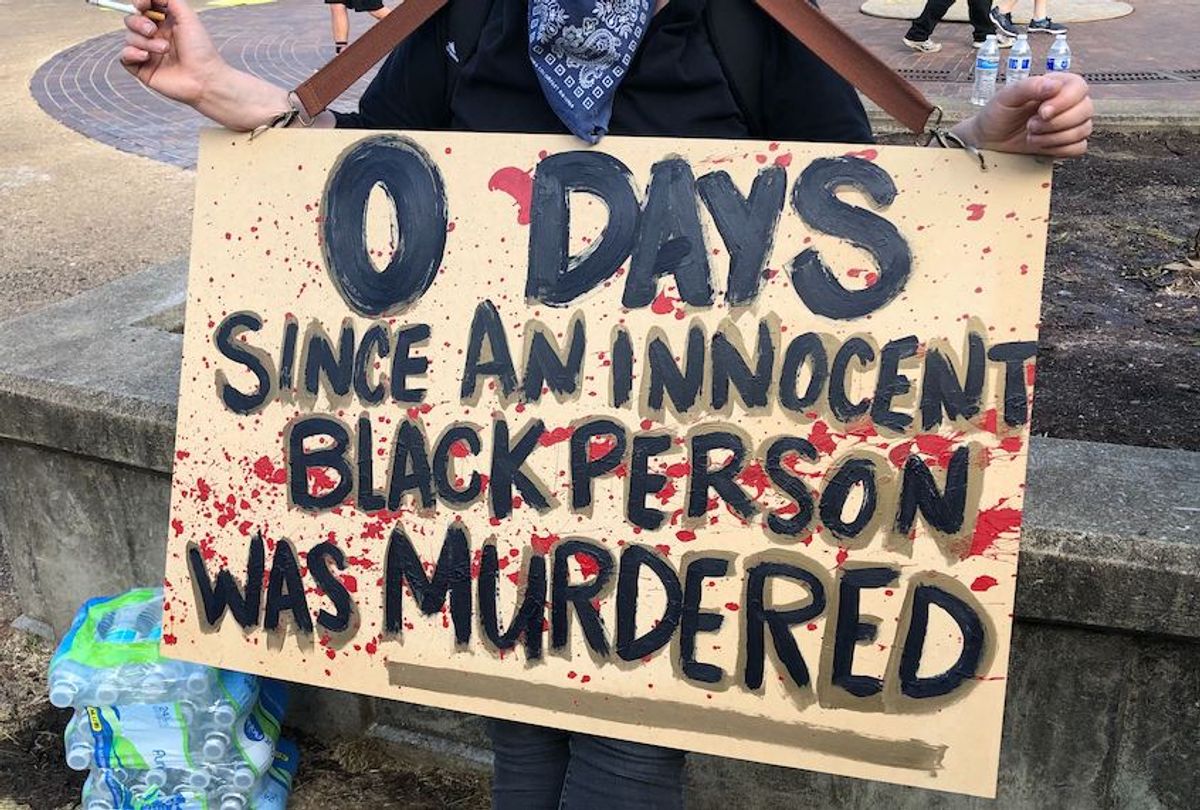 LOUISVILLE, Ky.— Helicopters circled over downtown Louisville Monday evening, the din of the choppers mixing with the voices of more than a thousand gathered with yet another name to cry out in anger and mourning alongside Breonna Taylor's: David McAtee, a black business owner shot and killed by law enforcement in the Russell neighborhood of Louisville early Monday morning. At the assembly in Jefferson Square Park, a protester held a sign reading "Blood on Your Hands Fischer" — referring to Louisville Mayor Greg Fischer — as the peaceful crowd kneeled in the middle of South 6th Street.

As Salon previously reported, McAtee was killed when police and National Guard opened fire at a gas station after being called to respond to a large gathering and enforce the city's 9 p.m. curfew, which had been instated following a weekend of protests centered on the police killings of Taylor, a Louisville EMT, and George Floyd in Minneapolis. LMPD officers present had their body cameras turned off in violation of departmental policy. Louisville Police Chief Steve Conrad — already set to retire June 30 in the wake of Taylor's killing — was officially relieved of duty Monday, though he will retain his pension.

Rosie Henderson had been in Jefferson Square Park since noon. Salon spoke to her while she loaded plywood boards into the back of her van, which some young attendees had brought to the protest to use as shields, in order to help prevent escalation incidents.

Indeed, the atmosphere was loose enough — the mood could be characterized as wholesome, even, with pizza and snacks circulating — for a young woman named Imani, a new graduate of Louisville's Western High School, to stage a graduation portrait session in full cap and gown.

"I decided to take my graduation photos here because I am African American and I wanted to show that African Americans are great—" Her sister, Tamila, jumped in: "And educated. We also want to highlight all this is going on in 2020 — COVID-19, all this injustice. Just shed light and have a memory, a photo, a standstill the year she graduated and why she was ripped of the ceremony."

And yet, walking north up Sixth Street into the square, a heavy police and National Guard presence was visible. When you looked up at the helicopters, you could see officers positioned on rooftops ringing the square. On Sunday, law enforcement reportedly began clearing protesters out of a similar gathering using tear gas and other violent crowd control methods almost an hour before the 9 p.m. curfew fell. On Friday, Kentucky State Representatives Attica Scott and Charles Booker, one of the Democratic primary candidates running to challenge Sen. Mitch McConnell in the fall, had been teargassed by police.

Deborah Conrad, a white pastor from the progressive Woodside Church in Flint, Michigan, traveled in for the protests wearing her clerical collar, black robes and rainbow tippet scarf. She told Salon "white churches especially" needed to do more for racial justice.

"One of the things that I believe is that if the church was doing what it was supposed to do, we wouldn't be dealing with this over and over again," Conrad said. "The church is far too silent far too often. If we doing are stuff, this s**t would go away."

Around 7:30 p.m., the crowd began to march, walking more than two and a half miles in the direction of the setting sun, with cars up and down Broadway honking in support, to join the crowd assembled outside of Dino's Food Mart.

David McAtee was a fixture here in Louisville's Russell neighborhood, a historically black community in the city's West End. Friends and family referred to him as "Yah Yah," and he sold plates of barbeque out of the Dino's lot. Multiple protest attendees recalled to Salon earlier on Monday how he would feed both Louisville police officers and the homeless for free.

By about 8:30 p.m., Russell neighborhood resident Erik Kimbrough had been out by Dino's throughout a full day of protests.

"Most of the white kids are gone now," Erik Kimbrough said, gesturing to the crowd in the waning daylight. "But this is the neighborhood right here. The neighborhood where everybody's hanging out. This is what it's like on a regular weekend. It's been peaceful with no police."

But he was concerned that if LMPD or the National Guard made their way back into Russell, the laid-back atmosphere could shift quickly.

"Soon as the police come, that's when s**t going to pop off,"  Kimbrough said. "The temperature's going to turn."

The police did return later in the evening to assist with putting out a fire at Dino's, but by all reports they maintained a quiet presence.

The group that walked to Dino's turned around to march back up Broadway. A crowd reassembled in Jefferson Square Park, where they remained for at least an hour past curfew until, as WFPL's Ryan Van Velzer reports, "things changed." Police issued dispersal orders and subsequently cleared the square with tear gas, flash bangs and pepper bullets.

At a press briefing at 11:15 p.m. with Mayor Fischer, Acting Police Chief Robert Schroeder characterized the protests as "mostly peaceful" but claimed officers around Jefferson Square Park "saw disturbing signs in the crowd" around 10 p.m., like "weapons and other implements that we feel threatened the safety of both our officers and the crowd."

Schroeder said after the dispersal order was then issued, "two subjects" fired gunshots in the crowd, though no injuries were cited.

"WFPL's Ryan Van Velzer did not hear gunshots, but that doesn't mean they didn't happen," WFPL reports. "It was a chaotic scene."

Two police lines formed and marched on protesters, at one point firing tear gas behind them forcing them to run through it. Officers also appeared on rooftops fired down on small clusters of protesters after clearing Jefferson Square Park.

At the briefing, Fischer also condemned President Donald Trump's remarks from the White House earlier that evening, saying "rhetoric like the kind we're hearing from our president tonight of law and order threatening military action on our citizens, it is not helpful.... We do not need to be threatening our citizens."

The FBI has joined the Kentucky State Police in investigating the National Guard and Louisville police action that led to McAtee's death, a week after the Bureau announced its own investigation into the police killing of Breonna Taylor.