Protests have exploded into chaos, amid a vacuum of leadership and a social order destabilized by the pandemic 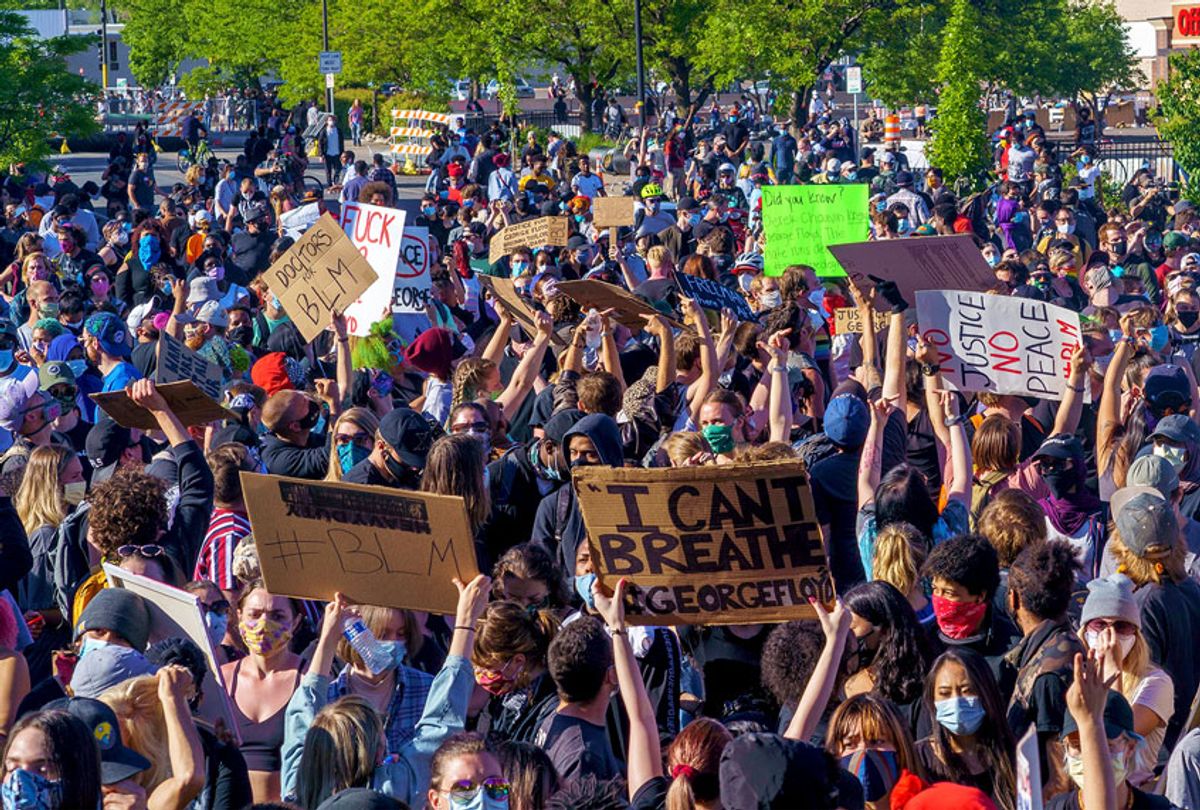 Protesters march during a demonstration in a call for justice for George Floyd who died while in custody of the Minneapolis police, on May 30, 2020 by the 5th police precinct in Minneapolis, Minnesota. (KEREM YUCEL/AFP via Getty Images)
--

More than 40 U.S. cities, including Washington, D.C., imposed curfews on Sunday night in response to the most violent demonstrations to rip across the country in decades.

Protesters and law enforcement clashed for the third day in cities nationwide following the Friday arrest and charging of a former Minneapolis police officer for the murder of George Floyd, an unarmed black man in his custody.

Minneapolis first erupted into civil unrest Thursday evening, when police met what had been peaceful protests with tear gas, leading to the torching of a precinct building and a night of looting and violence, including at least one death.

Disturbances have since broken out in major cities from Minneapolis to Los Angeles to New York and even across the Atlantic Ocean in London, where 23 people were arrested in solidarity protests that grew contentious Sunday.

In all, U.S. law enforcement officers have so far made nearly 1,700 arrests, and more than a dozen governors have activated a total of approximately 5,000 National Guard members nationwide.

The mayor of Washington activated the National Guard on Sunday as thousands of protesters gathered again at the White House, where a Friday night rally grew so violent that Secret Service agents rushed President Trump into an underground bunker used in the past for terrorist attacks.

In response, Trump tweeted that any protesters who breached the White House perimeter would be met with "the most vicious dogs, and most ominous weapons, I have ever seen."

Clashes have also broken out in the heartland and the Sun Belt, where Arizona governor Doug Ducey has set a statewide curfew for the next week. A man was killed Saturday night during riots in Indiana, and police discharged tear gas and mace on crowds in Columbus, Ohio.

Protesters have frequently met with hyper-aggressive actions from police, who have sometimes appeared determined to increase disorder rather than control it.

Officers in New York City drove an SUV through a crowd of protesters in the Flatbush neighborhood of Brooklyn; no one was seriously injured.

Police in Erie, Pennsylvania, maced a young woman and then kicked her while she sat on the ground. In Atlanta, police assaulted two black people in a car for no apparent reason. The alarming incident, caught on camera, led to the firing of at least two officers.

Police have also often seemingly targeted members of the press intentionally, without explanation.

"The use of force by police sometimes seemed unconnected to any threat that they faced, and aimed at people who had little to do with the violent protests," the Washington Post reported Sunday.

Officers in Austin, Texas, deployed tear gas and fired dozens of rounds of rubber bullets on Sunday into a group of protesters occupying the western lanes of Interstate 35. Hours later, a tanker truck drove into a crowd of protesters occupying the western lanes of the same interstate about 1,100 miles north, in Minneapolis. The driver was taken into custody and identified as a Ukrainian citizen who appears to have made campaign donations to Trump. Minnesota state police said the "disturbing" attack appeared deliberate.

Numerous demonstrations across the country have devolved into vandalism and looting that has damaged or destroyed hundreds of businesses, as outrage over police brutality and racial injustice has apparently metastasized into unfocused rage. Some observers believe many episodes of property destruction were deliberately instigated by tertiary groups and individuals, but to this point that remains unproven.

In an effort to distance their cause from the violence and turn down the temperature, social-justice activist organizations in several cities canceled their planned protests Sunday. But scenes on the ground indicate those efforts have had little effect.

What might have begun as a shared, focused cause has at some point exploded into a chaotic, decentralized expression of anger, amid a population grown increasingly restless, polarized and bitter under the social and economic restrictions necessitated by the coronavirus pandemic.

As these demonstrations have grown further and further removed from their original causes and issues, a contentious national political debate has arisen over who bears responsibility for starting and stopping the violence.

Republican officials have seemed to embrace the confusion for political benefit. On Sunday, Trump said he would declare antifa — an undefined, loose affiliation of anti-fascist radicals with no known organizational structure — as a "terrorist organization." No such designation is possible for a domestic group. Attorney General William Barr has signed on to the quixotic mission.

"Get tough Democrat Mayors and Governors," Trump wrote on Twitter. "These people are ANARCHISTS. Call in our National Guard NOW. The World is watching and laughing at you and Sleepy Joe. Is this what America wants? NO!!!"

"Sleepy Joe" was of course a reference to former Vice President Joe Biden, now the presumptive Democratic presidential nominee. He was greeted by black men at the site of earlier protests in his home city of Wilmington, Delaware, who told him, "You've got to get this crazy guy out of office."

Atlanta Mayor Keisha Lance Bottoms, when asked by Jake Tapper on CNN's "State of the Union" what she wanted from President Trump, said, "He should just stop talking. This is like Charlottesville all over again."

Trump has tried repeatedly to associate himself with the law enforcement response, a striking contrast to his responses a month ago, when police officers watched impassively as armed protesters stormed state capitol buildings to protest shutdown restrictions designed to control the coronavirus pandemic.

"These are very good people, but they are angry," Trump tweeted May 1 about lockdown protesters in Michigan. "They want their lives back again, safely! See them, talk to them, make a deal."

But last week Trump attacked the Minneapolis protesters as "THUGS" in a pair of late-night tweets Thursday, even suggesting that demonstrators might be shot.

"When the looting starts, the shooting starts. Thank you!" the president said in one tweet, later masked by Twitter for "glorifying violence."

There has been suggestive evidence that far-right extremist groups, such as the Proud Boys and meme-nourished Boogaloo movement, may hope to hijack the social unrest and spark a new civil war.

In perhaps the first signs of detente between police and protesters, law enforcement officials in at least a few places around have begun to set aside their gear and join protesters in solidarity, carrying banners, kneeling or chanting, "No justice, no peace."

A line of police in Washington, D.C., took a knee in front of demonstrators they had been blocking. The mayor and sheriff of Santa Cruz, California, knelt side by side. The county sheriff in Flint, Michigan, after speaking with demonstrators, instructed officers to set aside their riot gear and join the protesters to "make this a parade, not a protest."

"Everybody is very peaceful. I think they got their message across," Police Chief Carl Scalzo of Easton, Pennsylvania, told Salon. "They had a bunch of speeches here and now they're on the move, walking and trying to spread the word. As long as they do it peacefully, we're happy to accommodate them."

In Oakland, California, where a federal security guard was shot and killed on Friday night, and a second was injured, the Anti Police-Terror Project organized a socially-distanced protest caravan of hundreds of cars, drawing families and children in solidarity.

Such scenes offered rare glimpses of unity and hope. But as this article was published, President Trump blamed the media for "fomenting hatred and anarchy," and a fire on H Street in Washington, near the White House, continued to spread.