"We've taken action in the interest of preventing others from being inspired to commit violent acts," Twitter says 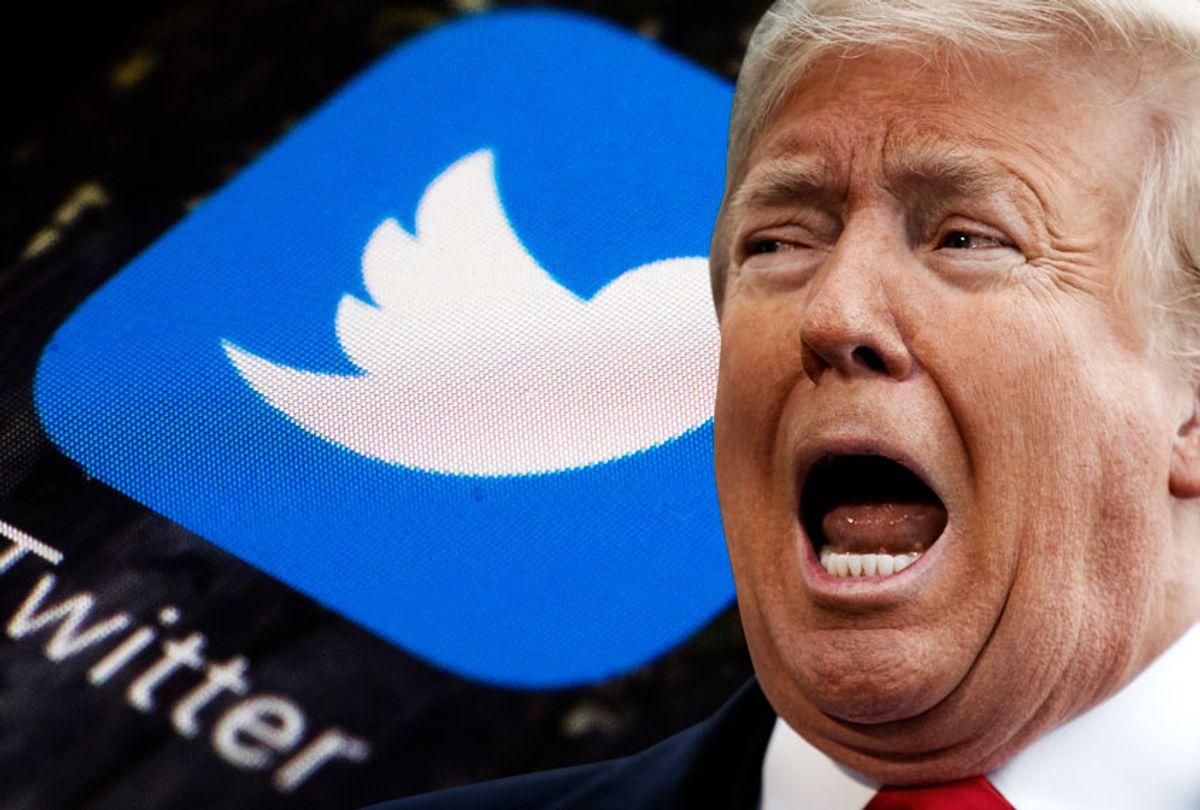 Twitter added a disclaimer to a tweet sent by President Donald Trump which suggested that protesters should be shot after demonstrators in Minneapolis set fire to a precinct where the officers involved in George Floyd's death in police custody worked.

Though the Minneapolis protests began peacefully, protesters have clashed with police in recent days after officers fired tear gas and rubber bullets at crowds. Tensions escalated on Thursday when a group of protesters set fire to the city's 3rd Precinct. No injuries were reported.

Trump said on Twitter the he "can't stand back and watch this happen to a great American city." He faulted the city's Democratic leaders and threatened to "send in the National Guard & get the job done right," though Minnesota Gov. Tim Walz had already activated the force.

"These THUGS are dishonoring the memory of George Floyd, and I won't let that happen. Just spoke to Governor Tim Walz and told him that the Military is with him all the way," the president said in a second tweet. "Any difficulty and we will assume control but, when the looting starts, the shooting starts."

"When the looting starts, the shooting starts" is a phrase coined by former Miami Police Chief Walter Headley, who ordered his officers to shoot "young hoodlums" who were black.

Headley later used the phrase again after he was criticized for taking a vacation during a riot surrounding the 1968 Republican National Convention, which left three dead and many wounded.

"This tweet violates our policies regarding the glorification of violence based on the historical context of the last line, its connection to violence and the risk it could inspire similar actions today," the social network said. "We've taken action in the interest of preventing others from being inspired to commit violent acts, but have kept the tweet on Twitter because it is important that the public still be able to see the tweet given its relevance to ongoing matters of public importance."

The move came after Twitter issued a rare fact-check of Trump's tweets pushing baseless conspiracy theories about mail voting, which prompted Trump to sign a legally-dubious executive order seeking to crack down on social media companies' protections against lawsuits over content published by users.

"We've taken action in the interest of preventing others from being inspired to commit violent acts, but have kept the tweet on Twitter because it is important that the public still be able to see the Tweet given its relevance to ongoing matters of public importance," a Twitter spokesperson told BuzzFeed News. "As is standard with this notice, engagements with the tweet will be limited. People will be able to retweet with comment, but will not be able to like, reply or retweet it."

The White House responded by claiming that the move showed that Twitter was a publisher — not a platform.

"The President did not glorify violence. He clearly condemned it," the official White House account tweeted. "[Twitter CEO Jack Dorsey] and Twitter's biased, bad-faith 'fact-checkers' have made it clear: Twitter is a publisher, not a platform."

The White House claimed that Trump sharing a video of a man saying the "only good Democrat is a dead Democrat" did not undercut their claim.

"The president and the entire administration condemn violence in all forms, as we have stated many times," White House spokesperson Judd Deere told BuzzFeed News.

Trump reiterated his call to revoke Twitter's legal protections after the spat.

"Twitter is doing nothing about all of the lies & propaganda being put out by China or the Radical Left Democrat Party," he claimed, even though Twitter also slapped a warning on a false tweet from a Chinese official this week. "They have targeted Republicans, Conservatives & the President of the United States. Section 230 should be revoked by Congress. Until then, it will be regulated!"

Dan Scavino, the president's deputy chief of staff, said the social network should be targeting protesters instead.

"Twitter is targeting the President of the United States 24/7, while turning their heads to protest organizers who are planning, plotting, and communicating their next moves daily on this very platform," he tweeted. "Twitter is full of shit - more and more people are beginning to get it."

But First Amendment scholars rejected Trump's claims that Twitter was violating his free speech, arguing that, if anything, Trump was threatening the social network's rights.

"Fundamentally this dispute is about whether Twitter has the right to disagree with, criticize and respond to the president," Jameel Jaffer, the head of the Knight First Amendment Institute at Columbia University, told The New York Times. "Obviously, it does. It is remarkable and truly chilling that the president and his advisers seem to believe otherwise."