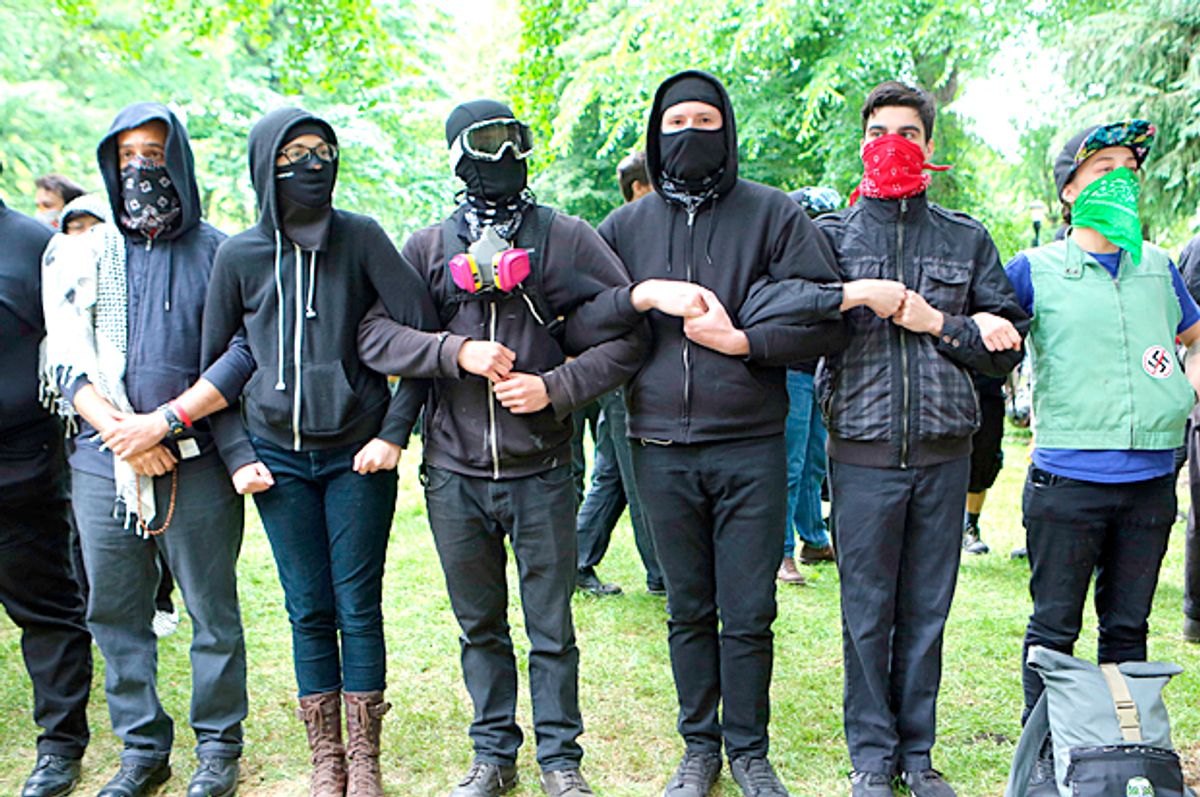 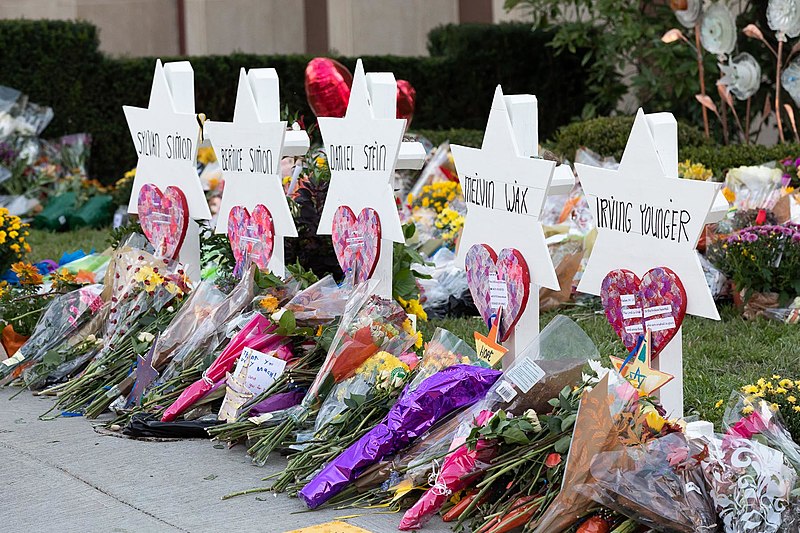 Tribute to victims at the Tree of Life Congregation Synagogue in Pittsburgh. (photo: Wikimedia)

Robert Bowers, the man arrested for a rampage that killed seven at Pittsburgh’s Tree of Life Synagogue, was seemingly steeped in the ultra-right’s internal online debates, blaming Jews and Muslims for what he saw as the “certain extinction” toward which Americans and “Western Civilization” are supposedly headed. Right before the killing spree, Bowers posted on Gab, a social media platform used by white nationalists, that he “can’t sit by and watch my people get slaughtered,” singling out HIAS, a pro-refugee organization that Tree of Life supports, as a particular villain.

Bowers is a believer in “white genocide,” a white-supremacist delusion that holds that demographic and social changes in the U.S. and other countries — such as immigration, an increase in multiracial children, multiculturalism and feminism — are all part of a plot to exterminate the white race.

A massacre in El Paso left 20 dead, and the suspect appears to have posted an anti-immigrant manifesto immediately before the rampage that echoes white-nationalist talking points on the supposed threat of the “ethnic displacement” of white people; it warns against “race mixing,” and refers to immigrants as “invaders.”

Meanwhile, hate crimes in America rose by 9% in 2018, the fifth consecutive year of increase and a trend that so far continues into 2019. The most frequently targeted groups were black, Jewish and LGBTQ people; almost all the hate-based murders were carried out by white supremacists and misogynists, and none were attributable to leftists. 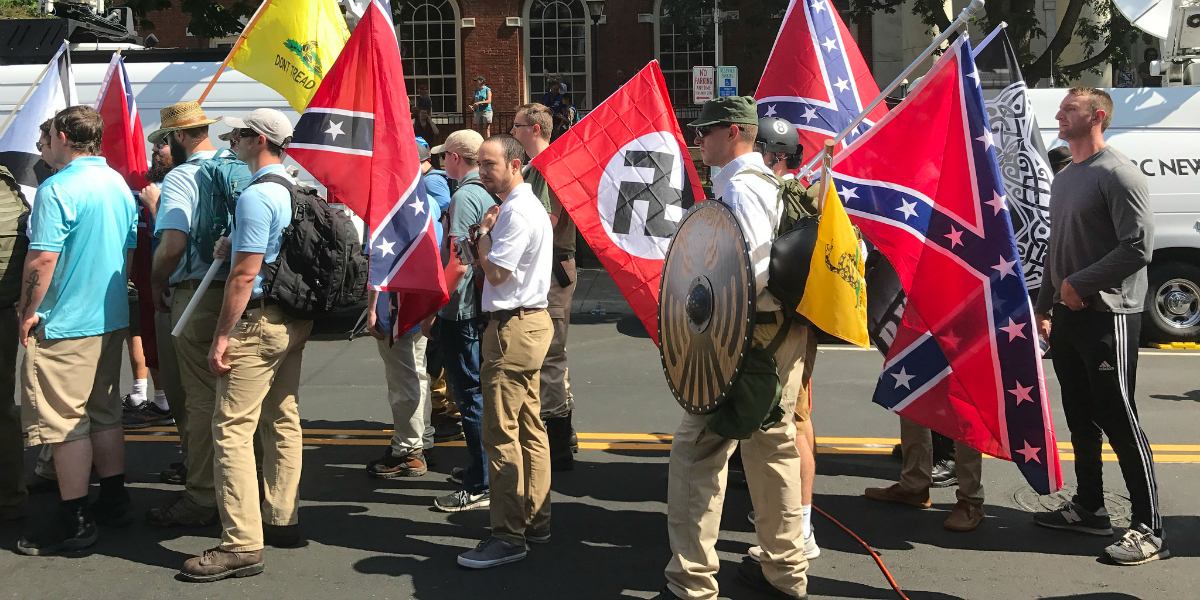 This is the backdrop against which conflicts between fascists and antifascists must be considered, particularly as the movements on the vanguard of the American right are implicated in violent attacks of their own.

The Proud Boys are a group of violent neo-fascists who are anti-Muslim, anti-immigrant and anti-transgender people. Violence is in the organization’s very DNA. Their initiation rituals involve applicants being beaten by people in the group, as well as prospective members “serv[ing] the ‘cause’ . . . by engaging in a physical brawl with members of ‘antifa.’” In October of last year, after a New York lecture by the organization’s founder, Gavin McInnes, a mob of Proud Boys was captured on video beating several men while yelling homophobic slurs. Ten members of the group were charged in the assault, and two have been convicted.

Patriot Prayer is a violent, radical right-wing group. In 2018, Patriot Prayer members were arrested for assaulting multiple people in Portland. On Aug. 3, Portland police arrested six members of the organization, including its leader, Joey Gibson, for attacking antifascists on May Day; the group has also been caught on video planning assaults.

The Three Percenters are an armed anti-migrant group;  one of its most well-known leaders, Chris Hill, led an armed protest against the construction of a mosque. Earlier this year, three men tied to the group were sentenced to a combined 81 years in prison for plotting to bomb Somali and Muslim communities in Kansas.

American Guard, which the Southern Poverty Law Center considers a hate group, has members who previously belonged to the KKK. Brien James, who founded American Guard in Indiana in 2016, is alleged to have punched and stomped a man to the brink of death at a party for refusing to “sieg heil,” and has boasted of being “tried for attempted murder and multiple batteries and hate crimes,” as well as having a Joint Terrorism Task Force file “a mile long”; in 2006, he was part of a group that beat up a rival fascist in front of the latter’s wife and daughter. 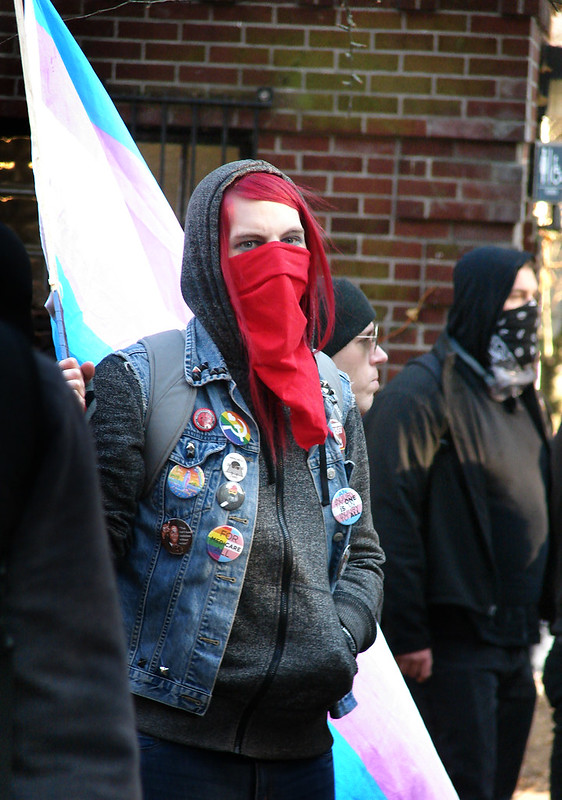 Antifascists organize to try to stop these movements as one prong of an effort to build a more equal world. “Antifa” refers to one set of tactics used to physically confront such groups; Cornel West says that antifa saved his life and those of other nonviolent protesters resisting the neo-Nazis in Charlottesville.

Maximillian Alvarez, a writer and PhD candidate who organizes with the Campus Antifascist Network, says that contemporary antifascists “rely on collective, autonomous, grassroots power to disrupt, expose, block and overwhelm fascist gatherings.” He describes people engaged in antifascist practice as taking the view that

staying put is fatal while violent extremists take bolder action and banal institutional powers conspire more brazenly against us in the shifting terrain of our increasingly extreme moment; to resist surges in far-right extremism while constantly moving to build popular support for a progressive dismantling of the material and cultural conditions that engender it — this is the core of any antifascist politics worthy of the name.

Historian Mark Bray (Boston Review, 11/29/17) explains that while the overwhelming majority of antifascist action is nonviolent,

they take fascist ideologues at their word when they threaten to murder immigrants. The antifascist conception of self-defense amounts to an argument for the minimization of harm to marginalized communities. The best way to accomplish this, antifascists argue, is to stop white supremacists from taking even the first step toward building power rather than waiting for them to show up at someone’s house with baseball bats.

This goal, Bray says, is usually accomplished through a wide variety of nonviolent methods —

actions which tend to fly beneath the public radar. But when such tactics fail, as a last resort antifascists are willing to physically shut down a Klan rally — even one that is “law-abiding.”

Thus the qualitative differences between antifa and the über-right could hardly be more stark. The latter preclude debate by dehumanizing the majority of people in America (and on earth) who aren’t white, male, straight and cisgender, and by enacting or threatening violence against women and minorities because of who they are. Yet when the Proud Boys, Patriot Prayer, the Three Percenters and American Guard rallied in Portland, Oregon, last month — at least in part, it would seem, in an effort to encourage the government to curb left-wing dissent by classifying antifa as an “organization of terror“ — mainstream media repeatedly suggested that these outfits are analogous to antifa.

USA Today (8/17/19) used vague language to obfuscate the nature of the conflict, describing explicit racists and explicit anti-racists as “competing groups” who “faced off with heated, verbal exchanges,” engaged in “political skirmishes” as “protesters and counter-protesters battled.” 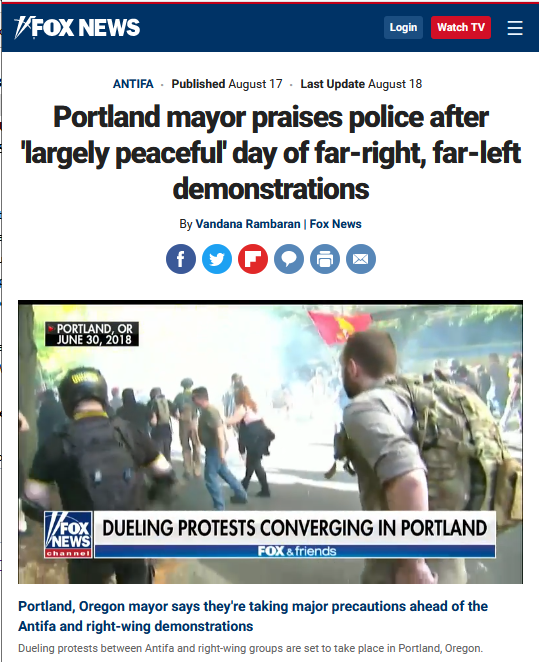 Fox News (8/17/19) applied the same phony balance in its headline, “Portland Mayor Praises Police After ‘Largely Peaceful’ Day of Far-Right, Far-Left Demonstrations.” Using “far” as a modifier for both factions makes them sound like they are mirror images of each other, rather than one group of people that wants to promote violence against some of the most vulnerable in America and another that wants to stop that from happening.

The mayor of Portland, Ore., said Saturday night that his city had avoided the “worst-case scenario” after members of far-right groups and far-left members of antifa held dueling demonstrations in the center of the city that lasted for hours on end.

The article implied the conflict was between forces that are similar because they are on the fringes of opposite ends of the political spectrum, “dueling demonstrations” rather than people attempting to prevent fascists from building their movement to murder, assault and oppress women and minorities. Similar gatherings in Portland had, the piece noted, “erupted in clashes,” as if these “clashes” can be best understood as a depoliticized force of nature, like a volcano, instead of violent groups bent on dehumanization meeting pushback when they hold public events to spread their message.

The Boston Herald (9/3/19) had a veneer of both sides-ism, saying in an editorial that “antifa and various far-right groups have continuously clashed on the streets of Portland, with escalating violence” and that any form of “violent and disruptive behavior cannot be normalized by our politicians.” (Opposing all forms of “disruptive behavior,” of course, means opposing all protests.) Y

et it’s clear that in this article, which focuses on the antifa presence at Boston’s so-called “Straight Pride Parade,” the Herald wasn’t committed to moral equivalency between violent right-wing bigots and those who are fighting back against them: The article strongly implied that antifa is a more urgent social ailment, arguing that “our elected leaders need to call out antifa for what they are: a hate group,” without saying the term “hate group” should apply to the “Straight Pride” organizers, or any of the anti-minority, anti-women outfits that gathered in Portland; nor do the authors specify which demographic people using the antifa tactic supposedly hate, presumably because no such demographic exists. 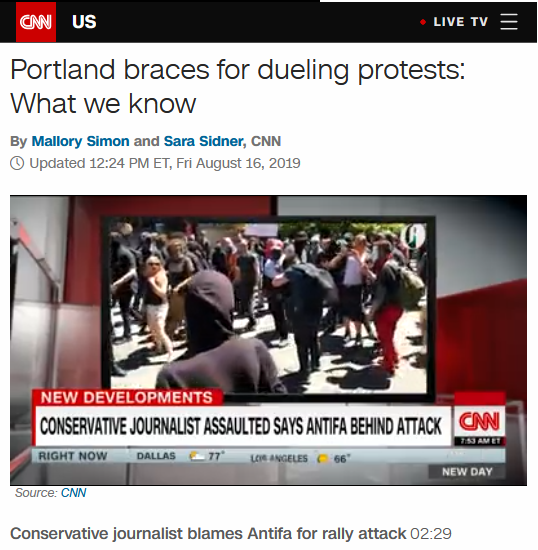 The “conservative journalist” in CNN‘s headline (8/16/19) is Andy Ngo — described by Jacobin (8/16/19) as a “right-wing provocateur” and “the most dangerous grifter in America.”

Equation of antifa with its antagonists is a problem that unites conservative and centrist media. A CNN report (8/14/19) obscured the qualitative differences between violent racist, misogynist formations and those who oppose them in its headline, “Portland Braces for Dueling Protests: What We Know.” “Dueling protests” implies that the groups confronting each other are equivalent, though the article eventually noted that the Southern Poverty Law Center considers one side to be “a mix of white supremacists [and] neo-Nazis.”

The article’s lead referred to “multiple far-right and extremist groups” planning to attend, and its fourth sentence said that Joe Biggs, formerly of the right-wing conspiracy website Infowars, “has posted he wants the protest to ‘put an end to domestic terrorism,’ specifically left-wing antifascist extremists known as antifa.” The word “extremists” does not appear in quotes, so CNN appears to be endorsing its use.

Applying the term “extremist” to both antifa and the far right only a few sentences apart sends the message that they are substantively the same. Likewise, when CNN reports, “There are fears that the rally will attract many right-wing extremists, as well as antifa counter-protests,” the suggestion is that there’s as much reason to fear antifa as the violent fascists.

A New York Times article (8/17/19) criticized Trump for saying that antifa should be designated a terror organization by writing that Trump “did not mention any of the right-wing groups, although both they and antifa have a history of using violence against their opponents.” In this formulation, attacking people with the explicit goal of trying to subjugate the vast majority of the country and the world that is not white, male, cisgender and straight is indistinguishable from confronting such attacks.

Such framing obscures what ought to be made obvious: that there is a stark difference between groups who see violence as a tool to make the world a more racist, misogynist, transphobic and homophobic place, and those who defend against such violence.