Salon spoke to community members who remembered a Louisville fixture, the man who served BBQ at Dino's Food Mart 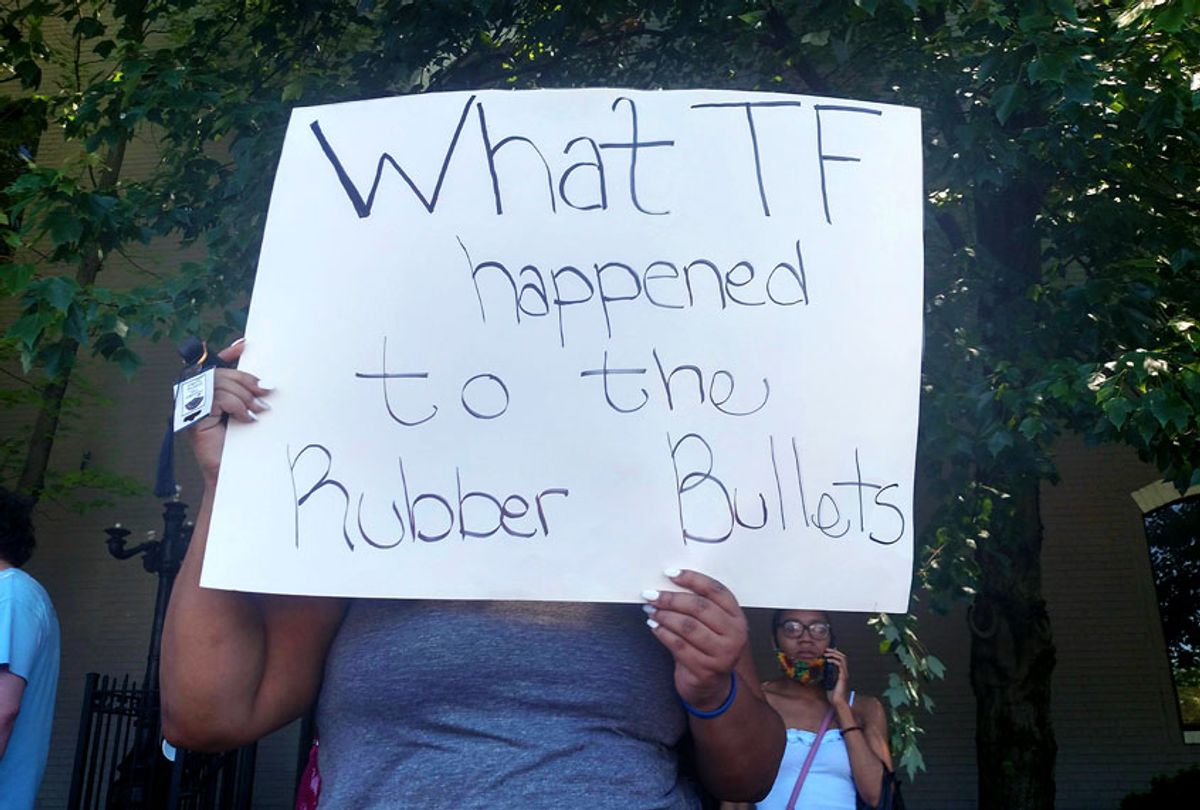 Protestor at the site of David Mcatee's death (Ashlie Stevens)
--

LOUISVILLE, Ky.—On Monday afternoon, about two miles outside of downtown Louisville, dozens of protesters with "Black Lives Matter" and "What TF Happened to the Rubber Bullets" signs gathered in the parking lot of Dino's Food Mart.

Earlier in the morning, David McAtee was killed in the wake of police and National Guard opening fire at the gas station after being called the night before to respond to a large gathering and enforce the city's 9 p.m. curfew, which had been instated following a weekend of protests surrounding the deaths of Breonna Taylor and George Floyd.

According to Louisville Metro Police Department Chief Steve Conrad — who, as of 4 p.m. has been relieved from his position — a shot was fired at the officers, who responded by shooting back into the crowd; officers' body cameras were not on during the shooting.

McAtee was a fixture in Louisville's Russell neighborhood, which is a historically black community. Friends and family referred to him as "Ya Ya," and he sold plates of barbeque out of the Dino's lot. Multiple protest attendees recalled how he would feed both Louisville police officers and the homeless for free.

"This location is the one of the busiest locations in West Louisville," McAtee had once told West of Ninth, a local photo blog, in 2019. "I always wanted to be in this spot, and when the opportunity came, I took it.

McAtee was shot shortly after midnight and died on the scene. He was 53.

"I live right up the street from here," said a protester named Niki, who declined to provide her last name. "I'm here because of all that is going on, still. Still the police brutality. What happened last night didn't have to happen, I was here."

Niki described how the area surrounding Dino's — including the McAtee's barbeque stand — was a gathering place for the community. No protests had taken place in the surrounding area that evening and she is unsure why police responded to the area.

"This is the hood; we do this here," she said. "We weren't messing with anybody, we weren't rioting, and they chose to come down here."

Erik Kimbrough stood across the street from where McAtee was killed, wearing a red shirt that reads "502 Stop the Violence." Nearby, protesters unloaded cases of bottled water and sheet trays of fried chicken from the back of a parked pickup truck.

"They killed a good man, an innocent man," Kimbrough said. "This is a whole sad thing for the black community, but right now it is good love and good unity. All this madness with the police killing black men, unarmed black men; I feel like the black man is an endangered species."

While some were there to honor McAtee's life, others came with the purpose of advocating for political change in Louisville. One protester, who introduced himself as "The Real Neil from Louisville" walked along Broadway, holding up a sign that read, "What the heck, Greg?" referencing Louisville mayor Greg Fischer.

He said the pain caused by the death of Breonna Taylor, a 26-year-old black woman who was fatally shot by Louisville Metro Police Department officers, is only being compounded as time goes on without Fischer firing or suspending the officers responsible.

"Then you wake up, and this happens," Neil said. "[Fischer] has failed these people for so many years. He needs to resign. We want him gone."

Fischer had briefly visited the site of McAtee's death earlier in the day. In a statement, he said that he connected with "Miss Odessa," McAtee's mother. "[I] was so moved that I went to be with her for a moment to mourn and grieve."

It's a gesture that Neil said rings hollow as protests are planned to continue into the evening in the city.

"We keep talking about what Muhammad Ali would do," Neil said. "It's time for [Fischer] to go."