Mayor Greg Fischer announced Chief Steve Conrad, already due to step down June 30, has now been relieved of duty 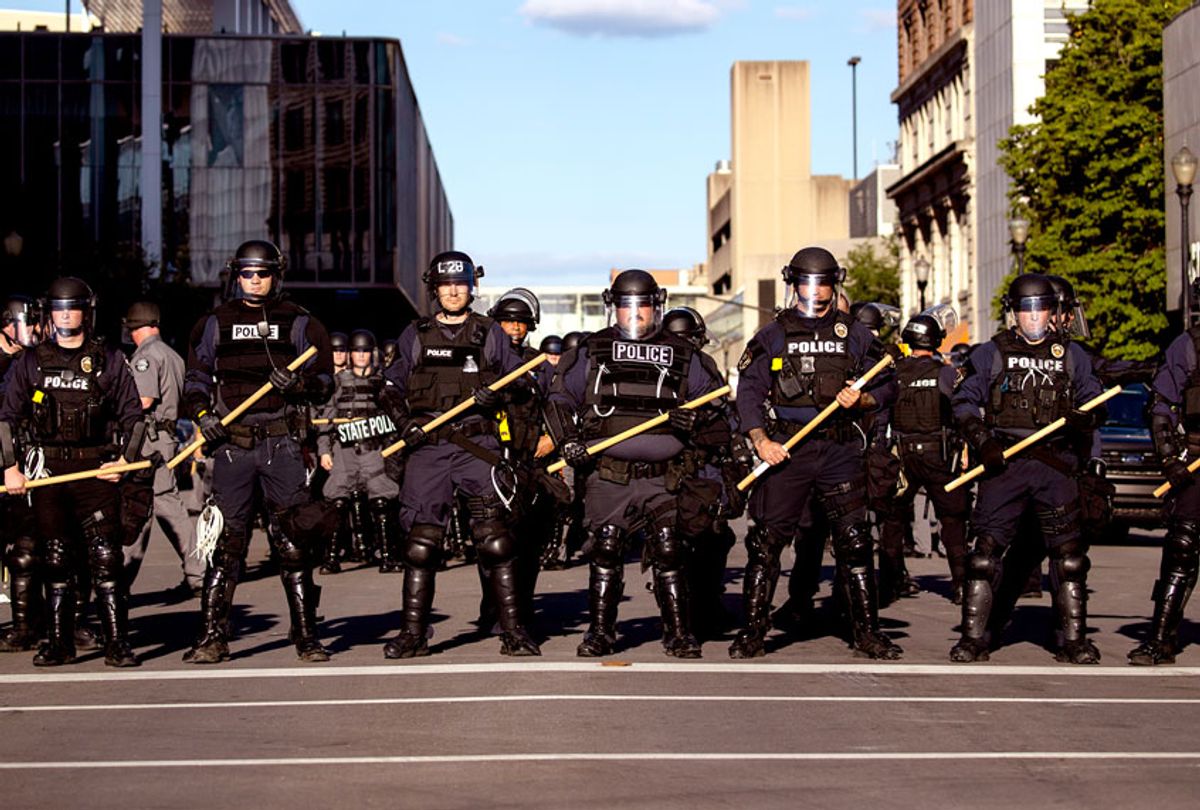 Police officers in riot gear stand in formation at a cross street as they make their way to where protesters are gathered on May 30, 2020 in Louisville, Kentucky. Protests have erupted after recent police-related incidents resulting in the deaths of African-Americans Breonna Taylor in Louisville and George Floyd in Minneapolis, Minnesota. (Brett Carlsen/Getty Images)
--

Police Chief Steve Conrad, set to retire June 30 in the wake of the police killing of Breonna Taylor, has now been relieved of duty. Conrad, as WDBR's Chris Otts reports, will keep his accumulated time off and his pension will not be affected.

According to Assistant Police Chief Robert Schroeder, it is still not clear who shot McAtee; police officers and National Guard members fired weapons. Louisville's curfew, which runs 9 p.m.-6:30 a.m., has been extended to June 8.

A man was shot and killed in Louisville, Ky., early Monday morning after local police and National Guard members fired live rounds into a crowd.

Louisville Metro Police Chief Steve Conrad said the troops had been sent to help city police dispel a group of people gathered in a parking lot on Sunday night, when, he claimed, someone in the crowd shot at them.

"Officers and soldiers began to clear the lot and at some point were shot at," Conrad said in a statement. "Both LMPD and National Guard members returned fire, we have one man dead at scene."

Louisville is one of about 40 US cities to have imposed a curfew, which began at 9 p.m. A witness told reporters from local news channel WLKY that the crowd in the parking lot was not protesting, but were simply out past curfew, a claim reiterated Monday by Kentucky's Democratic governor, Andy Beshear.

The Courier Journal confirms the victim is David McAtee, owner of a well-known local BBQ restaurant.

It is not known who reportedly opened fire on the officers.

A Courier-Journal livestream video showed Louisville Mayor Greg Fischer visiting McAtee's family Monday, across the street from the site of the shooting.

Though downtown Louisville, like downtowns in dozens of cities, has been the site of several days of protests, the West End neighborhood where McAtee was killed — the Russell neighborhood at 26th St. and Broadway — is several blocks away and had not been central to protest action over the weekend. The West End is a majority-black and historically under-resourced part of the city.

Louisville news station WLKY reports that law enforcement fired the fatal shot, and an internal investigation is underway. In a press conference today, Beshear called for the release of all body-cam footage.

"Given the seriousness of the situation, I have authorized the Kentucky State Police to independently investigate the event," Beshear said in a statement Monday. Police say they are collecting video.

Louisville residents have filled city streets in protest of police violence around the country and at home. The March 13 shooting death of Louisville EMT Breonna Taylor has, along with the killing of George Floyd by Minneapolis police, been a national rallying cause.

Louisville police shot and killed Taylor, an EMT working during the coronavirus pandemic, in her apartment while searching for someone who didn't live there.

The FBI has opened an investigation into the shooting. The city's chief of police announced he would retire in the wake of the killing, effective June 30.

Last Thursday seven people were shot at a Louisville protest, though the mayor has said that police were not responsible. Two of the people needed surgery.

Protesters in many communities across the country have been met with aggressive actions from police over the last several days.

Officers in New York City drove an SUV through a crowd of protesters in the Flatbush neighborhood of Brooklyn. Police in Erie, Penn., maced a young woman and kicked her while she sat on the ground. In Atlanta, police tased two black college students in a car. The alarming incident, caught on camera, led to the firing of at least two officers, both also black.

Seattle police have opened an investigation into an incident in which an officer allegedly maced a child.

In addition to McAtee, at least six people have been killed during the unrest, in Minneapolis, Indiana, Detroit, and Oakland. Philadelphia police shot and killed a transportation worker Friday, claiming he would not put down a box cutter. On Sunday in Omaha, Neb., James Scurlock, a 22-year-old black man, was shot and killed while at a protest, allegedly by a white bar owner.

Police have also often seemingly targeted members of the press intentionally, without explanation.

On Friday night, Louisville police fired pepper balls at two journalists from local station WAVE 3 News while they were covering the protests.

"The two had been following police instructions, were standing behind the police line when they were fired upon, and were not disrupting or otherwise interfering with law enforcement," Ken Selvaggi, general manager of WAVE 3 News, said in a statement.

On Sunday night, President Trump blamed the media for "fomenting hatred and anarchy," as fires continued to spread in the nation's capital, and a White House guard station burned.