Trump's on his way out, but leaves a lasting legacy: The right's open embrace of terrorism

How did the Kenosha shooter post $2 million in bail? Because conservatives are normalizing right-wing terrorism 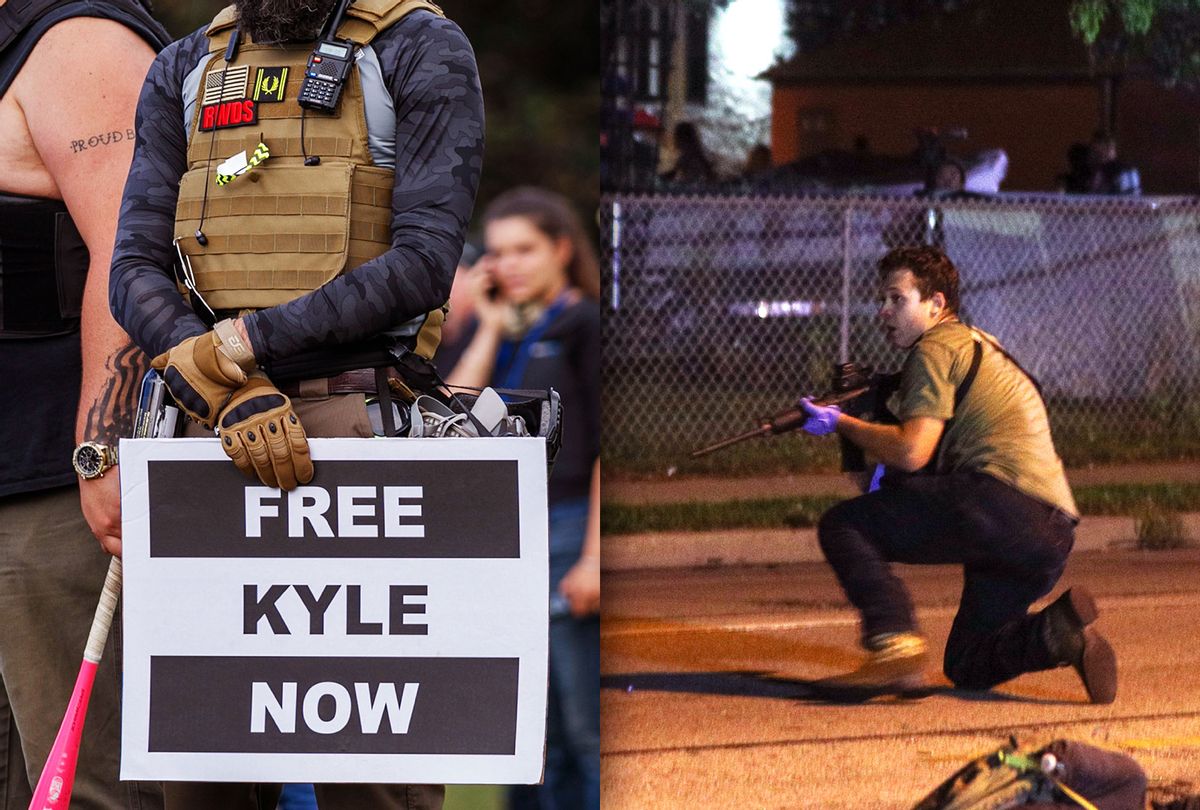 In any sensible society, Kyle Rittenhouse would be shunned across the political spectrum.

The 17-year-old Illinois resident stands accused of shooting three people, killing two of them, during an August Black Lives Matter protest in Kenosha, Wisconsin. Whatever the specific facts of that incident, the larger truth is that Rittenhouse is lying in the bed he made for himself. If he had done the right thing, by simply staying at home and leaving the protesters alone, two men would be alive and he would not face homicide charges. But because he got enraptured by violent fantasies of armed confrontation with anti-racists, Rittenhouse picked up a gun, drove across state lines and got exactly what he was looking for. The results were tragic.

In the past, Rittenhouse would have been largely abandoned, even by right-wingers who might otherwise be generally sympathetic to insecure white men playing dress-up with camo and guns. We've seen this pattern from Timothy McVeigh in the 1990s right through the Trump years. Conservatives certainly didn't embrace Patrick Crusius, the 21-year-old white nationalist accused of murdering 23 people in an El Paso, Texas, Walmart store last year. The mainstream conservative movement often flirts with right-wing extremists, but when the bullets fly or the bombs go off, conservative leaders prefer to pretend that they had nothing to do with the violence.

But Rittenhouse is free now, on $2 million bail, thanks to the conservative leaders who broke this pattern and rallied to the young man's side. Rittenhouse was aided by Christian websites fundraising for his defense, and according to his lawyer, Lin Wood — who is also involved in Donald Trump's efforts to overturn the 2020 election — assistance was also offered by My Pillow CEO Mike Lindell and '80s-era child actor Ricky Schroder. Schroder even posted a picture of himself celebrating with Rittenhouse, encouraging people to move to social media platforms like Parler that don't ban people for misinformation or hate speech. (Schroder had his own run-in with the law last year, when he was arrested on domestic violence charges that were later dropped.)

Rittenhouse has Trump to thank for the hero's treatment he's getting on the right. Along with undermining the social prohibitions against blatant racism, overt misogyny and openly trying to steal elections, Trump spent the past five years dismantling the taboo against shamelessly encouraging domestic terrorism. Trump's incitement of violence started shortly after he announced his first presidential campaign, when he fantasized out loud about physical violence against Black Lives Matter protesters in August 2015. He has continued at a steady and intensifying clip over the last five years. By the time Rittenhouse rolled into Kenosha with a gun, Trump had made it safe for conservatives to openly support political violence.

That's exactly what happened in the case of Rittenhouse. In the days after the shooting, Tucker Carlson of Fox News painted Rittenhouse as a hero, rather than a kid who was looking for trouble and found it. Soon, much of the conservative media followed. Then Trump himself got involved, insisting that Rittenhouse was justified in shooting protesters. Trump's administration even pressured the Department of Homeland Security to depict Rittenhouse as a hero, even though there was no reason whatsoever for him to bring a gun to the Kenosha protest in the first place.

Trump mostly encourages right-wing violence for the same reason he does anything: He thinks it may benefit him personally. It boosted his ego to believe people would risk injury, death or prison out of loyalty to him, and he obviously hoped a right-wing army would rise up to keep him in office after the voters threw him out. (That didn't happen, thankfully, probably because most Trump supporters are too old and comfortable to go full Rittenhouse.) When a group of would-be terrorists plotted to kidnap Michigan's Democratic Gov. Gretchen Whitmer, and likely to murder her, Trump made sure to express his delight in public, seeing the plot as a personal tribute.

This newfound enthusiasm for violence is bound to outlast Trump, whose impotent coup attempt won't prevent his eviction from the White House on Jan. 20. That's because none of this was ever about him, no matter what his ego tells him. He enabled it, of course, by using the presidential pulpit to give permission for some of the uglier urges on the right to burble up to the surface.

FBI statistics released last week show that hate crimes have risen to their highest level in over a decade, fueled — as in the El Paso shooting — by Trump's hateful and violent rhetoric.

To make this even more disturbing, as journalist David Neiwert noted at Daily Kos last week, "this floodtide has been accompanied by a notable decline among law-enforcement agencies who take hate crimes seriously."

In other words, police departments around the country are refusing to report their hate-crime data, which Neiwert says is "exacerbated by an increasingly partisan conservativism in police cultures, manifested by the open hostility of many officers to civil-rights groups such as Black Lives Matter."

It's yet another sign that, under Trump, the American right has become a lot more comfortable with domestic terrorism — so much so that many police departments, which tend to be be incredibly conservative, refuse to treat it as a serious threat. This gels with reports of police encouraging or cooperating with far-right groups who are targeting progressives for harassment, as well as fist-bumping and partying with groups who celebrate violence against the left.

Trump himself has been hiding out at the golf course since his electoral defeat, but his followers continue to promote violence against anyone who opposes their fascistic fantasies.

Rittenhouse's lawyer, Wood, went on former Trump adviser Steve Bannon's radio show over the weekend and suggested that Trump supporters back his anti-democratic coup the way "our Founding Fathers did in 1776."

Unicorn Riot, a group that tracks the communications of neofascists, has reported an uptick in violent rhetoric among the Oath Keepers, a far right militia group whose leader, Stewart Rhodes, has openly begged Trump for some kind of order to inflict violence on his opponents. Unicorn Riot tracked Oath Keepers on social media calling for "executing lefties openly and violently" and "killing the news media live on air."

It continues to be unlikely that anything resembling a trained and organized militia will rise up to inflict violence on Trump's behalf. But this kind of rhetoric can lead directly to acts domestic terrorism, as angry young men, start taking it upon themselves to "do something" rather than simply fantasize about violence online. Even when Trump is out of office, the grievances that fuel this rhetoric — the racism, the misogyny, the paranoid delusions about the "deep state" — will continue to fester.

Trump was merely the manure spread on the ground. Now the ground is thoroughly fertilized, and the violent shoots are beginning to grow.