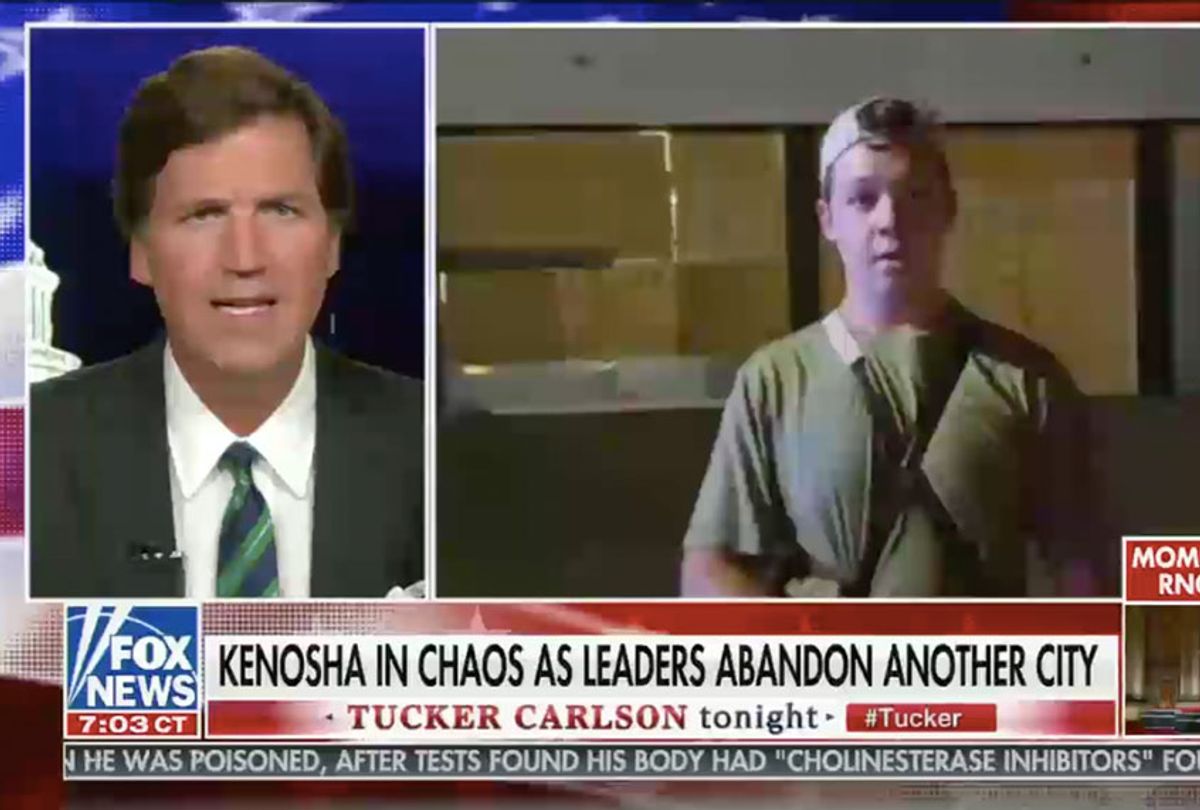 Tucker Carlson faces a growing number of calls for his removal from Fox News over allegations of "inciting violence and abetting terrorism" after he questioned why Americans were "shocked" that "17-year-olds with rifles decided they had to maintain order when no one else would."

"The first ten minutes of tonight's Tucker Carlson Tonight are the closest thing I think I've ever seen to pure, unfiltered fascism in American public life. Going out to the largest cable news audience ever," Matthew Gertz, a senior fellow for Media Matters for America, wrote on Twitter. "Fox News hosts are able to do this because the Murdochs want them to."

Carlson made the controversial comments on his broadcast after two individuals were shot to death amid continued civil unrest in Kenosha, Wis. Kyle Rittenhouse, a 17-year-old white man, was arrested on a warrant charging first-degree intentional homicide.

"So are we really surprised that looting and arson accelerated to murder? How shocked are we that 17-year-olds with rifles decided they had to maintain order when no one else would?" Carlson asked on his Fox News show. "Everyone could see what was happening in Kenosha. It was getting crazier by the hour."

The civil unrest stems from the shooting of Jacob Blake, a 29-year-old father who was seen on video being shot in the back at point blank range by police. A lawyer for the family said the now-paralyzed Blake's children were present at the time of the shooting.

Carlson faced similar backlash two years ago after he called white supremacy a "hoax" on the heels of a mass shooting targeting Latino immigrants in El Paso, in which the alleged shooter left a manifesto announcing that "this attack is a response to the Hispanic invasion of Texas."

The Fox News host made a number of false claims to support his argument about Rittenhouse, which were interpreted by many as an attempt to justify the alleged murders. Among them, Carlson falsely claimed that authorities had "abandoned" Kenosha to "watch it burn." Carlson cast blame on Democratic Gov. Tony Evers, even though he had deployed National Guard forces one day prior. Moreover, bystander video showed law enforcement on the scene.

"He just justified murder," Nikole Hannah-Jones, who won a Pulitzer Prize for her work on the 1619 Project, tweeted after the segment aired.

Other prominent figures called out Carlson and Fox News for "encouraging" murder and "inciting violence."

"This goes beyond being provocateurs," Shannon Watts, the Founder of Moms Demand Action, tweeted. "Ann Coulter, Tucker Carlson and Fox News are encouraging Americans to murder one another." (Coulter, the right-wing provocateur, for her part called for Rittenhouse to be president.)

"Vigilante violence was always one of my greatest worries about the present moment," Blake Hounshell, the digital editorial director for Politico wrote. "And here we have a prominent TV host - a man who had the president's ear - excusing it, rationalizing it."

He tweeted, "I will answer [Tucker Carlson]. My daughter was killed by an 18 year [sic] with an AR 15. Just walked into her school. Tucker, you are a fu*king lunatic who will get people killed. I hope advertisers dropp [sic] you immediately today. You should be removed for the safety of our kids."

Five advertisers, including Disney and T-Mobile, pulled their advertising from Carlson's Fox News program in June amid backlash over his "race-baiting" screed in the wake of nationwide protests against police brutality following the death of George Floyd.

That rant, during which the host told his mostly white viewers that the social justice movement was "definitely not about black lives" and to "remember that when they come for you," lasted nearly half an hour, or about 75% of the show's on-air time.

Before playing video of the Kenosha shooting, Carlson falsely claimed that "big media organizations have done their best to downplay and ignore the violence in Kenosha and around the country." (Here is a link to the Washington Post's coverage.)

The Fox News host then played a graphic video appearing to show the alleged shooter firing a semi-automatic long gun in front of a boarded-up auto shop several times, including after individuals had fled.

Carlson singled out, Richie McGinnis, an on-the-scene reporter for The Daily Caller — a conservative outlet founded by the Fox News host — who tried to use his own shirt to staunch the bleeding on one of the victims.

"Sorry for the painful video but it's real," Carlson said. "That man later died."

"At one point, the 17-year-old who has now been charged tried to run from the mob. He tripped and fell in the middle of the street," the Fox News host continued. "A man ran up and smashed him in the head with a skateboard. The 17-year-old then fired his gun."

Carlson played video of the scene he described. After the altercation, the shooter can be seen alone in the street with a body on the ground.

"So, what does that amount to? We're unsure. A court will decide whether what you just saw qualifies as self-defense. As of tonight, we really don't have more details," Carlson, who frequently arrogates the first-person plural pronoun, knitting his perspective with that of his viewers, said.

"We do know why it all happened, though," he continued. "Kenosha has devolved into anarchy, because the authorities in charge of the city abandoned it. People in charge from the governor of Wisconsin on down refused to enforce the law. They stood back, and they watched Kenosha burn."

"So are we really surprised that looting and arson accelerated to murder?" Carlson asked. "How shocked are we that 17-year-olds with rifles decided they had to maintain order when no one else would?"

Carlson included some of these same claims in a tweet promoting the controversial segment.

The alleged shooter's social media history revealed support for "Blue Lives Matter," a pro–police movement, and President Donald Trump, according to BuzzFeed News. He also had a front row seat at a Trump rally in Iowa this January.

At that rally, Trump said, "During this campaign season, the good people of Iowa have had a front-row seat to the lunacy and the madness of the totally sick left." He also added, "They want to kill our cows. That means you're next."

Multiple spokespeople for Fox News declined multiple requests to answer Salon's specific questions about Carlson on the record, including whether the network planned to take disciplinary action in response to the public backlash.

A Fox News spokesperson pointed Salon to a partial transcript of Carlson's remarks, as well as the aforementioned tweet promoting his monologue after it aired. The written copy of the tweet, which paraphrases Carlson's words, omitted his remarks about how "17-year-olds with rifles decided they had to maintain order when no one else would." When asked why Salon was pointed to a paraphrased tweet which specifically omitted that information, the same Fox News spokesperson did not respond.