The mother of Heather Heyer, the woman killed by a white supremacist in Charlottesville, calls out Tucker Carlson 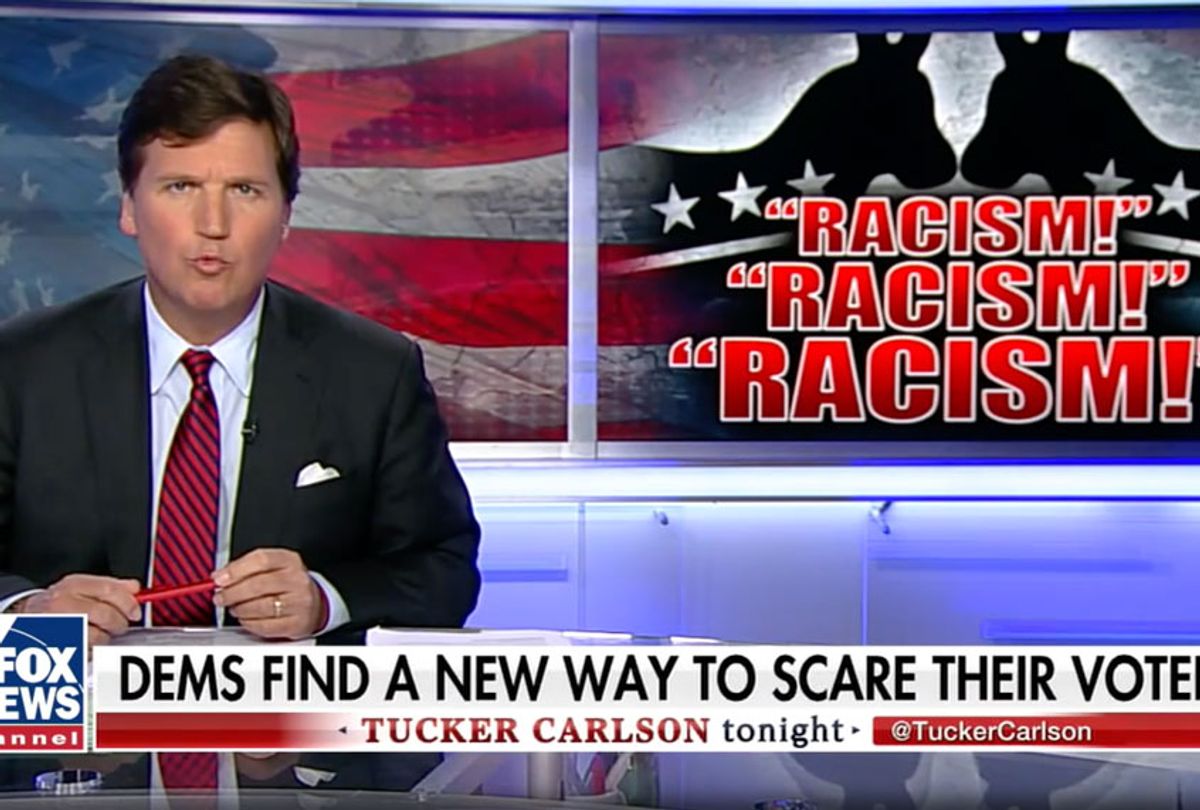 Fox News host Tucker Carlson dismissed white supremacy as a “hoax” and “not a real problem” after a gunman who targeted Latino immigrants killed 22 people and wounded dozens of others in El Paso.

Carlson, whose own anti-immigrant rhetoric was echoed across the pages of the El Paso’s gunman’s “manifesto,” claimed that white supremacy is a fake issue amplified by Democrats after even President Trump condemned white supremacy or “any other kind of supremacy.”

“It’s actually not a real problem in America,” Carlson said on his show Tuesday. “This is a hoax, just like the Russia hoax. It’s a conspiracy theory used to divide the country and keep a hold on power.”

Carlson, speaking just days after one of the deadliest mass shootings carried out by a man who said he targeted immigrants in response to the “Hispanic invasion of Texas,” claimed Democrats had invented white supremacy as a campaign ploy.

“They’re making this up,” he said. “It’s a talking point, which they are using to help them in this election cycle.”

Carlson was defended by Fox News and The Federalist contributor Mollie Hemingway, who echoed his baseless "hoax" claim:

But another Fox News contributor, Democrat Mo Elleithee, was willing to call out Carlson:

White supremacy is a bigger threat than foreign terrorism, according to President Trump’s own FBI chief.

FBI Director Chris Wray testified to the Senate Judiciary Committee last month that the FBI has seen domestic terrorism arrests increase to 100 in the past nine months alone. He said domestic homegrown terrorists posed a greater threat than foreign terrorist groups like ISIS.

“A majority of the domestic terrorism cases we've investigated are motivated by some version of what you might call white supremacist violence,” he told the committee.

FBI counterterrorism chief Michael McGarrity testified in May that the agency was investigating 850 potential domestic terrorism cases, nearly half of which involved white supremacists.

According to data from the think tank New America, violence tied to far-right ideologies have killed the same number of Americans since 9/11 as ISIS and al-Qaeda combined. An Anti-Defamation League analysis found that white supremacist murders “more than doubled in 2017,” making up “59% of all extremist-related fatalities in the US.”

Carlson’s comments also ignore that some of the most high-profile mass killings in recent years -- like the synagogue attack in Pittsburgh and the Charleston church massacre -- have been carried out by white supremacists with no ties to a specific organization. In fact, the El Paso shooter appeared more aligned with Carlson’s anti-immigrant rhetoric than a group like the Ku Klux Klan.

The gunman wrote in a hateful screed published on 8chan ahead of the shooting that he was “simply defending my country from cultural and ethnic replacement brought on by an invasion.” He wrote that he was concerned that Democrats were planning to “use open borders” to turn Texas into a “Democratic stronghold.”

Carlson has espoused these views as well. Carlson has warned that immigration will “change this country completely and forever” and claimed that Democrats want “demographic replacement” to create “a flood of voters for them.” He claimed that Trump was trying to stop an “illegal invasion of our country” from Mexico and that immigrants want to “replace you.”

“I’ve lived here 50 years and I’ve never met anybody, not one person who ascribes to white supremacy,” Carlson said Tuesday.

In April, Carlson claimed: "You could live your entire life here without running into a white nationalist," Carlson continued. "No matter what they tell you, this is a remarkably kind and decent country."

He also said "the left" uses the word racism "as a cudgel to beat their political opponents into submission and have their way."

In response to the backlash, Carlson claimed "the left wants to silence us" and told his "colleagues on other news channels" to "calm down."