Carlson, who once claimed white supremacy was a "hoax," asked if he was "required to be upset about" George Floyd 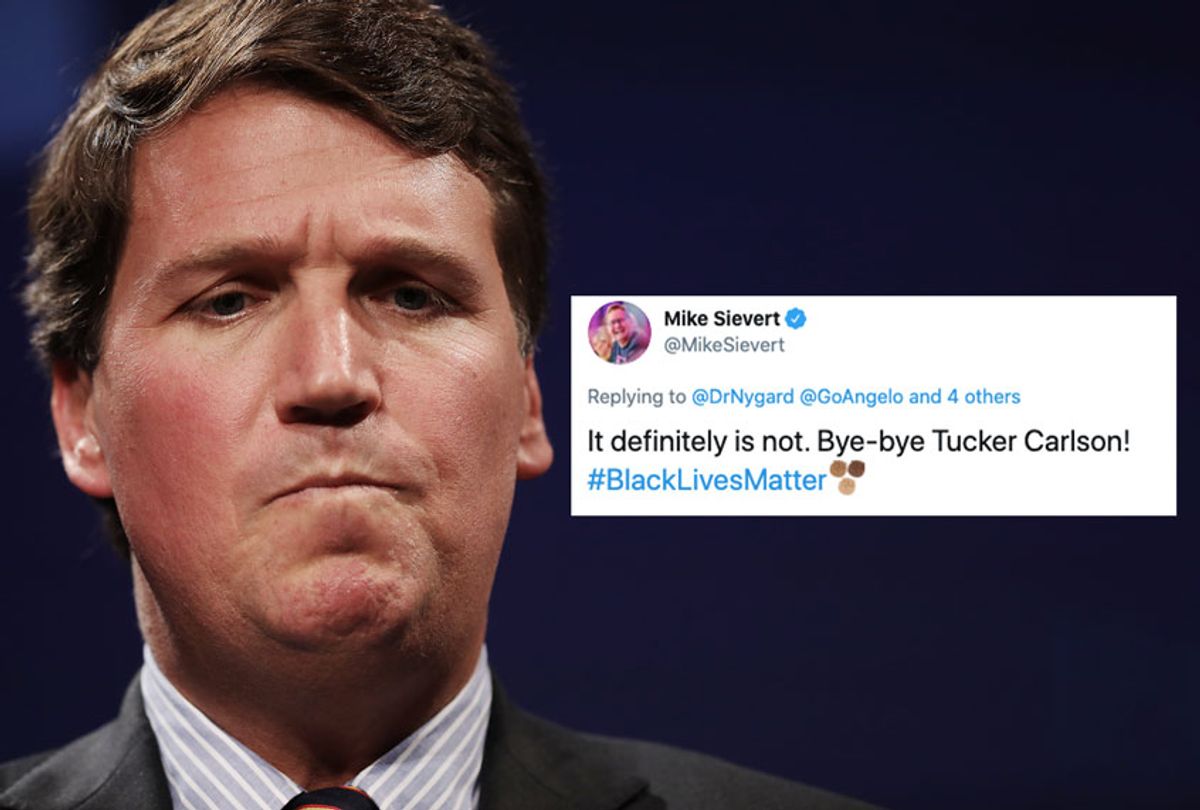 Five advertisers, including Disney and T-Mobile, have pulled all advertising from the Fox News program hosted by Tucker McNear Swanson Carlson backlash after a widely-panned, "race-baiting" screed in the wake of nationwide protests against police brutality following the death of George Floyd.

Carlson, who earlier called white supremacy a "hoax," has dubbed the protests over Floyd's death in police custody a "form of tyranny."  On Monday, he warned viewers in a 30-minute rant that Black Lives Matter intended to bring "rule in the Third World" to the United States.

"This may be a lot of things, this moment we are living through, but it is definitely not about black lives," he said. "And remember that when they come for you, and at this rate, they will. Anyone who has ever been subjected to the rage of the mob knows the feeling. It's like being swarmed by hornets. You cannot think clearly."

While right-wing pundits gave the performance rave reviews, others pointed to what they saw as openly racist invective.

"In these uncertain times, we can always count on human bowtie @TuckerCarlson to take a quick break from sailboating in Maine to broadcast race-baiting filth into peoples' parents' living rooms, inciting fear and hatred of a civil rights movement," "Top Chef" host Padma Lakshmi tweeted.

Popular Information, a political blog, reported Wednesday that while Disney had expressed support for the Black Lives Matter movement, the company had run several ads on Carlson's show this year.

In an internal May 30 memo, five days after Floyd's death, Disney executives said "now, more than ever, is the time for us all to further strengthen our commitment to diversity and inclusion everywhere."

Disney acknowledged to Deadline that it had paid for nearly 30 ads on the platform, though the ads "were placed on the show without our knowledge by third party media buyers." The company said it instructed the buyers to stop.

Popular Information also reported that T-Mobile had advertised on Carlson 27 times this year.

In response to questions about whether the company planned to pull its ads, the official T-Mobile account tweeted: "Of course. We haven't run ads on Tucker Carlson Tonight since early May and have cancelled all future placements. We will continue to support those who stand against racial injustice."

The host, who is worth a reported $20 million and whose stepmother is an heir to the Swanson frozen-food empire, said last week that black celebrities such as Janelle Monae and Lil Nas X had been "paying to get violent rioters out of jail" by donating to bail funds.

He also wondered aloud why he and his audience — which is mostly white — should be "required to be upset about" Floyd's death if they are not from Minneapolis.

(Carlson grew up outside of San Diego, where he attended La Jolla Country Day School. However, his father also owned property in Nevada and Vermont, as well as islands in Maine and Nova Scotia. He later attended St. George's preparatory school near Newport, R.I., and went to Trinity College in Hartford, Conn.)

More than 25 companies pulled ads from Carlson's show in late 2018 after he declared that undocumented immigrants made the country "poorer, and dirtier and more divided."

Carlson lost more advertisers the next year when he proclaimed that white supremacy was a "hoax" after a white man targeted immigrants in a mass shooting in El Paso. The shooter accused of carrying out the massacre wrote in a racist screed that "this attack is a response to the Hispanic invasion of Texas."

(That same day, Carlson himself sold his remaining stake in the Daily Caller, the conservative publication he co-founded in 2010.)

Carlson also took shots at other networks that evening, claiming coverage of the coronavirus pandemic was dangerously overblown and manipulative. As alleged proof, he played a montage of CNN host Chris Cuomo broadcasting caution from his basement, where he had self-quarantined after contracting the disease.