In December, 26 advertisers dumped the host after his racist declaration that immigration makes the U.S. “dirtier” 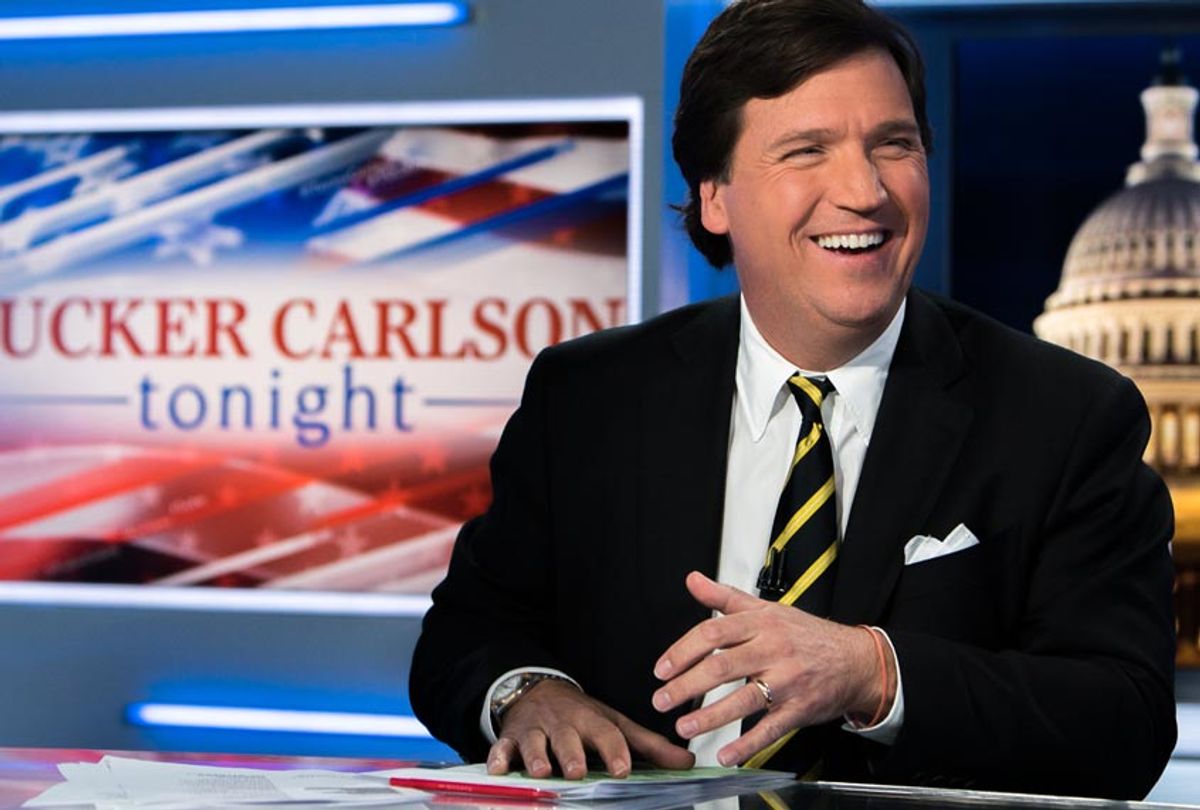 Fox News and host Tucker Carlson have lost more advertisers in the wake of the racist and false remarks the conservative commentator made this week about white supremacy — specifically, that it is a "hoax just like the Russia hoax" that has been promoted by the media.

"It's a conspiracy theory used to divide the country and keep a hold on power," Carlson alleged Tuesday night before he claimed that he had evidence to support his false claim.

"I've lived here 50 years, and I've never met anybody — not one person — who ascribes to white supremacy," the Fox News host offered as his apparent form of proof. "I don't know a single person who thinks that’s a good idea."

Carlson's racist remarks earned the praise of former Ku Klux Klan leader David Duke, one of the nation's most infamous white supremacists, who declared on Twitter that “Tucker is RIGHT! White Supremacy is a ZioMedia Conspiracy Theory! The term itself is a lie."

In the wake of controversy, two companies have announced they will no longer advertise on "Tucker Carlson Tonight." Nestlé and HelloFresh, which have both advertised on Carlson's show in the past, told The Hollywood Reporter (THR) they have no plans to continue advertising on Carlson's show.

Long John Silver will no longer advertise on Fox News, according to Media Matters.

Carlson has incited an advertiser exodus in the past. In December, 26 advertisers dumped the pundit after his racist remarks that immigration makes the U.S. "poorer and dirtier."

At the time, Fox News expressed support for Carlson's opinions, saying it was "a shame that left-wing advocacy groups, under the guise of being supposed 'media watchdogs,' weaponize social media against companies in an effort to stifle free speech."

The network also called the companies' decisions to pull their ad dollars "unfortunate and unnecessary distractions," alleging that liberal activist groups "never target other broadcasters and operate under a grossly hypocritical double-standard given their intolerance to all opposing points of view."

It remains unclear if Carlson, who is set to return to Fox News on Aug. 19, will lose his spot at the network. In the last eight months, since his comments about immigration, Carlson's show "has come to rely more on smaller direct-marketing companies that are less likely to cut ties, though a few major brands — such as Starkist, Sandals Resorts and Nutrisystem — have remained consistent advertisers," THR reported.

Fox News has not commented publicly on Carlson's remarks, but a spokesperson told Salon that the host's vacation was pre-planned and claimed it was not a response to the backlash.

In March, after Carlson came under scrutiny for sexist, racist and homophobic remarks he made in the past about minority groups, Fox News host Sean Hannity told viewers that his colleague "was going to be off this week . . . [but] he's not going to take the mob's crap, and he came into work to stand up to this."

A Fox News spokesperson told Salon the vacation Carlson was supposed to take at the time was also scheduled in advance.

In April 2018, Fox News co-president Jack Abernethy issued a statement confirming that host Laura Ingraham would return from vacation after she mocked Parkland shooting survivor David Hogg. The incident caused Ingraham to lose the support of well more than a dozen advertisers.

"We cannot and will not allow voices to be censored by agenda-driven intimidation efforts," Abernethy said at the time. "We look forward to having Laura Ingraham back hosting her program next Monday when she returns from spring vacation with her children."

Ingraham's vacation was pre-planned and not in response to the backlash, a Fox News spokesperson told Salon.

In April 2017, former Fox News host Bill O'Reilly announced he would be taking an Easter vacation amid an advertiser boycott. He was later fired by the network amid mounting allegations of sexual misconduct.

That same month, O'Reilly protégé Jesse Watters abruptly announced he was taking time off after resounding backlash to his inappropriate comment about first daughter Ivanka Trump, which he claimed was not meant to be a sexual innuendo. It was Watters' first week in his new primetime slot.

Fox News told Salon that those vacations were also scheduled in advance and not responses to the scandals.

For now, any potential impact of Carlson's remarks and the ensuing advertiser withdrawals remains unclear.

Before announcing his planned vacation Wednesday, Carlson attempted to pour cold water on the controversy surrounding his remarks.

"I want to take a second to pass on a sincere message to officials in Washington, and particularly, to our colleagues on other cable news channels," Carson said. "And it's this: Please, for the sake of the nation, calm down."