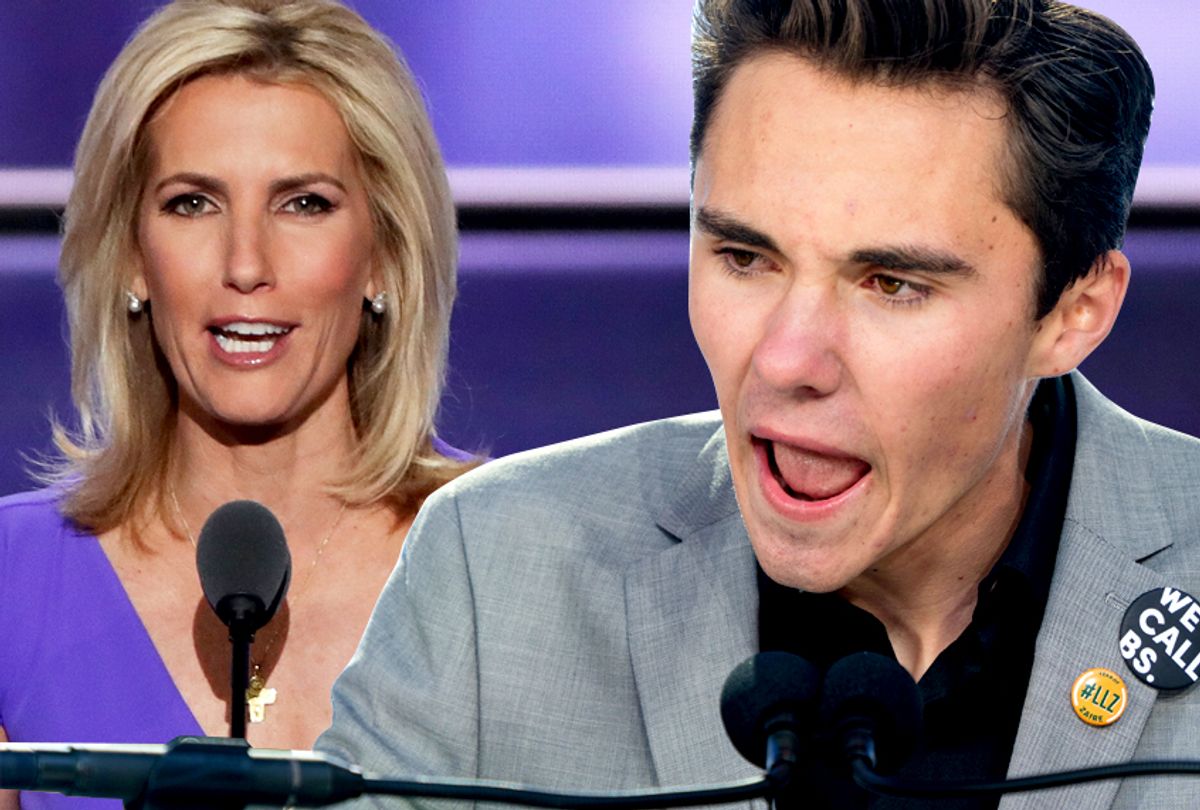 "Any student should be proud of a 4.2 GPA — incl. [David Hogg]," Ingraham tweeted. "On reflection, in the spirit of Holy Week, I apologize for any upset or hurt my tweet caused him or any of the brave victims of Parkland."

"For the record, I believe my show was the first to feature David immediately after that horrific shooting," Ingraham said, adding she "even noted how 'poised' [Hogg] was given the tragedy," and that "he's welcome to return to the show anytime for a productive discussion." Ingraham shared a link to her first interview with Hogg on the day of the shooting at Marjory Stoneman Douglas High along with the apology tweet.

The "Ingraham Angle" host's apology comes after companies TripAdvisor, WayFair, and Nutrish announced they would remove its ads from Ingraham's show in response.

In a statement Thursday, TripAdvisor said it does not "condone the inappropriate comments made by the broadcaster in this view."

"In our view, these statements focused on a high school student cross the line of decency. As such, we have made a decision to stop advertising on that program," TripAdvisor said.

Hogg tweeted his support for TripAdvisors response, thanking them for pulling their advertisements.

On Wednesday, Ingraham shared a Daily Wire story that reported Hogg was rejected from four colleges.

"David Hogg Rejected By Four Colleges To Which He Had Applied and whines about it. (Dinged by UCLA with a 4.1 GPA... totally unpredictable given acceptance rates," Ingraham wrote on Twitter.

Hogg, who has become a vocal advocate for gun control and a target of conservatives, replied a few hours later, asking who the Fox News host's biggest advertisers were in a tweet. He later shared a list of Ingraham's top advertisers on Twitter and directed users to contact those companies and express their frustration with the news anchor.

A speech delivered by Hogg at Saturday's March For Our Lives protest in Washington, D.C., dubbed over with an Adolf Hitler speech, was shown on Jones' program. Another of Jones' videos illustrated González as a member of the Hitler Youth. The footage contained Nazi imagery and clips of the Hitler Youth organization interposed with Saturday's rally.

Jones added, "They're calling for us to be banned and saying that grown adults cannot respond to other grown adults — high school seniors — up there on the stage telling us it's our fault. And that old people are bad, and that guns are bad, and that they're the future, and they're going to take all of our rights, and our children's rights and that we can't even criticize these little PR stuntmen and women."