Jones' fear mongering knows no bounds, as he compares March For Our Lives to the Hitler Youth movement 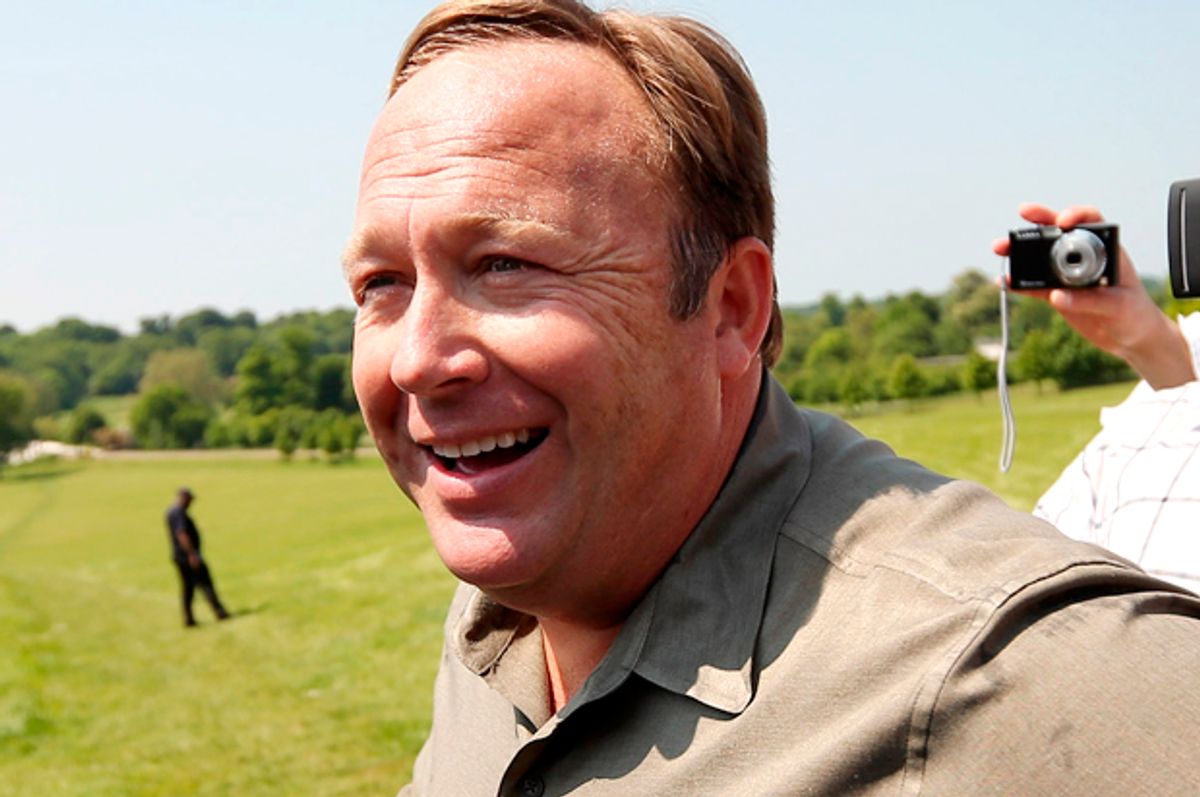 The right-wing attacks against the Parkland, Florida school shooting survivors are persisting and only growing more extreme as time goes on.

Infowars' Alex Jones was the latest conservative to take a swing at the teens spearheading a movement, when he rolled video clips on his broadcast of Marjory Stoneman Douglas High School students David Hogg and Emma Gonzalez that depicted them as Nazis.

In a full-blown rage at this point, the far-right conspiracy theorist added, "They're calling for us to be banned and saying that grown adults cannot respond to other grown adults — high school seniors — up there on the stage telling us it's our fault. And that old people are bad, and that guns are bad, and that they're the future, and they're going to take all of our rights, and our children's rights and that we can't even criticize these little PR stuntmen and women."

Jones also claimed there were parallels between the two "youth marches" that people simply can't deny.

But this is hardly the first time Jones has waged vicious and defamatory attacks on the Parkland survivors, something plenty of other conservatives also participated in, in the wake of the shooting. But even as Jones faces an unrelated lawsuit over other entirely fabricated conspiracy theories, it has always been in his DNA to double-down.

Students faced these attacks because of their staunch activism and calls for the nation to act on guns. Many of the survivors have also condemned powerful special interest groups and have blamed them for perpetuating the gun crisis, and further dividing the country, such as the National Rifle Association.

Jones went on to insist that he was not calling Hogg or Gonzalez Nazis, but rather, comparing their movement to the Nazi movement from the early 20th century in Germany.

"I want to be clear, I'm not saying David Hogg's a Nazi, I'm not saying any of them are," Jones said. "I'm saying the ideology of the left that's identity based is how the Nazis were based."

He added, "And I'm saying their move to only allow select groups to have weapons is a Nazi-based system, or authoritarian-based system, and big youth marches and emotion and manipulating the youth, was the staple of the communists, the fascists, the Nazis, you name it."

Hogg and Gonzalez have been subject to a barrage of right-wing attacks that don't appear to be slowing down, so long as the students continue their push for common sense gun measures. Nearly all of the attacks are based upon either a fundamental misunderstanding or a blatantly dishonest portrayal of how students and the country have called for sensible action on guns in America.

Not long after the tragedy in February, polls indicated widespread support for reasonable measures that have nothing to do with taking away Second Amendment rights, or the confiscation of weapons from citizens.