After Parkland, conservatives embrace the conspiracies

The Trump era has helped usher in vile and conspiratorial rhetoric, as conservatives look to silence survivors 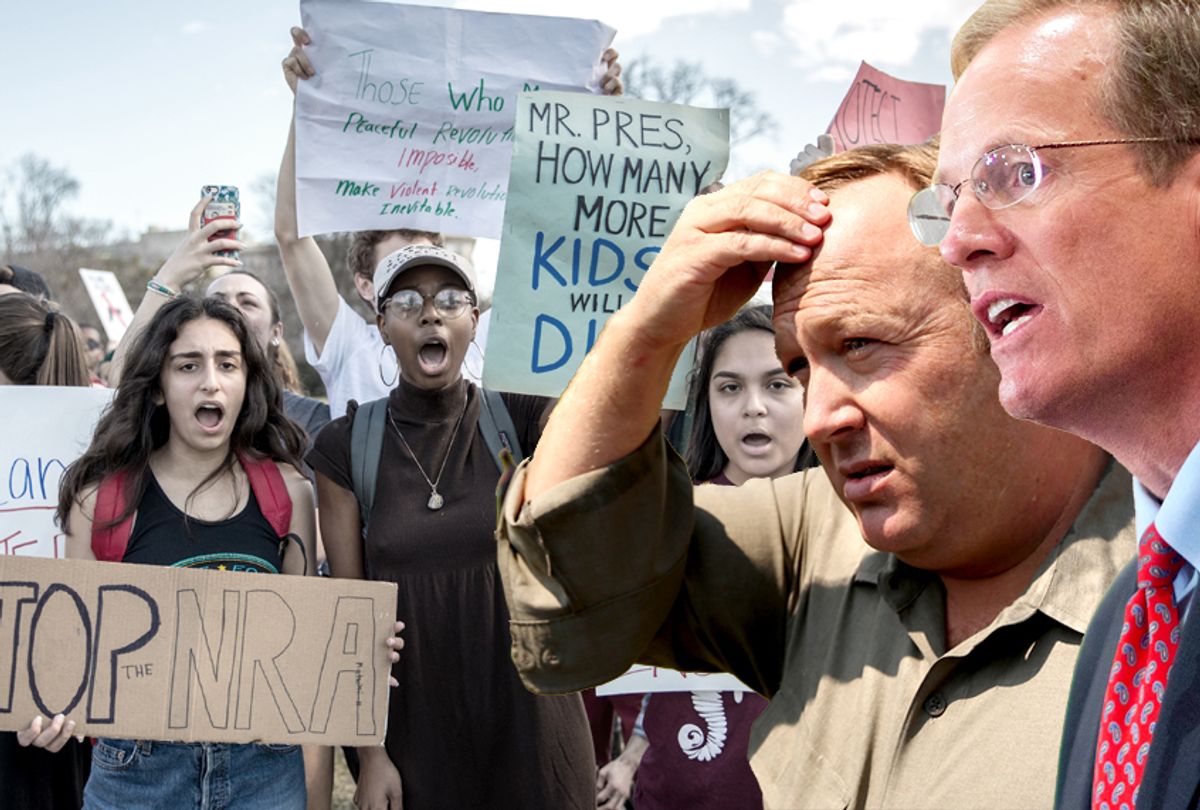 President Donald Trump is something of a Trojan horse. When he descended the golden escalator of Trump Tower in June 2015 to announce his candidacy, he brought with him some of the worst elements of America.

Ushered into the mainstream over the next couple of years would be one of the fringe elements of conservatism — conspiracy theories, many of which were embraced by the president, of all people. And though once upon a time, Alex Jones lived in his own cocoon of the media universe, he now has the ear of the White House.

After 17 students at Marjory Stoneman Douglas High School in Parkland, Florida were murdered on Valentine's Day — slaughtered by a 19-year-old with an AR-15 — the conspiracy theorists sprung to life, targeting teenagers who made it out alive and ignited a movement to ensure that no one would have to endure a tragedy such as that ever again.

Alex Jones labeled the protesters "crisis actors," and on Infowars, he pushed the idea that the entire shooting could be a false flag, one that, naturally, was concocted by the Democrats. But he also acknowledged that a shooting "left as many as 17 dead."

CNN strutted out former Republican congressman and commentator Jack Kingston, after he questioned whether the students who had spoken out were even legitimate students and called them pawns of a leftist gun-grabbing conspiracy by multi-billionaire George Soros.

It wasn't long before the president's son, Donald Trump Jr., joined in, liking tweets that claimed outspoken 17-year-old student David Hogg was trained in gun control talking points by his father, who was in the FBI.

Elsewhere, conservatives danced with glee over the sorrow felt by mourning students.

Take Fox News host Tucker Carlson. This past week, he said the mainstream media was using the surviving students as a "human shield" to push a gun control agenda. Carlson claimed there were real questions that "need to be debated by smart people sincerely trying to make the country better" — as if he or conservatives have ever once wanted to engage in a conversation about guns.

Wittingly or not, the extremity of discourse in the Trump era has been ushered in, at least in part, by Trump's style of politics, truth-spinning and lies. The American political framework has long been flawed, and it's nearly impossible to operate under the guise that Trump is some unforeseen aberration that wasn't welcomed by the repressive politics of our country's past. But Trump does indeed pose unique and brazen threats to the body politic that the country is simply not accustomed to. Perhaps the U.S. is ill-equipped to combat it.

For quite some time now, it's seemed that America has lost its ability to have even the slightest substantive, rational debate about politics. It certainly feels that way in today's environment. In the past there were, at the very least, an agreeable set of facts. But there is no debating with people who consistently operate in bad faith. And any time wasted on giving them an on-air platform to spew their nonsensical opinions is shameful, and it further demonstrates how the media never actually learned its lesson from the 2016 election. It's time to stop pretending as if these types of arguments are coming from a position of good faith or rationale when it's so abundantly clear that they aren't.

There is an underlying signal amidst all of this. A signal that America's democracy is battered to the point where it might as well be ruled ineffective. When scores of teenagers have to plead, cry and yell on national television with lawmakers to simply pass legislation that could help thwart future slaughter, only to be met with brutal conspiratorial opposition — even as a majority of the country supports gun control and 97 percent want universal background checks —  it's a sign that corporate power has drowned the voices of the many for the profits and interests of the few.

Maybe we all should just listen to the kids.