"The strong and the violent oppress the weak and the unarmed," the Fox host says as another unarmed black man dies 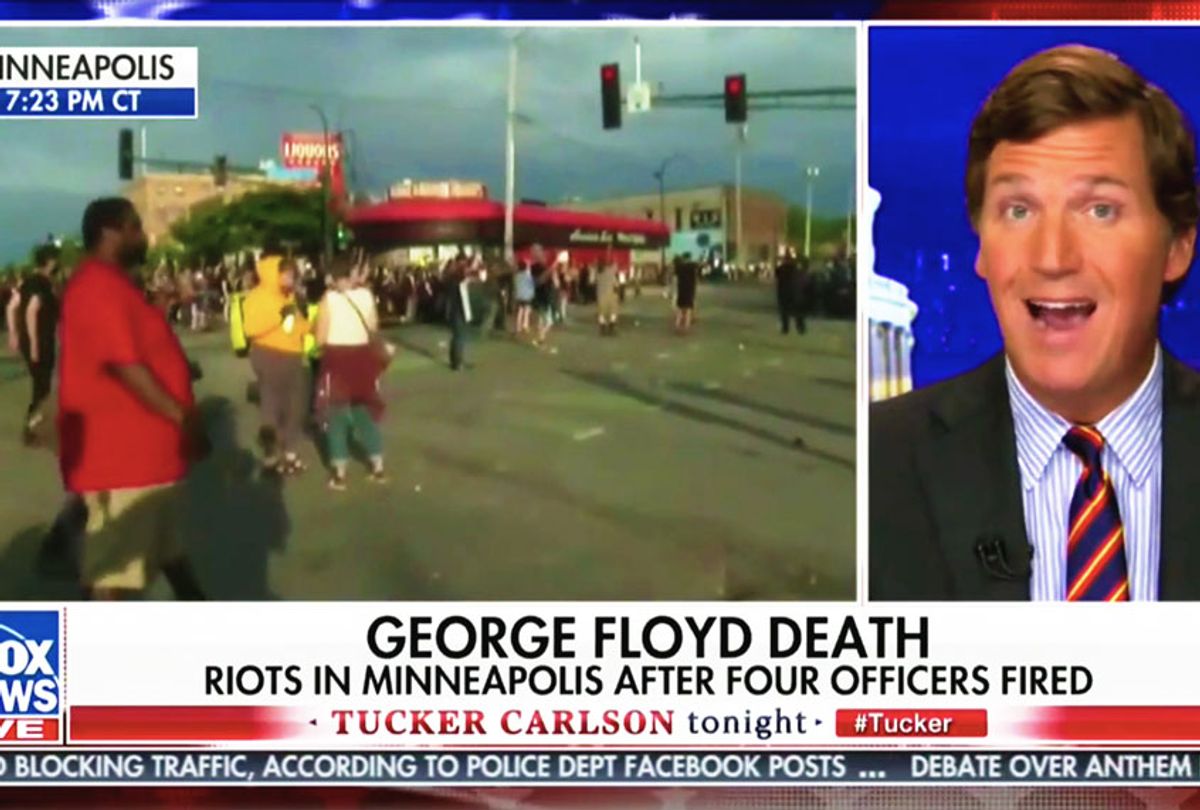 Fox News host Tucker Carlson, who has called white supremacy a "hoax" and "an attack on white people," described this week's protests in Minneapolis against police brutality as "a form of tyranny."

"That's what rioting looks like," Carlson told his audience Wednesday after playing video of protesters uninterrupted for 55 seconds. "It happened last night. As you can see, it's happening right now. We want to be clear: We're not showing you these pictures to defend the behavior of individuals on the Minneapolis Police Department. We're not — we are defending society itself. Rioting is the one thing you don't want."

George Floyd died after a white police officer kneeled on his deck. Carlson then drew a comparison between Flloyd's death and a black birder who recorded a white woman calling the police on him after he asked her to put her dog on a leash Monday morning in Central Park.

"Ugly opinions, police brutality, officious birdwatchers, rude entitled ladies walking their dogs in big city parks — all of that is bad, but none of it is nearly as bad as what you just saw," Carlson said, implying that the protests were worse than the slaying of the unarmed man who sparked them.

"The indiscriminate use of violence by mobs is a threat to every American of all colors, and backgrounds and political beliefs," Carlson continued, associating civic anger with race.

"Democracy cannot exist when people are rioting," he said. "Rioting is a form of tyranny. The strong and the violent oppress the weak and the unarmed. It is oppression."

The First Amendment to the Constitution shields free speech, including the right to protest.

Carlson then turned by way of contrast to CNN's coverage of the events. His rival network labeled as "protests" — not "riots."

"This was not a political protest — it was a riot," Carlson said. "CNN welcomes it — in fact, encourages it. On CNN, the rioters became protesters."

Carlson then played a CNN segment featuring a black male correspondent's coverage of the protests.

"That was lying," the Fox News host alleged.

Following the tumult that rocked Baltimore in the wake of the police slaying of Freddie Gray, linguist Nic Subtirelu analyzed how different news outlets used the terms "riots" and "protests." He found that conservative outlets, such as Fox News, were more likely to use the term "riots," thereby "eras[ing] the political messages and purposes of people in Baltimore."

However, Fox News headlines have also labeled the recent Minneapolis protests as "protests" — not "riots." This includes a headline which ran the morning after Carlon's segment above a report that a person had been killed overnight.

Carlson wrote off white supremacy as a "hoax" and "not a real problem" last year after a gunman killed 22 people and wounded dozens of others in Texas, specifically and admittedly targeting Mexican immigrants.

"Diverse countries can only survive if the groups within them co-exist peacefully, and thankfully almost everybody in America wants to co-exist peacefully," Carlson — who, like the El Paso gunman and President Donald Trump, has described undocumented immigration as an "invasion" — said Wednesday.

"But news organizations like CNN do not want that, and that's why every day they work hard to fan racial resentment to make different groups distrust and hate one another," Carlson continued. "That can't go on forever, because if it does, things will fall apart very quickly."

Fox News hosts, including Carlson, have routinely stoked anti-lockdown protests amid the coronavirus pandemic, which have increasingly hosted outward threats of political violence, including assassination.

All four of the Minneapolis police officers involved in the George Floyd case have been fired.

You can watch the clip below via Media Matters: