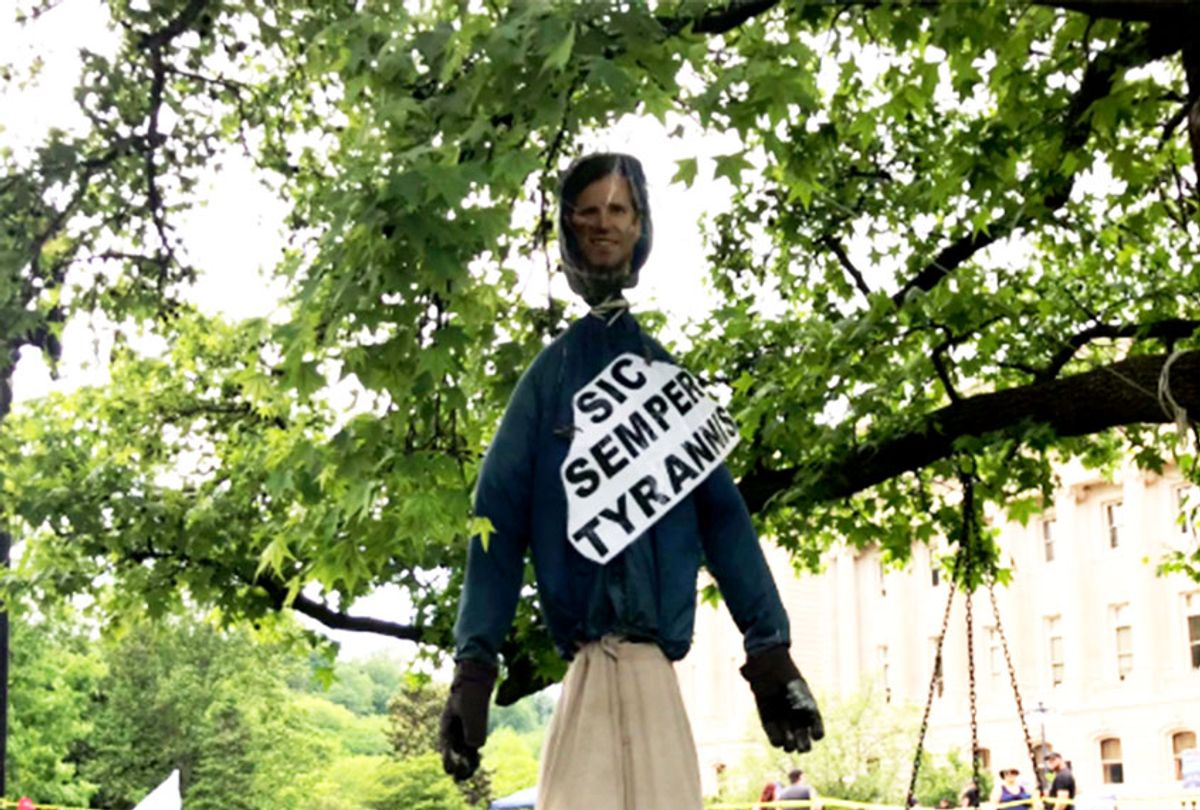 During a rally protesting Kentucky's statewide economic restrictions on Sunday, anti-government protesters, working to the tune of Lee Greenwood's "God Bless the USA," strung up a stuffed dummy bearing a picture of the face of Democratic Governor Andy Beshear from a tree outside the governor's mansion.

"Come out, Andy," the protesters chanted outside of the home where the governor and his family, including his two young children, live.

Officials from both parties immediately denounced the act as "hateful" and "vile," and at his daily press briefing on Tuesday Beshear called it "a celebration of assassination on our capitol grounds."

He placed the blame squarely on Republican lawmakers in his state, telling them, "You cannot fan the flames and then condemn the fire."

The governor then took a dig at the Three-Percenters, the fringe anti-government, pro-Second Amendment militia who had members present at the hanging of the effigy. Terry Bush, the president of the Kentucky 3 Percenters group and the person who hoisted the effigy into the tree, was fired from his job on Tuesday for his role in the protest.

"This small group — way less than 3% — is trying to bully everyone else into doing what they want us to do," he said.

"But they didn't get there alone," he continued. "They have been embraced and emboldened by elected leaders that rallied with them weeks before."

Republican state lawmakers had joined a similar rally outside the mansion earlier that month, where they attacked Beshear in incendiary terms.

"Standing in front of a radical militia group, these elected officials claimed that people including me aren't Christian, and even told them that people wanted babies to be murdered," Beshear said, after pointing out the protesters had gathered "just a window pane away" from where his children play.

"Those at the previous rally — those elected officials that embraced these individuals — they are in part responsible for what did happen," Beshear said. "And all elected officials can no longer actively seek the support and cater to these groups like we have seen."

President Donald Trump and allies have increasingly politicized the economic restrictions in an effort to turn public health precautions based on science into a national partisan debate. Right-wing special interest groups and GOP megadonors have organized and bankrolled this protest movement, which has ingested extremist groups around the country.

Democratic governors have been some of their most frequent targets, and Beshear is not the first to be threatened with assassination in effigy. Earlier this month protesters strung up a doll representing Michigan Governor Gretchen Whitmer on the steps of the capitol building in Lansing.

"Right is right, and wrong is wrong, and you can't wait until something nasty and horrible happens to then claim it's wrong, while you've catered to the support of certain groups for votes or other reasons," Beshear said on Tuesday.

"And you certainly can't write a column blaming the media and then claim it's because no one's playing baseball. That's wrong and that writer knows it and everybody else does too," he added, taking a shot at CNN contributor Scott Jennings.

Jennings had responded to the effigy with a column in the Louisville Courier Journal that boiled the event and other partisan divisiveness down to the country's current lack of a professional baseball season.

"Baseball brought us back together after 9/11," wrote Jennings, a former Mitch McConnell campaign operative and career PR rep whose firm represented Nick Sandmann, the Covington Catholic High School student who later sued CNN and other media outlets for defamation over their coverage of an incident involving Sandmann following the March for Life in Washington, D.C.

"Print whatever it takes to get these guys on the field!" Jennings wrote, defying Republican calls for fiscal austerity even amid the historic economic collapse. "We've spent $2.4 trillion on coronavirus relief so far. How much do we need to get major and minor league baseball going right now? Whatever the number is would be well worth it."

Later in the press conference, Beshear alluded to the dark history of lynching in his state, where at least 186 African Americans were hanged between the Civil War and 1934.

"Let's not ignore that the hanging was intended to send a message to others," he said. "One of intolerance and one of hate. I could never understand the depths of pain that this symbol causes to many of my fellow Kentuckians, but I can condemn it outright as wrong as vile and as evil."

"If our unity scares a couple of people, our unity is special and we're going to continue to do the right things with it," he said.