Trump is falling way behind with female voters. His response? "Lock her up!"

Misogyny helped Trump in 2016, and he wants to repeat by attacking Gretchen Whitmer — but so far it's not working 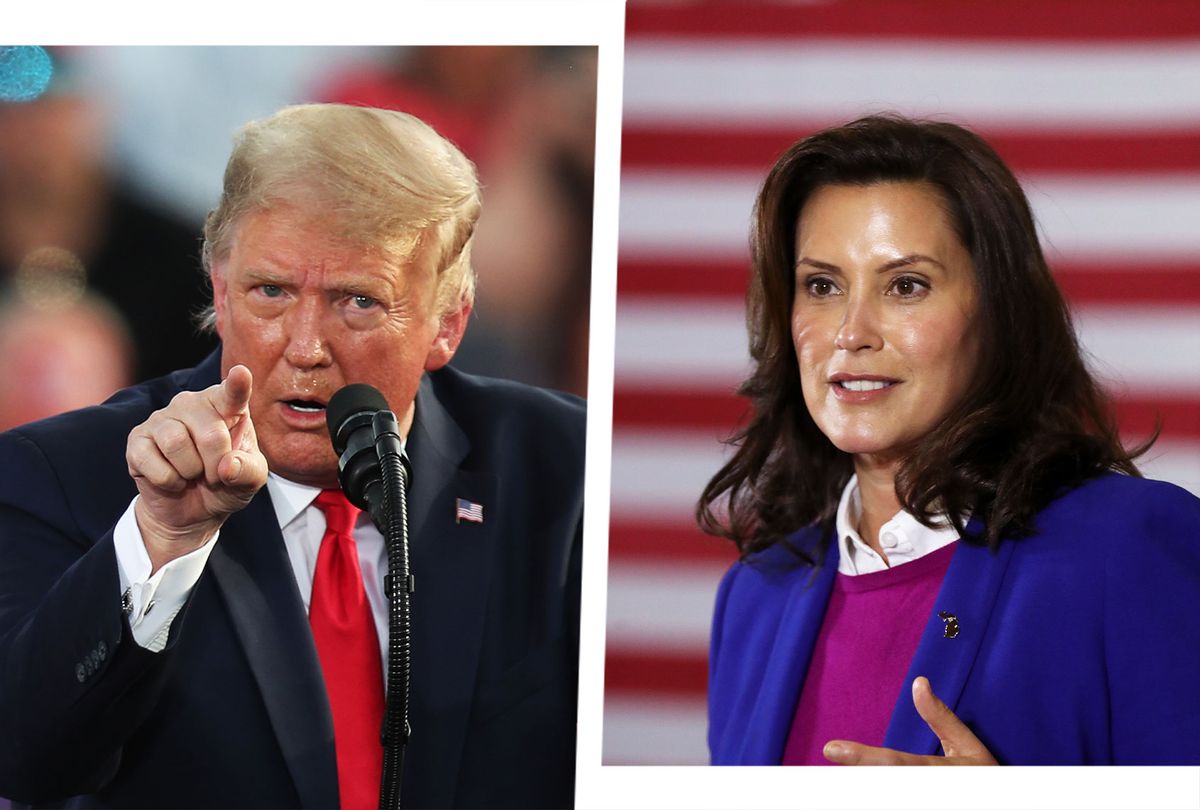 Donald Trump is getting hammered, badly, by female voters in the national polls. In the latest NPR/PBS poll, Democratic nominee Joe Biden is leading Trump among women by 25 points. The Washington Post/ABC News poll shows a similar spread, with Biden beating Trump by 23 points with women. Even the Fox News polling data puts Biden ahead of Trump by 19 points among female voters. Trump is doing much better with male voters, but considering that women tend to vote at higher rates than men, Trump simply can't count on male support to push him to another Electoral College victory.

Facing a very high chance that female voters will send Trump packing in November — FiveThirtyEight's odds of a Biden victory, as of Monday morning are at 88% — how did the pussy-grabbing president react? By laughingly encouraging a crowd in Michigan, at another of his largely mask-free rallies, to chant, "Lock her up!"

"Lock her up? Lock them all up!" Trump responded in glee.

That chant was a Trump-rally greatest hit in 2016, aimed at Democratic nominee Hillary Clinton on the fallacious grounds that she had supposedly committed some crime for which she was escaping justice. (As usual, this was pure projection from Trump, who knew at the time he was a tax fraud and serial sexual assailant, whereas decades of effort to turn up some kind of malfeasance to pin on Clinton have resulted in bupkis.) This time, even that thin pretense was dropped, as the chant was aimed at Michigan's Democratic governor, Gretchen Whitmer, who hasn't been accused, even falsely or facetiously, of committing any crimes.

Whitmer's only "crime" is being a woman — and a conventionally attractive woman, at that — who Trump can't control. Trump has spent months publicly lashing out at Whitmer, who, like most Democratic governors, rejected Trump's demands that she ignore public health recommendations to slow the coronavirus spread. Instead, Whitmer instituted restrictions that have likely saved tens of thousands of lives. Trump and his loyal followers haven't let go of this, and keep obsessing over what he clearly sees an unforgivable act of female defiance.

"Lock her up!" was always a misogynist battle cry, a prescription offered by Trump and his followers for any and all women who commit the "crime" of thinking themselves equal to men. Aimed at Whitmer, the charade that this was ever about anything but misogyny has been dropped.

The sadism of all this is particularly gruesome, in light of the recent arrest of a group of would-be domestic terrorists who were plotting to kidnap Whitmer, and perhaps murderer. The all-male would-be kidnappers fantasized about holding a "trial" for Whitmer on made-up charges before killing her, showcasing the extremely toxic, anxiety-ridden masculinity that Trump is calling forth from his most avid supporters.

It is traditional in more Politico-style publications, to attribute Trump's behavior in cases like this to some kind of "strategy," perhaps complete with quotes from Republican consultants eager to spin this to make their candidate look savvy. Hell, maybe Trump really does think this sort of grotesque malice toward women he's marked as disobedient will drive up his margins among resentful white men, and drag more of them to the polls.

But it's more likely that this is just Trump and his voters, throwing a massive temper tantrum, exposing the immaturity and insecurity that has always underpinned right-wing notions of masculinity. After all, Trump — who always had poor impulse control — has been even less in charge of his motormouth lately, complaining even more than usual during his speeches about how he doesn't want to lose and lashing out at voters, especially women, for rejecting him.

It's rational to be concerned this might work, of course. While racism was a leading factor in driving voters to Trump in 2016, sexism was right up there with it. Research shows that harboring beliefs characterized as "hostile sexism" — which is to say anger at women for speaking up or wanting equality — was as strong a predictor of a Trump vote as harboring racist beliefs. Those same voters are out there, chanting "lock her up" at rallies.

But what may have changed is that there's a strong feminist response to this misogyny this time around. In 2016, American women who didn't like this kind of sexism were cowed by sneering accusations of being "vagina voters," sometimes even from the left. There was a general fear of being seen as hysterical for raising the alarm about sexism, especially when it seemed almost certain that Clinton would win the election.

Clinton's defeat came as an emotional shock to the system, not just for many American women, but also for men who feel repulsed by the levels of sexism that clearly still exist in our society.

While it feels roughly one billion years ago in Trump years, it was less than four years ago that millions of people (most but by no means all of them women) hit the streets for the Women's March, likely the biggest single-day protest in American history. That anger and momentum fed into the 2018 midterms, where a record number of voters turned out and Democrats swept to victory in the House on the backs of female voters, 59% of whom voted for the Democrats, whereas just 54% of women voted for Clinton in 2016. Even among white women, a slight majority of whom supported Trump in 2016, shifted left, even as 60% of white men stuck with Republicans.

"Barring a giant polling error, the 2020 election will witness the largest gender gap in partisan preference since women gained the franchise," Eric Levitz writes in New York. "In 2016, the gender gap in voting preference was 20 points; if current polls hold steady, it will be 28."

It's telling that Trump and his followers respond to this not by considering what it would take to attract more female voters — dialing down the misogyny a bit, perhaps? — but instead by chanting "Lock her up" at yet another female politician. Fear of women's autonomy, along with racism, has been one of the twin carburetors driving Trumpism.

The irony is that Trump and his largely male supporters, by expressing such overt hatred, have caused exactly what they fear to happen: Women turning away from them in increasing numbers. Plenty of women didn't want to believe that patriarchy is still a problem, but it's hard to deny that  when men are literally demanding women be locked up. Two weeks remain until the election, of course, and it's conceivable that some of the women who currently tell pollsters that they're voting against men's wishes will chicken out by Election Day. But right now, there's a good chance that women are hearing Donald Trump and his fans chant "Lock her up" and realizing that they have to fight for their freedom.