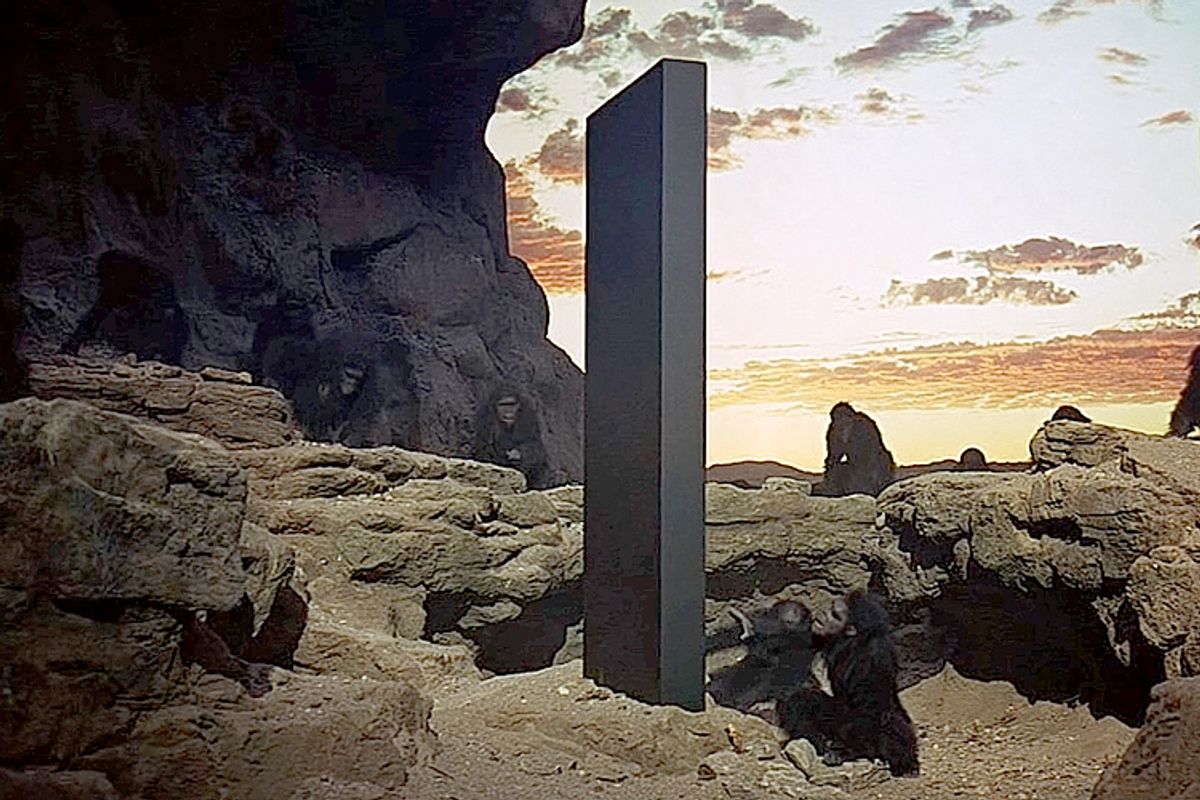 Updated Monday, November 30: Just days after the "2001"-esque monolith appeared — and then vanished — in Utah, another similar-looking structure has appeared in Romania. According to the Daily Mail, the shiny triangular structure was discovered on Batca Doamnei Hill, in the city of Piatra Neamt, in northern Romania, facing what is known as the Holy Mountain.

Neamt Culture and Heritage official Rocsana Josanu told Euro Weekly that an investigation has begun. "We have started looking into the strange appearance of the monolith. It is on private property, but we still don't know who the monolith's owner is yet," she said. "It is in a protected area on an archaeological site. Before installing something there, they needed permission from our institution, one that must then be approved by the Ministry of Culture."

Earlier: As mysteriously as it was discovered in the Utah desert on November 18, the 10-foot-tall, silver monolith evoking one of the most potent images from Stanley Kubrick's "2001: A Space Odyssey" has now vanished. According to a Facebook post from Utah's Bureau of Land Management on Saturday, the puzzling structure was removed from "public lands by an unknown party."

The Bureau added, "The BLM did not remove the structure which is considered private property. We do not investigate crimes involving private property which are handled by the local sheriff's office. The structure has received international and national attention and we received reports that a person or group removed it on the evening of Nov. 27."

The structure was discovered in the red rocks desert of southwestern Utah by helicopter pilot Bret Hutchings while on a sheep-counting mission. Hutchings told Salt Lake City broadcaster KSL-TV the object appeared to be planted by an anonymous person, with wildlife crew surmising the slab was constructed by an artist or fan of Kubrick's science-fiction landmark. Hutchings quipped, "We were joking around that if one of us suddenly disappears, I guess the rest of us make a run for it…That's been about the strangest thing that I've come across out there in all my years of flying."

Hutchings added, "One of the biologists is the one who spotted it and we just happened to fly directly over the top of it. He was like, 'Whoa, whoa, whoa, turn around, turn around!' And I was like, 'What.' And he's like, 'There's this thing back there — we've got to go look at it!' We were thinking, is this something NASA stuck up there or something? Are they bouncing satellites off it?"

Though Utah originally opted not to disclose the location to avoid attracting inexperienced hikers, the coordinates were eventually discovered, by hiker David Surber, who observed on Instagram that the structure was aluminum, not magnetic, and made of three pieces riveted together, with two rivets missing on the top. See below.

"Apparently the monolith is gone," Surber later said on Instagram. "Nature returned back to her natural state I suppose."

The New York Times reported that some speculated the monolith to be the work of sculptor John McCracken, who died in 2011. According to Patrick McCracken, his father told him in 2002 that "he would like to leave his artwork in remote places to be discovered later."

It's source, and where it lives now, remain a mystery befitting of Kubrick's beguiling sci-fi masterpiece.