Progressives are covering for Tony Blinken and potential Pentagon chief Michèle Flournoy. It's a terrible gamble 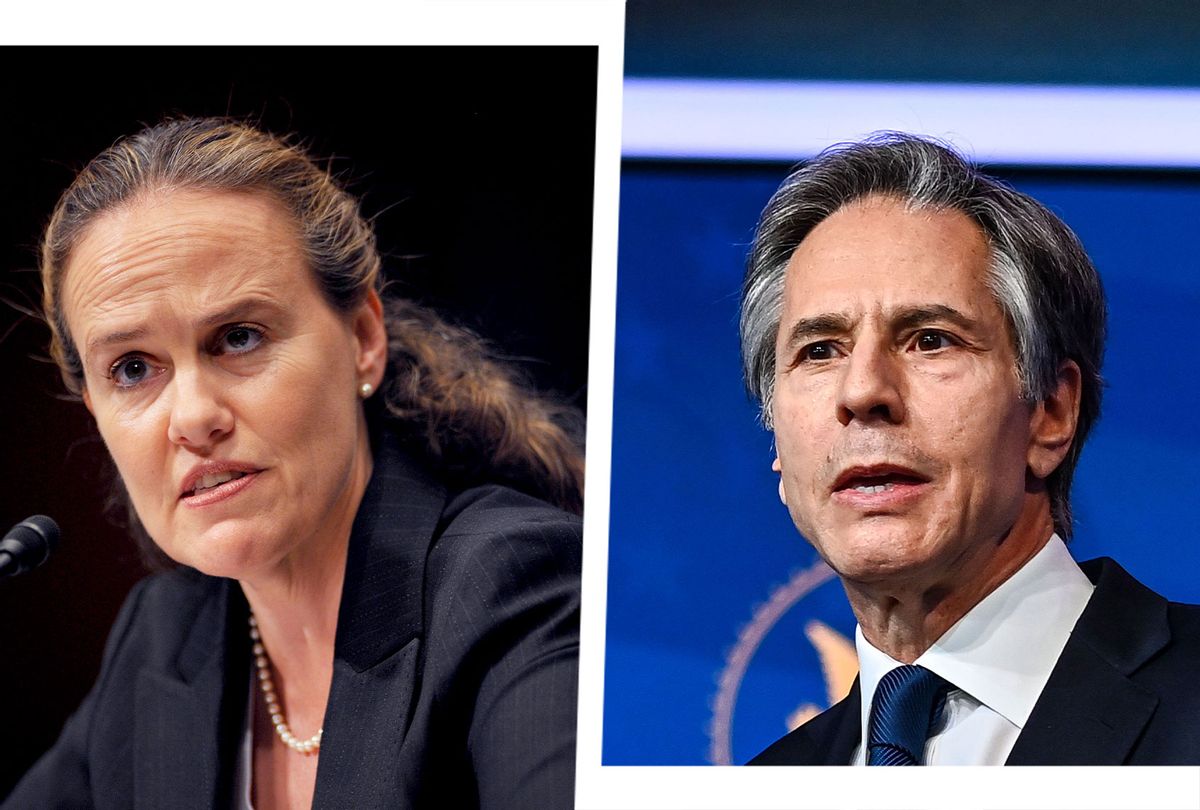 No matter who ends up winning Senate confirmation for top positions on incoming President Joe Biden's "national security" team, an ominous dynamic is already underway. Some foreign policy specialists with progressive reputations are voicing support and evasive praise for prospective Cabinet members — as though spinning through revolving doors to broker lucrative Pentagon contracts is not a conflict of interest, and as though advocating for an aggressive U.S. military posture is fine.

Rationalizations are plentiful, but the results are dangerous. It's an insidious process, helping to set low standards for the incoming administration. Enablers now extol potential Cabinet picks who've combined pushing for continuous war and hugely expensive new weapons systems with getting rich as dealmakers for the military-industrial complex.

Flournoy is grimly notable for urging potentially catastrophic military brinkmanship with China. Like her unabashed pursuit of wealth from the weapons industry, her dangerously aggressive approach toward China is anything but a secret. Yet in her current quest to run the Pentagon, she has received unequivocal support from numerous individuals who are respected in progressive circles, including those with avowed dedication to beating swords into plowshares.

From the top of the influential and well-heeled Ploughshares Fund, Joe Cirincione and Tom Collina have jumped onto the Flournoy bandwagon. Days ago, Cirincione proudly tweeted news coverage of the "Open Letter on Our Support for Michèle Flournoy to Be the Next Secretary of Defense," which he had signed along with Collina and 27 other "nuclear experts."

Cirincione's tweet, touting the pro-Flournoy open letter, ran into pushback from longtime peace activist Marcy Winograd, who tweeted back: "Joe, pls read her essay, 'How to Prevent a War in Asia,' which should be retitled 'How to Start a War in Asia.' Did you know she wants to continue to send 'defensive' weapons to Saudi Arabia while we 'pivot' to SCS [South China Sea] & more war games next to 2 nuclear powers?"

The reply from Cirincione offered little more than wishful thinking about Flournoy. "I disagree with many of the positions she has taken in the past," he wrote. "She is, however, the best qualified candidate for the position; the one most likely to implement serious changes should President Biden order them. Dems have also moved away from the Clinton policies she favored."

While Flournoy still awaits word on whether she'll get the nod from Biden for the Pentagon job, Tony Blinken — the man with whom she co-founded the influence-peddling outfit WestExec Advisors — is already the designated nominee for secretary of state. Oddly, two of Blinken's most high-profile progressive boosters for the job have worked in key roles for Bernie Sanders, a leader second to none in challenging corporate greed.

Faiz Shakir, the campaign manager for Sanders' 2020 presidential campaign, tweeted that the selection of Blinken was a "solid choice." And Sanders' top foreign-policy adviser in his Senate office, Matt Duss, declared: "This is a good choice. Tony has the strong confidence of the president-elect and the knowledge and experience for the important work of rebuilding U.S. diplomacy. It will also be a new and great thing to have a top diplomat who has regularly engaged with progressive grassroots."

That's a common rationale for supporting potential Cabinet members, despite the fact that their records and policy prescriptions are contrary to progressive principles. In effect, we're supposed to be grateful — and mollified — that at least they talk with us.

At the Council for a Livable World — which says that it "promotes policies to reduce and eventually eliminate nuclear weapons and to minimize the risk of war" — the executive director, former Massachusetts congressman John Tierney, told the group's members that Blinken is a good guy: "I, and our organization, have worked with him over the years, and I trust that he can restore and rebuild a State Department badly damaged by the Trump administration."

What does all this praise and access-drooling amount to?

Here's a cogent assessment from Winograd, a tireless antiwar activist: "Progressives may be tempted to trade truth for access to the powerful and privileged, thinking they can influence the course of events if they bite their tongue when Flournoy talks of fighting and prevailing in a war with China. But this sort of thinking is misguided. The power progressives hold must be wielded now before it's too late, before Flournoy is crowned and the U.S. slips further into decline, mired in a high-stakes high-tech arms race — or worse, another endless war, this one with a nuclear-armed nation of over 1.3 billion people."

Disturbing information about Flournoy and Blinken has long been available. And just this weekend, the New York Times published a devastating in-depth news article that shed more light on their direct financial involvements, which amount to classic conflicts of interest.

Many progressive activists and organizations have mobilized since the election to offer well-documented opposition to highly dubious potential members of the Biden Cabinet, including contenders for "national security" posts. Outside the Beltway bubble, grassroots groups are organizing to put up a fight against nominees who have repeatedly pledged and shown their allegiance to the warfare state.

Joe Biden's historic value was to defeat Donald Trump, and progressives played a vital role in that defeat — while often being candid about the many awful parts of the Biden record. Now progressives should emphatically challenge every odious aspect of the Biden administration, every step of the way.