Nat Geo's "Trafficked" delves into the criminal underworld, while putting its reporter at risk

Mariana van Zeller puts her safety on the line for the series, which can feel both intriguing and infuriating 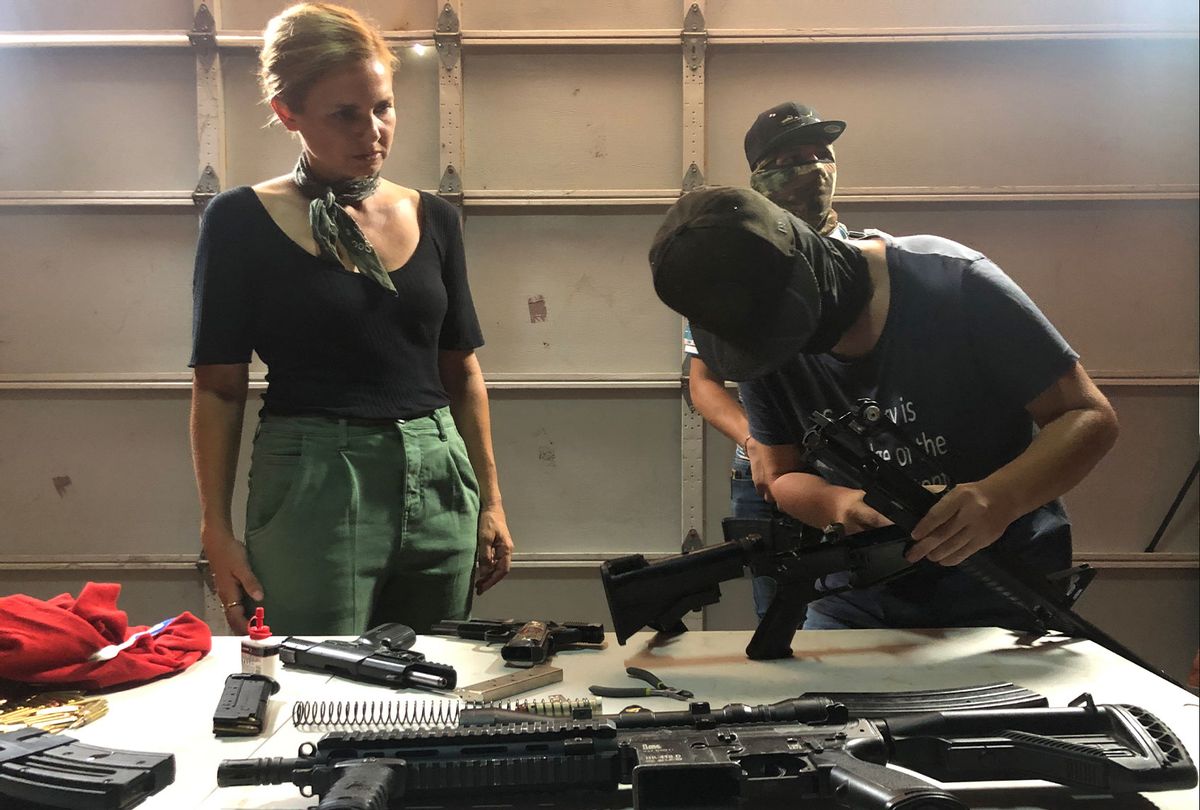 With her new National Geographic series "Trafficked" Mariana van Zeller visibly and tangibly places her life and safety on the line for the sake of transporting viewers to the heart of underground criminal enterprises. That's the hook, and van Zeller makes good on it at every turn. Sometimes seeing her deliver on that promise can be downright unsettling.

In fact, a few scenes show how nearly she comes to real harm in her quest to sit down with dangerous criminals for a one-on-one conversation. All you need to do is scan her face to comprehend what's at stake when, say, a scam artist who has surrounded himself and her with masked men strapped with pistols admits that he considered robbing her and her crew after they met at their agreed upon clandestine meeting.

Then he takes her hands in his and assures her in a patronizing voice that she has nothing to worry about, an act that is in itself utterly chilling.

Over the 15 years that van Zeller has been reporting on the criminal underworld,  she's earned awards and enough of a reputation that her ability to infiltrate multiple aspects of trafficking is never in question. Nevertheless, time and again in "Trafficked with Mariana van Zeller" we see the great lengths to which she must go to get information about illegal industries or gain entry to places most people will never see and most journalists fear to tread. Some of this is for show, certainly; this is still television we're talking about.

Still, by enabling us to accompany her as she cultivates sources and endure long waits in unsafe and unfamiliar places only to be stood up – or worse, to watch her quietly worry when she realizes she's being followed – "Trafficked" c

Van Zeller's determination is admirable, and her methods are daring. The series itself, though, tonally zigs and zags to the point of feeling uneven, and at times van Zeller's efforts at transparency teeter into self-aggrandizement as she touts her career experience and creds, taking us out of the lived experience of the story she's tracking. When "Trafficked" dives into the world of underground crime, it is fascinating. When it makes the reporter's bravery central to the story, it takes on a tabloid newsmagazine feel.

In fairness, some of this can't be helped; most of the people who agree to speak with her do so only on the condition that their identities be hidden or that they aren't filmed at all. Then again, the overwrought score cheapens a number of these scenes, and that layer of the production absolutely should have been tamed.

Still, while van Zeller and her crew head to some truly off-the-map locations, the production largely remains true to its intended path. "Trafficked" explores eight criminal enterprises largely happening in plain sight, including phone scams, fentanyl production, counterfeiting, steroid abuse and prostitution. Her reporting takes her to multiple countries, including Jamaica, Mexico, Israel and Peru, but the common thread is that Americans are likely to have some personal knowledge or interaction with at least one of these crimes if not several. She does her due diligence as a a journalist, certainly, and she also profiles her subjects with empathy, balanced with acknowledging destructiveness of whatever they're engaged in.

The "Scams" episode, for instance, takes us to the other side of the phone line to chat with the people who may randomly call your phone or, more likely, that of an older relative. You're likely familiar with some version of this. Someone calls you or someone you know and claims that millions of dollars are magically waiting for you or them, before soliciting money for a transaction fee to send it to their account.

The reporter sits with the men and women who makes these calls and discusses how they do it, how much money they make from it, and most pertinently, why they do it. The why of the crime is the intriguing and the infuriating part of these episodes, since their crimes destroy innocent lives (a point van Zeller returns to over and over again) while, according to the participants in these networks, also support entire communities.

Whether she's talking to scammers, drug runners or counterfeiters, the common responses to van Zeller's question as to whether they feel remorse are largely along the same lines: the local economy is terrible, straight jobs pay terribly – not to mention, many of them hold legal jobs, but they don't pay a living wage – and this is easy money that supports their parents, their relatives, their children.

If you didn't have better options, what would you do?

Out of the five episodes made available for review, the episodes that mainly take place in the United State are among the least surprising. "Steroids" heads into the illicit industry of steroid abuse in the world of body building, specifically focusing on an influencer who has styled himself as a guru of black market enhancement drugs. Most of its subjects are taking these drugs in plain sight, and to nobody's surprise the main "character" Anthony Hughes, who goes by the stage name Dr. Tony Huge, has no qualms about being filmed as he's injecting people with cocktails of substances. This includes one scene taking place during a break in a bodybuilding competition, when the "doctor" pushes a steroid created for race horses into the flesh of a young man named Zach.

"I'm not going to lie," she says in a voiceover. "I'm completely rooting for Zach to win this competition. But I don't want to see him die in the process." Fair enough.

It shouldn't escape notice that this episode of "Trafficked" mainly follows white people who have the time and resources to devote to injecting crazy substances into their bodies. To Tony Huge, it may even double as advertisement for his services.

The other, "Pimps," is even weaker – although from the way van Zeller describes the process, it also appears to be the most challenging to report out. This episode also takes place in van Zeller's backyard, since she finds most of her sources in Los Angeles. In this hour, all of them are Black.

This episode doesn't tell us much that the average "Dateline" or "Frontline" viewer doesn't already know about the business of illicit sex work. It also makes me wonder why van Zeller chose to solely focus on this aspect of sex trafficking as opposed to international human trafficking, which is only marginally understood by most and still strikes the average American as something happening in places far away from where they live instead of right under their noses.

And yet, like many of van Zeller's other subjects, the pimps she's able to speak with on camera emphatically insist that they're doing a service to the women they exploit.

By and large van Zeller refrains from making the participants in these criminal networks completely sympathetic. Some, as she shows, have zero remorse about what they're doing and the extent to which they hurt and even kill random strangers they victimize.

Others are somewhere in the middle, floating in a space of denial and professed ignorance. There's the biochemist in Mexico cooking black market fentanyl who insists that none of the product he makes has ever killed anyone. There are the phone scammers who reframe their acts of fraud as reparations. Given the miserable wages they make at the Jamaican all-inclusive resorts where some of them work, that they would come to that conclusion is fathomable.

The most fascinating moments are those in which personality barely factors in, whether it's van Zeller's or the mysterious criminals she's meeting. These are the scenes where "Trafficked" is most powerful, a standout example being a sequence where she heads out on a boat and meets up with a group of smugglers in the open waters beyond a Mexican port.

They've just retrieved barrels of liquid that have dropped of the side of a large freighter, and they don't say which. On the next leg another person explains that from there the substance is unloaded from the boat in a matter of seconds and into one of many non-descript vehicles that take it to its next location. Link by link she follows the chain, unwrapping a greater understanding of the ingenuity and toll that goes into creating and distributing this poison. One could almost admire their hustle if it weren't destroying countless lives.

"Trafficked  with Mariana van Zeller" premieres with two back-to-back episodes on Wednesday, Dec. 2 at 8 p.m. on the National Geographic Channel.