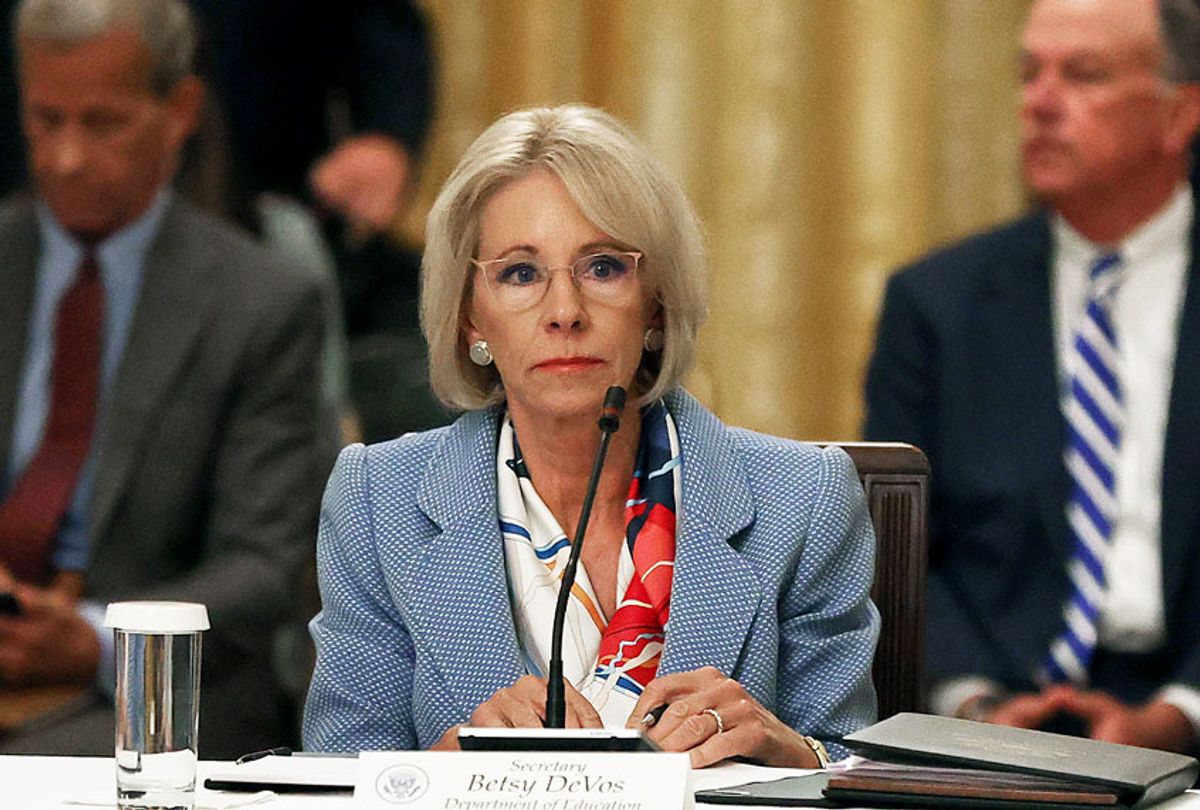 Education Secretary Betsy DeVos attends an event hosted by U.S. President Donald Trump with students, teachers and administrators about how to safely re-open schools during the novel coronavirus pandemic in the East Room at the White House July 07, 2020 in Washington, DC. (Chip Somodevilla/Getty Images)
--

Sen. Bernie Sanders late Tuesday called Betsy DeVos "the worst education secretary in the history of America" and made abundantly clear that he's not mourning her imminent departure after the billionaire school privatization zealot lashed out at popular proposals to cancel student loan debt and make public colleges and universities tuition-free.

"What do you call a billionaire who registered a $40 million, 164-foot yacht in the Cayman Islands to avoid $2.4 million in U.S. taxes, while undermining public schools? The worst education secretary in the history of America," tweeted the Vermont senator, a leading proponent of student debt cancellation and tuition-free higher education. "Bye-bye, Betsy DeVos. You won't be missed."

In a speech at an Education Department financial aid conference on Tuesday, the outgoing education secretary dismissed as "government gift-giving" proposals to forgive crippling student loan debt and eliminate tuition for public colleges and universities.

"We've heard shrill calls to cancel, to forgive, to make it all free. Any innocuous label out there can't obfuscate what it really is: Wrong," said DeVos, who last year proposed handing the federal government's $1.6 trillion student loan portfolio over to a "stand-alone government corporation." Critics slammed the proposal as an attempt to prevent the next president from canceling any of the debt.

President-elect Joe Biden has vowed to forgive a portion of the student debt held by tens of millions of Americans and make public colleges and universities tuition-free for families with incomes below $125,000 a year. The former vice president has not yet announced his pick to succeed DeVos.

In response to DeVos' remarks Tuesday, Sen. Elizabeth Warren, D-Mass., — one of many lawmakers and activists pressuring Biden to use his authority to cancel student loan debt — tweeted sardonically, "Because we were all just dying to know what the unqualified billionaire who made this problem worse thinks about helping people."