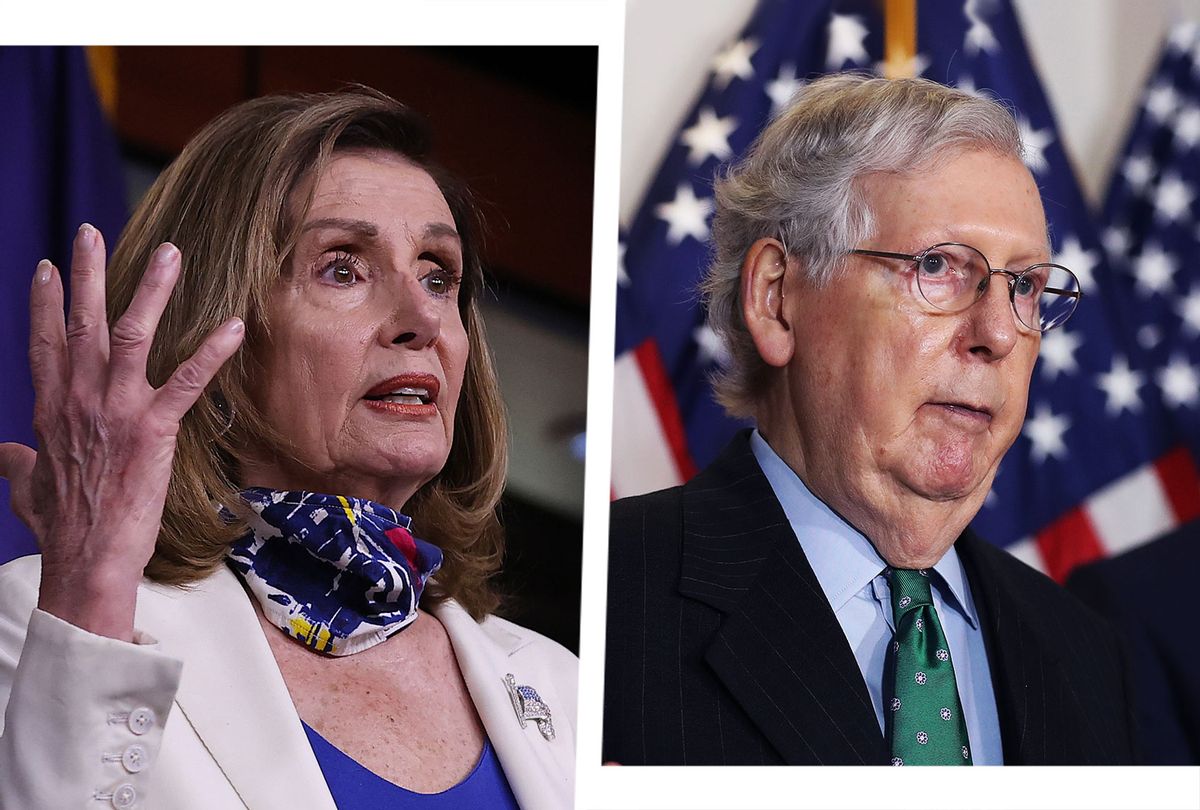 Devoid of any "silver linings", the fresh jobs numbers further undercut the Kentucky Republican's argument just last month that the economy is trending in the right direction and therefore requires less stimulus to drag it out of recessionary territory. According to Friday's report, the U.S. added just 245,000 jobs in November, down from 610,000 in October and the fifth consecutive month hiring has slowed.

Elise Gould, senior economist at the Economic Policy Institute, warned that with key federal unemployment programs set to expire at the end of December and coronavirus infections on the rise nationwide, "millions of workers and their families are in for an even harsher winter" unless Congress takes decisive action.

"The unemployment rate edged down to 6.7%, but for the 'wrong' reasons as 400,000 people left the labor force," Gould noted in an analysis of the new figures. "The number of workers unemployed 27 weeks or more—the long-term unemployed—shot up to 3.9 million in November. Now, over one-third (36.9%) of the total unemployed are long-term unemployed."

The alarming numbers came at the tail end of week in which coronavirus relief talks, previously stagnant for weeks, appeared to progress slightly, with Democratic congressional leaders and President-elect Joe Biden throwing their support behind a $908 billion bipartisan stimulus framework despite its serious inadequacies.

"We'll take the time we need and we must get it done," House Speaker Nancy Pelosi (D-Calif.) told reporters Friday, voicing optimism that lawmakers can strike a deal on a relief package before both chambers depart for Christmas recess. "We cannot leave without it."

In a tweet Friday, Senate Minority Leader Chuck Schumer (D-N.Y.) said that "this latest jobs report shows the need for strong, urgent emergency relief is more important than ever."

"Senator McConnell must hear the pleas of the millions of struggling American families," Schumer added.

McConnell has not backed the bipartisan plan, circulating his own proposal earlier this week that would gift corporations sweeping immunity from coronavirus-related lawsuits while providing no boost to weekly unemployment benefits, direct stimulus payments, or aid to state and local government.

The bipartisan framework also includes a liability shield, but one far more limited than McConnell's.

"Senior Democrats have balked at that measure [in the bipartisan plan] despite embracing the broader bill," the Washington Post's Jeff Stein reported Thursday. "A number of Republicans have made clear that no stimulus package will pass without including the measure."

McConnell's proposal was so paltry and stuffed with poison pills, including a 100% tax deduction for business meals, that critics warned the Republican leader is intentionally trying to keep the economy mired in recession to sabotage the incoming Biden administration.

"Mitch McConnell is apparently ready to ruin the holidays and the economy for working families and small businesses unless he gets his way," Jeremy Funk, spokesperson for government watchdog group Accountable.US, said in statement Friday. "His plan to shower corporations, millionaires, and CEOs with more handouts while giving virtually nothing to struggling workers and their families is beyond unacceptable."

Sen. Ron Wyden (D-Ore.) tweeted Friday that "Congress knows how to help workers and families. It knows how to prevent the looming recession."

"One person is standing in the way," Wyden said. "Mitch McConnell's political games are costing lives and livelihoods."

With November's meager hiring in the books, the U.S. economy currently has 9.8 million fewer jobs than in February, when the coronavirus began spreading rapidly across the United States. Now, as coronavirus infections, hospitalizations, and deaths are soaring to new heights, Rep. Don Beyer (D-Va.) warned Friday that "we are heading into a situation that may be even worse than the spring."

"Christmas is in three weeks, rent was due a few days ago, and millions of Americans are on the verge of hunger and homelessness," said Beyer. "However, instead of passing a relief bill that the Federal Reserve Chair and economists say is sorely needed, Senate Republicans have been confirming judge after judge—filling the federal bench while Americans fill hospitals across the country."

"The leader of their party has been doing even less than they have—sulking and seeking revenge for an election he lost definitively, while Americans pay with their lives and livelihoods," Beyer continued. "Workers and their families, as well as businesses and state and local governments, need relief now—especially as many federal relief programs are set to expire at the end of the year."