California’s new goal is to COVID-test hospital workers. But will the state’s health care behemoths follow through? 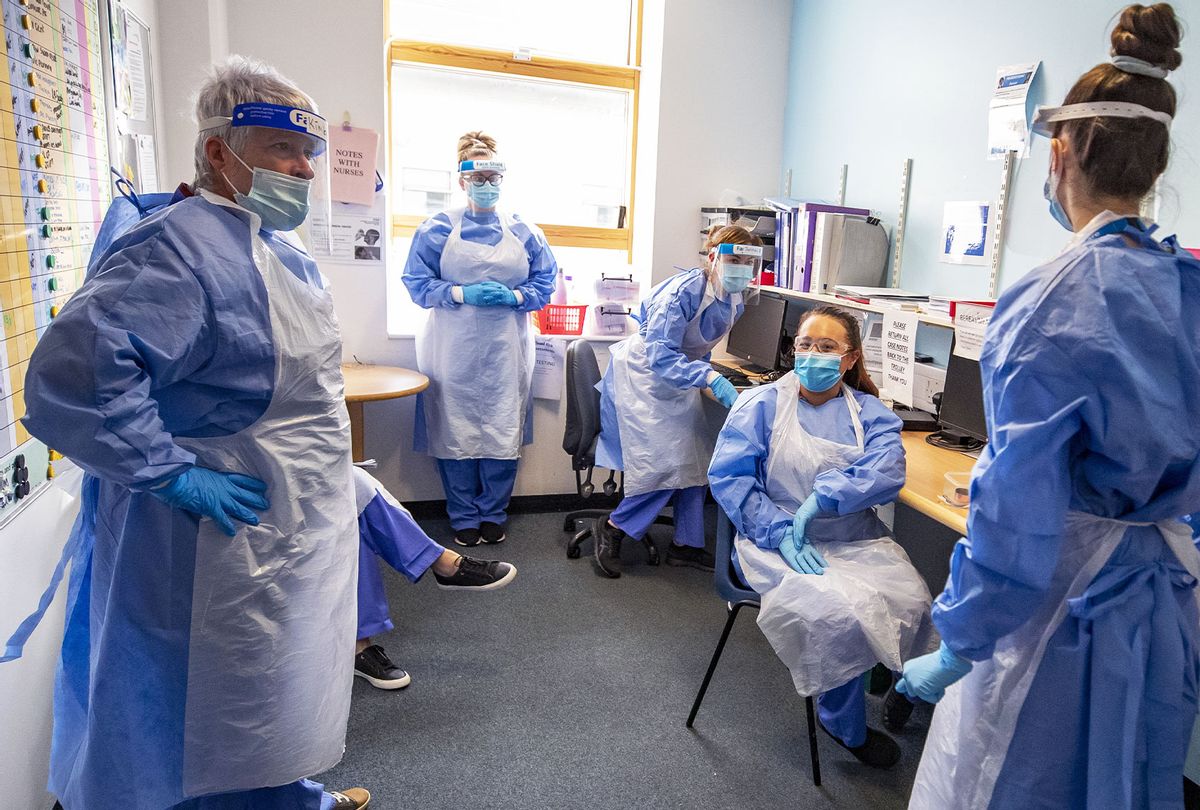 Nurses hold a meeting on one of five Covid-19 wards at Whiston Hospital in Merseyside where patients are taken to recover from the virus. (Peter Byrne/PA Images via Getty Images)
--

For months, health care professionals and union members up and down California pleaded with officials to mandate something that sounds so automatic, it should have been in place long ago: regular COVID-19 testing for hospital workers. For months, they received no response.

Now, finally, the California Department of Public Health (CDPH) has acted, with a Thanksgiving week announcement aimed at implementing such testing. But will its nonbinding recommendations really prompt the state's health care behemoths to follow through?

When the story of the pandemic in 2020 is fully told, one of the chapters that will leave readers shaking their heads is the industry's baffling inaction when it came to taking care of its own. Since February and March, hospital workers have been constantly exposed to patients who were either symptomatic or already diagnosed as being infected with the novel coronavirus — yet testing of those workers has been haphazard, erratic and nonuniform throughout California.

"One, it costs too much money. Two, it reveals consequences that are adverse for the bottom line — increased staffing levels, employees being quarantined," said Sal Rosselli, president of the National Union of Healthcare Workers, in an interview with Capital & Main in August. By then, Rosselli had already been grinding for months to get a statewide testing system in place for hospital workers modeled after the one Gov. Gavin Newsom had established for the nursing home industry. (Disclosure: The union is a financial supporter of Capital & Main.)

Stories abounded all summer of employees who couldn't get tested for COVID-19 at their own hospitals, despite their having been exposed to the virus and displaying symptoms suggesting they had become infected there. They had to find testing on their own instead, often at their own cost. Nurses and their unions filed lawsuits in California and elsewhere, claiming their employers were failing to protect them with such basics as fresh supplies of N95 masks because doing so was cutting into profits.

Walkouts and protests became common, and they continued well into November — unsurprising, considering the hospitals' and the state's utter lack of response to nurses' safety concerns. The nurses have used their platform to draw attention to what they see as dangerously low staffing levels and the lack of access to testing.

What the new state guidelines mean, then, is enormously significant — in theory. In announcing the guidelines in a letter on Nov. 25, the CDPH said it was incorporating testing strategies informed by the Centers for Disease Control and Prevention (CDC). A link accompanying the letter did indeed lead to the CDC's recommendations for testing. They have been in place since early July.

The CDPH's guidelines recommend that general acute-care hospitals institute weekly COVID-19 testing for all health care workers, by Dec. 14. Critically, the department also recommends that every admitted patient be tested, starting immediately. There has been no such requirement for hospitals to test incoming patients, something advocates for physicians and nurses have pointed out for months.

"This is an amazing and welcome move," said Zenei Triunfo-Cortez, an RN from the Bay Area and a president of both the California Nurses Association and its national parent organization, in a statement released by the union. (Disclosure: CNA is a financial supporter of this website.)

"We applaud California for being a leader in requiring this type of testing program … There are simply too many asymptomatic people with COVID, and without robust testing our hospitals will remain centers for spreading the disease, instead of centers of healing."

Left unclear is how closely the hospital chains will follow CDPH guidance. Considering their reluctance all year to put in place testing programs for workers and patients that, while sensible medically, cost money, it's fair to wonder whether the large, corporate-owned facilities will fall in line right away or take their time implementing the changes.

Certainly, there are forms to be filled out. Accompanying the CDPH letter was one such piece of homework, called the COVID-19 Mitigation Testing Plan, which acute-care hospitals were told to complete and submit to their local licensing district offices no later than Dec. 7. Again, however, it's not clear what happens if a hospital simply blows past that deadline.

And in the larger picture, the CDPH's Thanksgiving week missive is so long overdue that it's difficult not to wonder how many hospital employees have had their own health needlessly put at risk through the long summer and fall. It's worth repeating: The CDC recommended months ago that health care workers be tested regularly if they were even suspected to have been exposed to the virus.

In September, we told you the story of Mailinh Nguyen, a certified nursing assistant at Fountain Valley Regional Hospital near Huntington Beach, who learned after the fact that she'd been caring for a COVID-positive patient while wearing nothing more protective than a standard surgical mask. It was the perfect storm of mistakes: The hospital did not test incoming patients for the virus; it had no testing plan for its own workers; and when Nguyen informed her managers of the patient's positive test, she says she was told to continue working while monitoring herself for symptoms.

"It would be great if all hospitals — not just ours, but all of them — would test all patients when they arrive," Nguyen said at the time. "That's one way to take care of the people who are caring for the patients."

In the coming weeks, California's nurses and physicians will learn whether the new state recommendations augur a change for the healthy when it comes to those who remain on the front lines of the pandemic.