With curfews and closures, restaurants have reopened their playbooks from the spring for outdoor dining and takeout 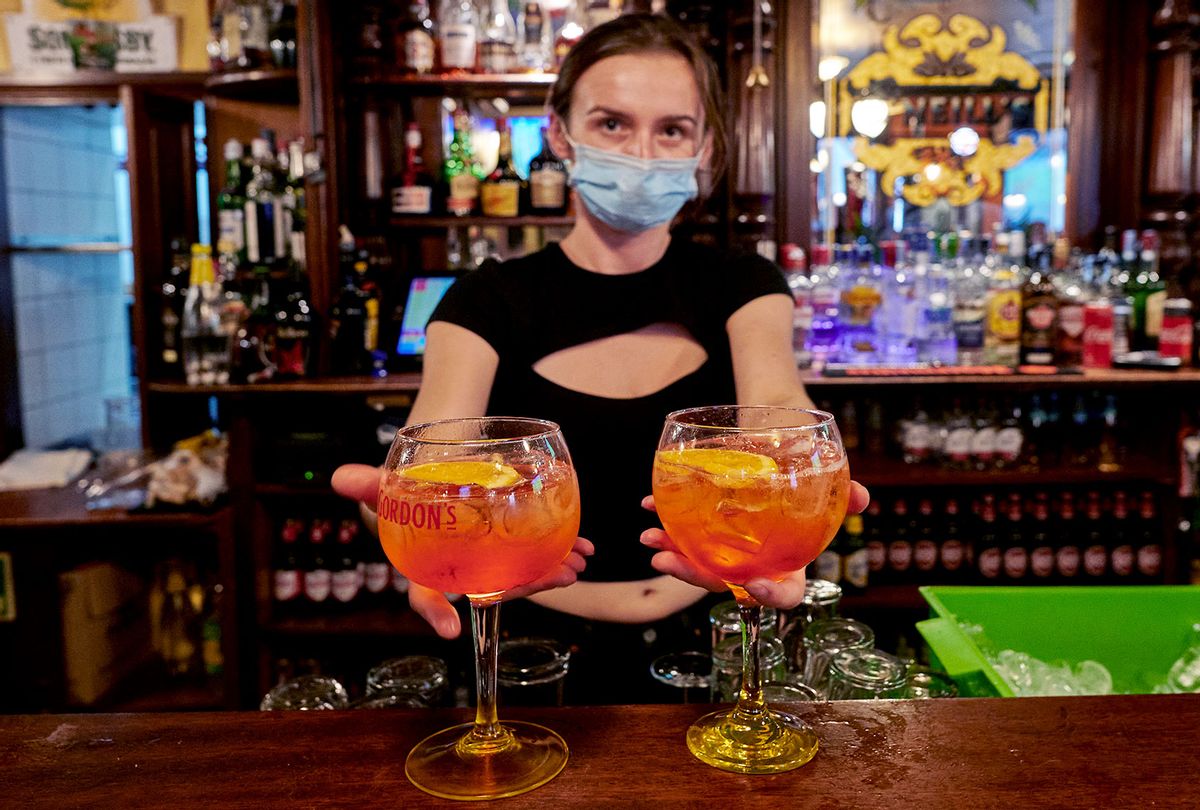 As states and cities around the country enact curfews on bars and restaurants to limit the spread of COVID-19, many different calls are being made on "last call."

In Massachusetts, eateries must stop serving at 9:30 p.m. New York, Ohio and an increasing number of states are setting 10 p.m. closing times for indoor dining, while in Oklahoma, bars and restaurants can keep the rounds going until the wee hour of 11 p.m. In Virginia, alcohol has to be off the tables at 10 p.m., but restaurants can stay open until midnight.

With coronavirus outbreaks being traced back to bars and restaurants, curfews are being embraced not just by governors but also by many restaurant and bar owners who see them as a more appetizing alternative to the total cessation of indoor dining.

"I do think things need to be a little bit tightened down," said David Lopez, general manager of Manny's Restaurant in Kansas City, Missouri, and incoming president of the city's restaurant association. Mayor Quinton Lucas ordered a 10 p.m. curfew that took effect Friday.

"When you close at 10 p.m., you're taking away a good portion of that time when people are standing with no mask on," Lopez said. "Each hour that goes by and you're standing in the same space, you make yourself more susceptible to contracting the virus."

Along with anecdotal reports that as the evenings wear on, an older set of rule-abiding diners are replaced by younger, more defiant — and often more intoxicated — patrons, there has been some empirical evidence to justify the curfews. In Minnesota, public health authorities found that among people who tested positive for COVID-19 and had visited a restaurant, those who visited after 9 p.m. were twice as likely to be part of an outbreak cluster.

To some epidemiologists, establishing cutoff times ignores the fact that the coronavirus does not obey curfews. But they endorse any tool that helps slow the spread.

"It's a half measure and maybe less than a half measure, but that's better than no measure at all," said Raymond Niaura, interim chair of the epidemiology department at the New York University School of Global Health.

From June 1 to Nov. 16, 190 outbreaks in Minnesota — involving 3,201 infected people — were traced back to restaurants and bars by public health authorities. That represented 46% of the outbreaks in public settings. Weddings came in second, with 107 outbreaks (14%), followed by sports (11%), gyms (11%), social gatherings (9%), churches (4%) and funerals (3%). In all, there were 4,145 unique cases from all these kinds of gatherings out of the 250,000 infections Minnesota has catalogued since the start of the pandemic.

The benefit of curfews may come not primarily from targeting the late-night revelers but by curtailing the number of patrons at restaurants and bars. "Their effect is to reduce the amount of time that will allow people to congregate," said Stephen Kissler, a research fellow at the Harvard T.H. Chan School of Public Health.

In an interview with KHN, Dr. Anthony Fauci, director of the National Institute of Allergy and Infectious Diseases, expressed broad concern about inside dining given the aggressive COVID-19 spread. Fauci did not make any distinctions in the time of day.

"If we're in the hot zone the way we are now, where there's so many infections around, I would feel quite uncomfortable even being in a restaurant, particularly if it was at full capacity," he said.

For those people who do go to bars and restaurants, curfews provide some added protection, Fauci said. "If you look at what happens as you get into the evening, people have a few drinks, they get a little bit more loose, they start taking masks off if they have masks on, they let down their guard," he said.

The curfews and closures are frustrating to many restaurateurs and tavern owners who struggled through a round of shutdowns in the spring and have been enforcing mask and distancing rules and aggressively disinfecting their tables and bathrooms.

"We had no outbreaks in the time we've been open," said Sean Kenyon, who owns three restaurants and bars in Denver. "We knew there would be a second wave, but we thought society would be more well equipped and well informed to deal with it."

Kenyon said late-night bargoers are a problem only for establishments that don't strictly enforce their rules, which he added takes effort given the blowback from patrons who don't want to wear masks when they enter. When he has worked the door checking IDs, he said, "the vitriol we've had spewed at us for the past six months has been unbelievable."

Restaurateurs argue that infections passed along through their establishments are eclipsed in number by transmissions taking place in gathering places. "In Minnesota, it is a small percentage coming from restaurants and bars if you look at the contact tracing," said David Benowitz, chief operating officer at Craft & Crew, which has five locations in and around the Twin Cities.

Curfews are not the province of just the United States. In Canada, Saskatchewan restaurants and nightclubs were ordered to stop serving liquor at 10 p.m. as of Nov. 16. Italy ordered restaurants in regions with the heaviest coronavirus outbreaks to close at 6 p.m.

Troy Reding, who owns three restaurants in Minnesota, said merely the announcement of a curfew, made by the governor earlier in the month, put a damper on the number of customers coming to his restaurant at any hour. "When the curfew was announced, sales plummeted," he said. "It became very real to them that going out and dining wasn't the safest thing to do."

In a reflection of how leaders are struggling to keep up with the coronavirus running amok, even before Minnesota's restaurant and bar curfew could kick in, it was superseded by a complete ban on indoor dining and drinking at those establishments.

With curfews and closures, restaurants have reopened their playbooks from the spring for outdoor dining and takeout. Nonetheless, they will take an economic hit. Benowitz said he must furlough 140 people from his 200-person workforce.

"We're constantly pivoting," Benowitz said. "If you're not able to change in this environment on a dime, then you're not going to be able to succeed."