Will Ivanka snitch on her father?

As Trump’s plot to subvert the election fails, this story is just beginning 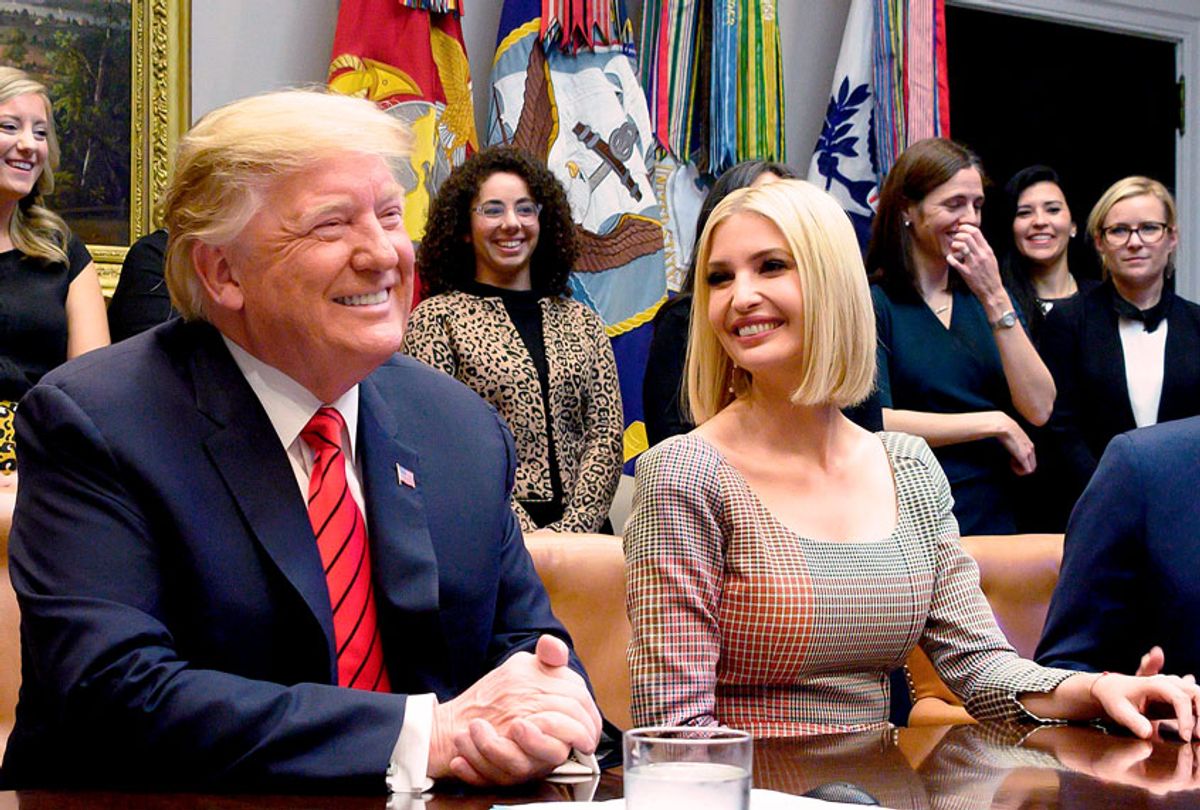 If you're a fan of TV crime procedurals, you've no doubt seen shows where detectives interrogate two suspects detained in separate and austere holding rooms. The object is to get one of the perps to snitch on his accomplice and "turn state's evidence" in return for leniency.

The dramas may feature different actors and different crimes, but the essential script components are the same: The cops offer immunity, witness protection or some other kind of favorable treatment in exchange for a confession. The arrestees, however, remain defiant, and hang tough. Some sit stone-faced and silent. Others smirk and laugh. Still others hurl back insults, accusing the cops of incompetence and a rush to judgment.

Then, slowly, just before a big commercial break, the fear of doing hard time sets in. One of the suspects reconsiders the possibility that his confederate will cash in on the promise of a deal, leaving him alone to take the rap. The perp's rough exterior cracks. Before you can say "case closed," Miranda rights are waived, and the truth emerges.

In real life, the drill rarely concludes as quickly. And while some suspects invoke the Fifth Amendment and never agree to talk, others do. Just ask Rick Gates why he decided to testify against his former business partner Paul Manafort. Faced with the prospect of a lengthy prison term, Gates opted to save his own skin.

As Donald Trump's desperate plot to subvert the election fails and the end of his presidency approaches, Ivanka Trump could face her own "state's evidence" moment as a result of her role in her father's sketchy business enterprises in New York.

According to the New York Times, both state attorney general Letitia James and Manhattan district attorney Cyrus Vance Jr. are investigating income-tax-avoidance schemes undertaken by the Trump Organization that involve questionable deductions claimed for "consulting fees" paid to Ivanka and other individuals and businesses.

Vance's investigation is criminal in nature, while James' inquiry is civil. The probes, per the New York Times, are being conducted independently, but they overlap. New subpoenas have been issued in each, seeking information about the consulting payments.

The subpoenas come on the heels of a blockbuster story published by the New York Times in late September that revealed Trump paid a mere $750 in federal income taxes the year he won the presidency, and that he paid no income taxes in 10 of the 15 years prior to that.

Documents obtained by the New York Times also indicate that between 2010 and 2018, Trump wrote off "$26 million in unexplained 'consulting fees'" as business expenses on his tax returns. The $26 million included $747,622 paid to an unidentified individual. That amount, it turns out, exactly matches income Ivanka listed as consulting fees on the 2017 financial disclosure forms she filed when she joined the White House staff.

As former New York City prosecutor Elura Nanos wrote in a recent column for the Law & Crime website, "This could be a problem, as Ms. Trump was an executive officer both of the company making the payment and the company doing the consulting. When a key person is on both sides of such a transaction, tax deductions could be illegal if the payments were inflated."

"I used to do Mafia cases. This is exactly what they would do. If they wanted to take money out of a company and put it in the pocket of an individual, they would say, 'We'll just call it a consulting fee.' That does not make it okay on its own. The question… is did Ivanka Trump actually give consulting services worth $747,000? I mean, think about that."

Ivanka reacted to news of the consulting-fee subpoenas in true Trump fashion, rage-tweeting:

"This is harassment pure and simple. This 'inquiry' by NYC democrats is 100% motivated by politics, publicity and rage. They know very well that there's nothing here and that there was no tax benefit whatsoever. These politicians are simply ruthless."

It's rarely a good idea, whether on television or in the actual world, for a potential suspect to directly attack the investigators. The better course is to let your lawyers do the talking.

Ivanka, of all people, should know this. In 2012, she and Donald Trump Jr. reportedly avoided a felony fraud indictment for misleading prospective buyers of units in the Trump SoHo, a hotel and condo development in lower Manhattan. The siblings narrowly escaped prosecution, but only after high-powered attorney Marc Kasowitz, a longtime Trump family consigliere and a Vance campaign donor, allegedly leaned on the DA behind the scenes to drop the case.

Trump cannot be pardoned for state crimes, and absent a federal pardon, once he leaves office, he will lose the immunity he now enjoys as a sitting president from prosecution for any federal offenses he may have committed. And while Trump's attorneys currently are back before the Supreme Court, asking the panel to narrow the scope of Vance's subpoenas, that effort would appear similarly doomed once Trump departs the White House.

What this means for Ivanka remains to be seen. She has not yet been formally accused of committing a crime, or officially been named as a target of any investigation. Moreover, even if she is eventually indicted, everyone—even a Trump—is presumed innocent until proven guilty beyond a reasonable doubt.

Still, as the clock ticks down on the Trump presidency, the first daughter may well be advised to ponder whether her legal interests and those of her father have diverged to the point where it would be better to cooperate with the authorities, fess up, and ultimately turn state's evidence.