These climate bills could get past Mitch McConnell, two senators say

These "stealth climate bills" could make a significant dent in emissions 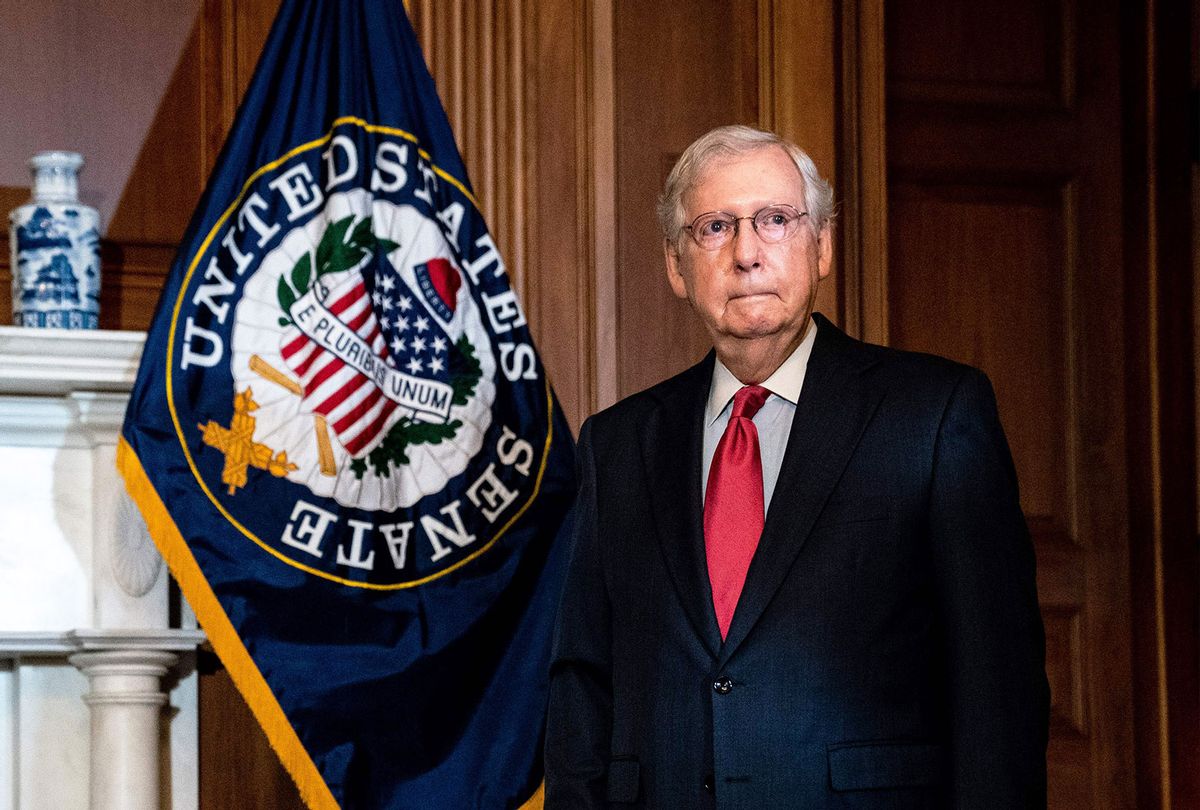 Americans won't be getting a Green New Deal as a late Christmas present, or even a carbon tax. Barring a Democratic sweep of a Senate runoff election in Georgia, Republicans will hold on to the Senate, effectively eliminating the odds of large-scale climate legislation passing anytime soon.

The last time Senator Mitch McConnell led Republican senators under a Democratic president, he rebuffed President Barack Obama's attempts at bipartisan cooperation and stuck to a strategy of blocking any bill that Democrats wanted during Obama's two terms. That's why many climate advocates have focused their attention on what President-elect Joe Biden could do without the help of Congress.

But there's lower-profile legislation in the works that McConnell has no incentive to block — efforts to clean up oceans, boost clean power, and support carbon-capture technology. Senators have already introduced half a dozen bipartisan climate bills, most of which are sitting in committee, and a couple are on the calendar to get their hearing on the Senate floor. None of these bills, to be sure, is revolutionary: You probably won't hear progressives trumpeting this environmental legislation on Twitter, or conservatives on Fox News warning that it will lead us to destruction. But the fact that these bills aren't swept up in the culture wars means that they have a strong shot at passing after a new Congress convenes next month. And they could make a significant dent in emissions. Call them stealth climate bills.

For decades, Democratic Senator Debbie Stabenow of Michigan thought that farmers and foresters would benefit by embracing climate action. When farmers capture carbon dioxide, it makes their soil richer. And she thought timber growers might embrace a carbon price since it would pay them for something they already do: Turn atmospheric carbon into wood. But for the most part, these people weren't interested — until recently.

"I tried for years to get the attention of people in agriculture and forestry," she said. "Now I'm having wonderful conversations with farmers in Michigan who are interested not only in carbon markets and carbon sequestration, but also putting up solar panels on excess land, and integrating wind power."

Stabenow has witnessed a similar shift in the Senate. Over the years she snuck little seeds of climate action into the Farm Bill when it came up every five years, funding carbon-farming demonstration projects and reforms to allow farmers to grow soil-protecting cover crops. But she had to scrupulously avoid mentioning the two words that were to Republicans what sunlight is to vampires: "Because if we had said the words 'climate change' we would not have been able to get bipartisan support," Stabenow explained.

Republicans are no longer so skittish, she said. Stabenow is working with Republican Senators Deb Fischer of Nebraska, John Thune of South Dakota, Mike Braun of Indiana, and Lindsay Graham of South Carolina, variously, on a trio of bills aimed at bringing carbon markets to farming and forestry. The most important of these three bills, The Growing Climate Solutions Act, would tell the Department of Agriculture to figure out which practices reliably remove carbon from the atmosphere, then set up a market allowing growers to make money for doing those things. There's no longer a need for subterfuge: Republicans have begun putting their names on a bill explicitly aimed at climate change.

"The folks who used to come to the floor and rail about Chinese hoaxes and fake science — all that has been shut up," said Senator Sheldon Whitehouse, a Democrat from Rhode Island. "We are just not hearing any of that nonsense any longer."

Whitehouse has searched high and low for ways to make climate action bipartisan. He has his name on The Growing Climate Solutions Act and has Republican allies working with him on another five bills. One would help manufacturers squelch greenhouse gas emissions, another would create a federal program to get carbon dioxide out of the air, a third would pay nuclear power plants for producing carbon-free electricity to keep cheap gas plants from crowding them out of the market, and the fourth would protect and expand the best carbon-capturing ecosystems on the planet: mangrove forests, kelp beds, and sea-grass marshes. Finally, there's a bill with eight Republican co-sponsors that would help anyone capturing greenhouse gas use to use their carbon dioxide to build new stuff.

When it comes down to a final vote, these bills will need more than just a handful of climate-curious Republican senators to pass. But that should be no problem, Whitehouse said. He's already succeeded in getting four other low-profile climate bills passed into law under President Donald Trump. Most people haven't heard of these — they really are stealth bills. One created a tax credit for carbon capture, another set up an initiative to support the next generation of nuclear power plants, and another instructed the Nuclear Regulatory Commission to "get off its butt and set up a separate path for next generation technologies," Whitehouse said. "I used to describe the problem as trying to get a Tesla through a carburetor inspection." The fourth set up a research program for the U.S. Navy to start making fuel from captured carbon.

All of these efforts passed with not only Republican support but also with near-unanimous votes in both the House and Senate in 2018.

Both Whitehouse and Stabenow acknowledge that these smaller bills, while helpful in the fight against climate change, aren't enough. What they would really like to do is put a price on carbon, either through a tax or some kind of carbon market. And most Republicans still oppose making fossil fuel companies pay for their pollution.

"I think of it a little as trench warfare," Whitehouse said. "As trenches become increasingly indefensible or preposterous to defend, Republicans fall back to a more acceptable trench. They have fallen back in several stages now, and it's left a fair amount of room in the parts of the field they have abandoned. But they are still hanging on pretty hard. It's not like the battle is over, they are just defending a much smaller trenchline."

To activists, These bipartisan bills may look like a limp consolation prize. Still, sometimes stealth policy can make a big difference, said Ted Nordhaus, director of the environmental think tank, The Breakthrough Institute. He points out that, despite Trump's best efforts, greenhouse gas emissions continued falling over the last four years at about the same rate that they had fallen under Obama's administration.

"That was driven by 30 years of federal policy that no one paid attention to," Nordhaus said. Research on fracking and super-efficient gas turbines made natural gas cheap and helped put coal companies out of business. Research that led to the development of LED light bulbs slashed electricity demand. And the tax credits that helped make wind and solar power affordable led to a renewable energy boom.

"All that is due to policies that were pretty damn uncontroversial," Nordhaus said. "In my view, the quiet climate policy will prove much more effective over the long run. You just muddle through: It's never the grand gesture, never the sweeping change people imagine."