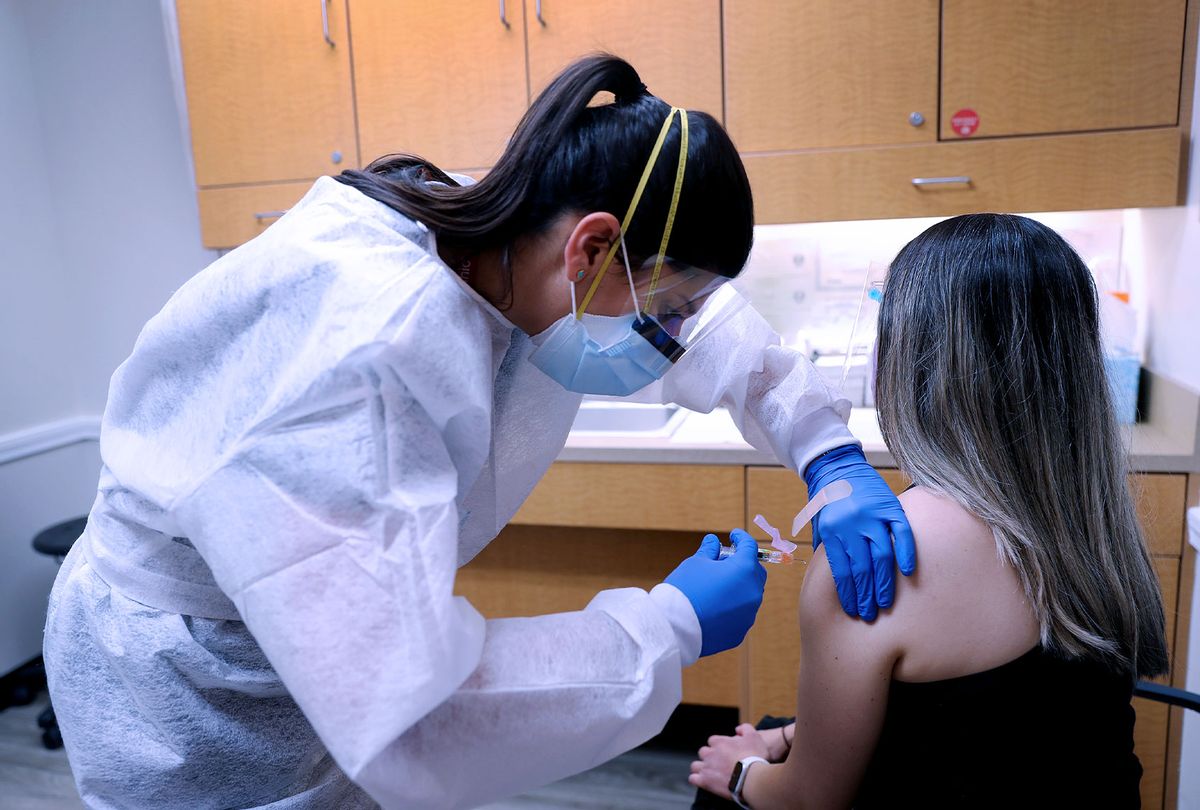 A new report reveals that scientists may have taken the first crucial steps toward developing a vaccine that will treat not specific strains of influenza, but all of them. The finding could change the way that the flu vaccine is doled out — meaning that, instead of being vaccinated for a specific strain of flu every year as humans currently are, one single shot could vaccinate us against any and all strains in perpetuity.

The new study, which was first published in the scientific journal Nature Medicine on Monday, describes a universal flu vaccine candidate that could change the way we vaccinate ourselves against influenza. The theoretical vaccine takes advantage of the properties of the influenza virus, which, as the article explains, resembles a lollipop, with a head and a stalk. The "candy" part of the virus, the head, is covered in proteins known as hemagglutinins (HAs).

Existing influenza viruses target specific HAs by injecting weakened or inactivated version of the influenza virus directly into the body, which can then recognize the antigens — that is, the molecule or molecular structure found on a disease-causing organism (or pathogen) — and develop an appropriate immune system response.

The challenge in fighting the viruses this way, though, is that the influenza virus can quickly mutate and swap genes between strains, making it possible for people who have developed immunity to one strain of the virus (whether naturally or through vaccines) to be vulnerable to an evolved version. This is why new vaccines are repeatedly developed and given out, so that our bodies can keep up with the latest influenza evolutions.

"Influenza virus infections are a substantial public health concern," the authors of the paper explain. "Seasonal influenza causes between 290,000 and 650,000 deaths every year globally, according to the World Health Organization. In addition, influenza pandemics occur at irregular intervals and can claim millions of lives. The most devastating example is the H1N1 pandemic of 1918, which caused 40 million deaths according to conservative estimates. Current seasonal influenza virus vaccines contain three or four strains of influenza virus that cover the viruses circulating in the human population."

The new vaccine candidate, which was developed by virologist Florian Krammer of the Icahn School of Medicine at Mount Sinai and her colleagues, attempts to circumvent this problem by developing a vaccine that kills the virus by targeting it stalk rather than by aiming for the head. The previous challenge to doing this is that the human body has grown accustomed to attack influenza strains through the head and can override efforts to produce antibodies intended to target the stalk. Krammer and her colleagues have attempted to solve this problem by creating a strain of the virus that uses the influenza stalk but creates a completely new head. Because the so-called chimeric HAs (cHA) do not trigger immune memory, the body does not create as many antibodies targeting the head and instead focuses more on the stalk, which it does recognize.

As researchers rush towards production of a novel coronavirus vaccine, it has been a banner year for biomedical research, with all kinds of advance in the field of immunology and microbiology. Last week, in a paper published by the scientific journal Nature Communications, scientists announced  that they had used CRISPR – a genetic technology that can alter DNA — to successfully edit SIV (simian immunodeficiency virus), a virus similar to HIV, out of the genomes of rhesus macaque monkeys' cells, potentially laying the groundwork for similar biotechnology to help people defeat HIV. Meanwhile, some of the most promising vaccine candidates for the novel coronavirus, which are being distributed shortly, rely upon an entirely new vaccine technology, known as synthetic mRNA, that has never been mass-produced until now. Indeed, last month, multiple biotechnology companies, including Moderna and Pfizer (which worked with BioNTech), developed promising coronavirus vaccine candidates that made it past Phase III, or the part of a clinical trial where a smaller group of patients is expanded and made more diverse so that a vaccine can be tested for efficacy and safety.

By contrast, the influenza study was only a Phase I experiment, one in which 51 people received a variety of vaccines and 15 people were given placebos. The small size of the study is further underscored by the sheer number of influenza strains that exist, with three to four strains being known as group A and other influenza virus strains being known as group B. According to Krammer, if their technology is successful, it will take years before there are enough cHAs from both groups to turned into a universal influenza vaccine.