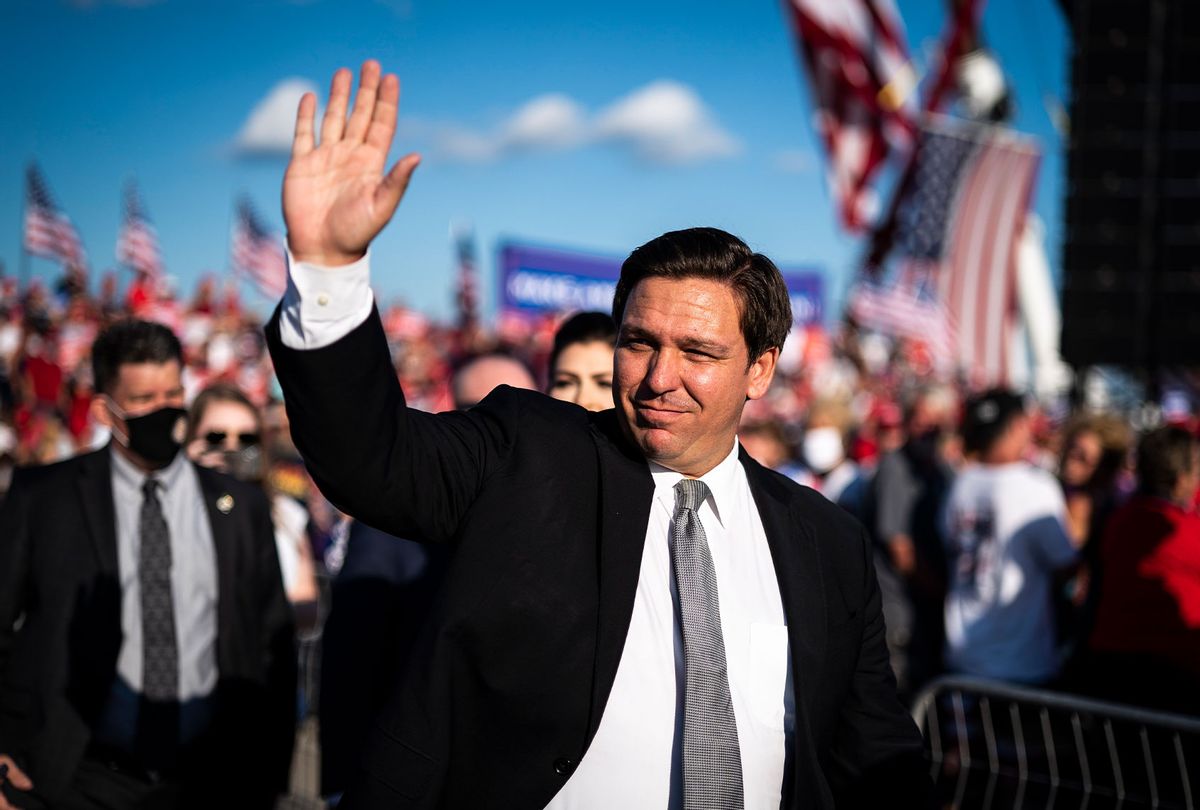 A Florida data scientist who accused the state of manipulating coronavirus data at the onset of the pandemic just had her home raided by state police and is now alleging that Gov. Ron DeSantis was behind it.

Rebekah Jones helped build the state's coronavirus dashboard before she was fired by the Florida Department of Health in May after she says she refused to make certain changes to the data. On Monday, she released a video of armed officers raiding her home.

"They pointed a gun in my face," Jones said in a tweet with a video of an officer pointing a gun up a staircase as she told him her two children were upstairs. "They pointed guns at my kids."

According to a copy of the affidavit that the Florida Department of Law Enforcement said it used to obtain the search warrant on Jones' home, the department is investigating a complaint that a "person illegally hacked" into "a web-based platform" developed by the Florida Department of Health for "incident and emergency planning" in November and sent a message to the multi-user account group.

"[I]ts time to speak up before another 17,000 people are dead," the group text read. "You know this is wrong. You don't have to be a part of this. Be a hero. Speak out before it's too late."

Florida police said they determined Jones' Tallahassee home was the location from which the unauthorized message was sent. "Agents knocked and called Ms. Jones both announcing the search warrant and encouraging her to cooperate. Ms. Jones refused to come to the door for 20 minutes and hung-up on agents," the agency said. "After several attempts, Ms. Jones allowed agents inside. Agents entered the home in accordance with normal protocols and seized several devices that will be forensically analyzed. At no time were weapons pointed at anyone in the home."

Appearing on CNN Monday evening, Jones denied any involvement with the alleged hack.

"This is just a very thinly veiled attempt of the governor to intimidate scientists and get back at me while trying to get to my sources," Jones told CNN, adding that she was "not a hacker" and the message was "not the way I talk."

"The number of deaths that the person used wasn't even right," she said. "They were actually under by about 430 deaths. I would never round down 430 deaths."

Lawrence Walters, an attorney for Jones, said in a statement that the video showed "unnecessarily reckless and aggressive behavior" by officers and vowed to "pursue all lawful avenues to seek return of our client's property and vindicate her civil rights."

"Our client was fully cooperative yet had guns pointed at her and her family," he said. "We are concerned that these actions may be retaliation in response to her whistleblower claim against the Department of Health and her criticism of the Governor's COVID 19 response."

Jones, who launched her own dashboard after being fired using crowdfunded money, had provided daily updates of the state's coronavirus data but said there would be no update on Monday because the agents took all of her "hardware and tech."

She also alleged that the governor of Florida was behind the raid.

"DeSantis needs to worry less about what I'm writing about, and more about the people who are sick and dying in his state," she told CNN. "And doing this to me, will not stop me from reporting the data, ever."

A spokesperson for Desantis pushed back, telling CNN that "the governor's office had no involvement, no knowledge, no nothing, of this investigation."

Following the raid, Jones launched a GoFundMe campaign to raise money for a new computer and a "hell of a good lawyer."

Nearly 20,000 Floridians have died from the coronavirus and the state's total infections top 1 million. DeSantis, who has rejected medical advice on coronavirus restrictions and banned cities from requiring residents to wear masks, has consistently received some of the lowest approval ratings in the country for his handling of the pandemic. A South Florida Sun-Sentinel investigation published last week showed how the governor "misled the public on the COVID-19 pandemic" with "secrecy and spin."

State officials said that Jones was fired in May after she "exhibited a repeated course of insubordination" and made "unilateral decisions to modify the Department's COVID-19 dashboard without input or approval from the epidemiological team or her supervisors." She alleged that she was terminated for refusing to cast coronavirus data in a more favorable light. She told USA Today that the email that sparked the probe was sent after a "purge" of Department of Health leaders.

"It's like a massacre. And those aren't the only people that have been fired or left," she told the outlet.

Jones also warned that her electronic devices contained confidential messages from state employees that could get them fired and urged them to be careful.