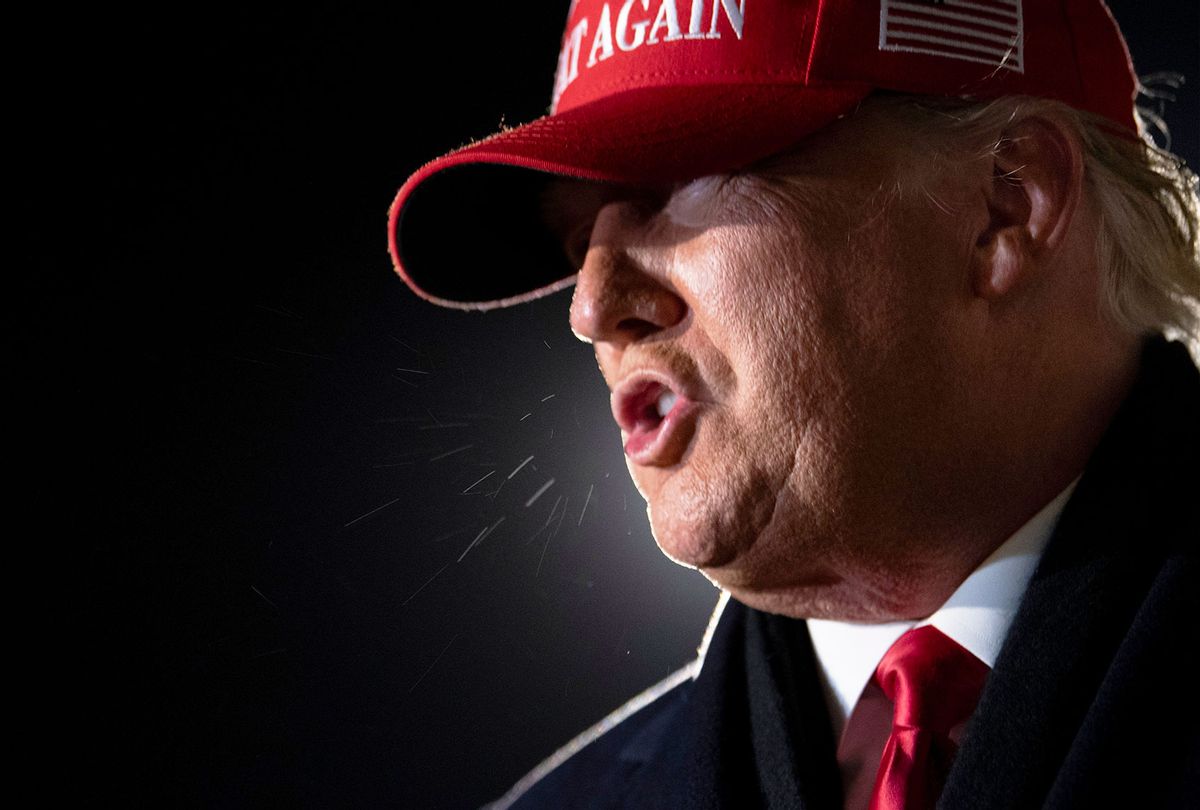 The payment, reported on Nov. 19, was made to a company called DT Endeavor and came out of the campaign's "recount" account, according to the filing. Trump's financial disclosures show that DT Endeavor I owns his personal aircraft, and that Trump owns DT Endeavor I through his revocable trust — meaning that the donor-funded $16,800 ended up in his pocket.

Flight records suggest that the $16,800 funded a short round-trip flight from Washington to Philadelphia on the day after the election.

The Trump Organization owns a number of aircraft, including a screamingly Trump-branded 757 jumbo jet. But that particular plane has been grounded since 2019, Jon Ostrower, editor-in-chief of The Air Current, recently reported. Trump's Cessna Citation X — a 1997 nine-seater which he used extensively, and for a time illegally, on the 2016 campaign trail — appears to have made these flights.

In order to re-legalize the plane in 2016, Trump created DT Endeavor I. Until last month, this Trump company had never been directly paid by the Trump campaign, even in the campaign's early days, according to FEC records.

Private aviation booking companies told Salon that the $16,800 sum would likely cover only a short private flight, especially to charter a Cessna Citation X, one of the fastest jets out there.

The payment was dated Nov. 19, but flight records recorded by ADS-B, the world's largest such database, show the Cessna has not flown since Nov. 5.

The same database shows Trump's jet made a Nov. 3 flight from Oxford, Conn., to LaGuardia Airport in New York, to Washington, where the campaign held an election night party at the White House. However, an Election Day trip cannot be paid by a post-election fund.

In the early hours of Nov. 4, Trump emerged to prematurely and falsely declare victory. The next day, his jet made the round trip from Washington to Philadelphia.

That afternoon, Rudy Giuliani tweeted that he was "en route" to Philadelphia from Washington along with members of the Trump campaign's legal team. (Giuliani, the president's personal attorney, had spent the previous night at the White House election party.) Later that day, he and Eric Trump held a press conference which prematurely and falsely declared victory in Pennsylvania. The pair threatened to file lawsuits over false allegations of election fraud in the state.

A major private aviation charter company told Salon that $16,800 price would fit the Washington-Philadelphia round trip. It would charge a little under $15,000 for the Cessna Sovereign, which is a slightly smaller model.

Giuliani's communications director, Christianné Allen, told Salon that "to my knowledge, Mayor Giuliani did not" take the Trump jet in recent weeks. Asked repeatedly whether her information had come from Giuliani himself, Allen would not reply.

Though this was the Trump campaign's first payment for use of the jet, FEC filings show that Trump Victory, one of two joint fundraising vehicles between the campaign and the Republican National Committee, has paid the president through DT Endeavor three times in total: $3,500 on Oct. 9; $25,900 on Oct. 1; and $28,000 on July 20.

Those payments appear to line up with a few short campaign-related flights. The $28,000 payment appears related to a July 17 round-trip flight from White Plains to Washington.

Guilfoyle is finance chair for Trump Victory, the committee which footed the bill for the flight.

The New York Times reported in August, the month following that flight, that campaign staff and donors had sharply criticized Guilfoyle for her profligacy and specified private flights:

More concerning to some donors and campaign aides has been private plane use by Ms. Guilfoyle and her team, which has caught the eye of several staff members. In January, as requests started coming in for private flights, the campaign had to work out a plan for approving such trips, which must be listed as in-kind contributions or reimbursed by the campaign in order to comply with campaign finance laws.

Ms. Guilfoyle's private flights did not violate those laws, although in one case, two of her aides, without seeking prior approval, took a private flight to a fund-raising event in March. The campaign then had to reimburse for the trip at a cost of tens of thousands of dollars, according to two people familiar with the trip.

Chief campaign spokesman Tim Murtaugh told The Times that donors had paid for all flights categorized as in-kind contributions to the campaign.

"In any event, the cost of flights and the efficiencies they provide are investments in fund-raising events that raise millions of dollars for the president's re-election," Murtaugh said.

But those payments shuttled $28,000 into Trump's pockets.

It is not clear whether Guilfoyle or other Trump Victory officials or surrogates took previous flights on the jet, and if so, how those payments were settled.

Ultimately, the private flights on Trump jets are subsidized by Trump campaign donors, and the $16,800 specifically came from contributions to the outgoing president's efforts to overturn the election results.

Days after the Nov. 3 election, the campaign blasted supporters with emails seeking donations to help fund its legal challenges to Trump's election defeat in key states. The fine print in the first wave of emails said 60% of donations would first go to pay down the campaign's outstanding debts, with any overage going to the recount account.

However, a few days later, Trump officially launched his Save America leadership PAC, a committee which would allow him to line his own pockets. Afterwards, the fundraising fine print was changed to put the PAC ahead of the campaign's debts. The recount effort still took second billing.