Will an army of canvassers make the difference for Democrats in the Peach State? 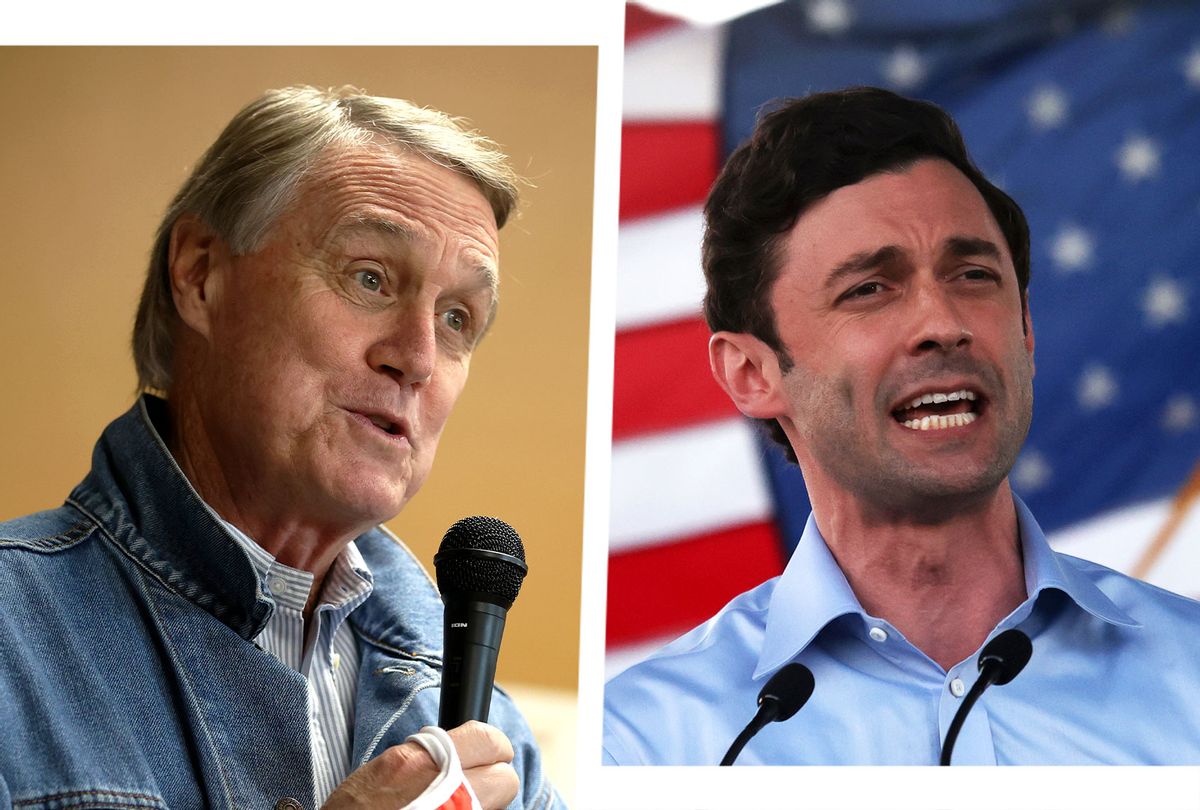 On the Saturday before Thanksgiving, Brandon Brown appeared to have no room in his busy schedule for menu planning. The field director for the New Georgia Project had just come from a voter registration drive, one of a half-dozen planned around the state. He'd popped in on a Zoom meeting with about 4,000 volunteers. Soon he would be embarking on a hiring spree.

The organization had set itself an ambitious goal: knocking on 1 million doors before the Jan. 5 U.S. Senate runoff election. And for the task, a small army of foot soldiers would be required. "We're looking for anywhere from 200 to 300 canvassers to knock on doors across the state of Georgia," Brown said.

The Democratic U.S Senate candidates Jon Ossoff and Raphael Warnock are also sending canvassers into the streets, and that represents a new turn of events in the pandemic era. When COVID hit in March, the national Democratic Party and many candidates and independent groups curtailed door-to-door canvassing out of health concerns, while the Republicans continued their ground game. Some say that had negative consequences for Democrats, particularly in down-ballot races.

Now that the balance of power in the Senate is resting in the hands of Georgia voters, Brown and others have been getting ready to go door-to-door. "We wanted to make sure that we had a plan if we were going back into the field," Brown said. For the New Georgia Project, the plan includes ready access to personal protective equipment, testing and contact tracing.

The renewed interest in canvassing is happening when COVID cases are on the rise in Georgia and across the country. That may explain the careful message coming out of the Democratic Senate campaigns: "The stakes of turning out Georgians to vote for Jon Ossoff and Raphael Warnock could not be higher. In close consultation with public health experts and an epidemiologist, we've created an in-person voter contact program with strict protocols that will allow organizers and volunteers to safely register new voters and knock doors across the state," according to a statement released from the Warnock campaign.

The Warnock campaign also shared a list of safety procedures with Capital & Main that included masking, distancing, the availability of hand sanitizer and a constant reevaluation of protocols.

Mijente, a multiracial Latinx organization, is one group that persevered and knocked on doors in Georgia and North Carolina in the weeks leading up to the November election while others retreated. Tania Unzueta Carrasco, the political director of Mijente, said that face-to-face, socially distanced canvassing is particularly critical for new voters or infrequent ones. Her organization plans to knock on the doors of all 290,000 Latino households in Georgia.

Mijente was connecting with fewer than 2.5% of people contacted by text or phone, compared to 25% to 30% of people they reached at the doors, Unzueta Carrasco said. "People were just getting saturated with these messages because nationally, there wasn't a lot of coordination," she said.

At the doors, it's not as easy to avoid contact as it is when reached by phone or text, and "relational" canvassing—where people contact those in their own personal networks—leaves out those who lack such connections. At the doors is "where most of the valuable conversations and movement with people came from," she maintains.

But early on in the pandemic, Mijente canvassers met resistance as case counts rose. "We were getting negative feedback from people who were like, 'Why are you guys on the doors? This is dangerous,'" said Unzueta Carrasco. The atmosphere shifted after the Black Lives Matter protests erupted in late May and widespread demonstrations did not lead to large COVID outbreaks. "I think that actually created an opening and an understanding of how to be outside and interacting with people in a safe way," she added.

Mijente is not the only group that had a significant door knocking campaign leading up to the general election. UNITE HERE locals ran canvasses in Arizona, Nevada, Florida and Pennsylvania. For hospitality union members, it was their experience delivering meals to shut-ins as part of a publicly funded program that gave them the confidence that they could safely canvass in a pandemic, according to Rachel Sulkes, communications director for UNITE HERE, Local 11, which represents hotel workers in Arizona and Southern California. (Disclosure: The union is a financial supporter of Capital & Main.)

After the economy shut down in April, the Los Angeles Hospitality Training Academy, a business-labor partnership, received city and county funding to deliver meals to seniors and homeless people housed in hotel rooms as part of a program to protect a vulnerable population from COVID infection.

By July, the union local had set up a canvass in Arizona under the guidance of an epidemiologist, enduring not only COVID risk but day after day of extreme heat. In Arizona alone, Local 11 joined a coalition of organizations knocking on over a million doors without reporting a single case of COVID, according to Sulkes. To her, that on-the-ground presence proved crucial.

In a PowerPoint released to the media after the election, the union touted its decade-long investment in a voter-engagement program in Arizona, a state where Republicans stilloutnumber Democrats. Since 2008, voter registration and turnout have increased by nine points, and turnout in majority Latino precincts increased by as much as 20%, according to the union.

And, as with Georgia, Arizona turned blue. The Grand Canyon State will be sending a Democrat to the U.S. Senate. Mark Kelly, a retired astronaut, beat the incumbent Sen. Martha McSally, during an election when President-elect Joe Biden generally outperformed down-ballot Democratic candidates.

But is this replicable in Georgia? A 2016 analysis of hundreds of field experiments makes modest claims for the power of the canvass. If a typical canvassing campaign succeeds in interacting with one-quarter of its targets, then the overall effect on the group's turnout is one percentage point or less. Still, that could make the difference in a close election.

The Georgia Senate races could be close, if the Nov. 3 vote tallies can serve as a predictor. The four candidates are headed into a runoff because none received more than 50% of the vote. Ossoff, an investigative journalist, won 48% of the vote, compared to Perdue's 49.7%. If Warnock, a pastor at the historic Ebenezer Baptist Church, attracts the votes of the seven other Democrats in the November election while Loeffler gains those of the five vanquished Republican candidates, the two adversaries would be separated by a point in January, with Loeffler in the lead: 49.3% v. 48.4%. (Neither calculation takes into account the votes of third party candidates.) Still, the odds of Democrats capturing both Senate seats in a special election are not high, say analysts.

Gregory Huber, a professor of political science at Yale University who studies voting behavior, says he's skeptical that a more robust ground game would have made a big difference for the Democrats in November's competitive Senate races, either through persuasion or by mobilizing infrequent voters likely to vote for a Democrat. That's because the expansion of voting opportunities during the pandemic also expanded turnout among those who might typically have trouble getting access to the polls.

"I don't know if we've got much evidence that these more marginal voters were left by the wayside by the decline in in-person mobilization," Huber said.

Of course, Georgia has been leaving voters by the wayside for years, drawing national attention for election officials' zealous efforts to purge voters from the rolls in 2019. During this most recent election, many in Georgia braved hourslong lines for their chance to vote, a function of poll closures that have disproportionately affected African Americans.

A constellation of organizations like the New Georgia Project, Asian Americans Advancing Justice, Black Voters Matter and Stacey Abrams' Fair Fight have been credited for increasing turnout in a state that last went blue in 1992. After Abrams narrowly lost the governor's race to then-Secretary of State Brian Kemp, she set to work addressing what she saw as efforts to suppress the votes of minorities, young people and poor people in the state.

"We've been able to make great strides in mitigating many of the harms we saw perpetrated against Georgia voters in 2018, from purging to closure of polling places to mismanagement and underfunding of resources for polling locations," Abrams told NPR a day before the general election.

The increase in voter registration was also attributable to the full implementation of the Motor Voter Act in 2016 under then Republican Gov. Nathan Deal. Allowing applicants for drivers' licenses to automatically register disproportionately expanded the number of voters who lean Democratic, according to the Wall Street Journal. But it has likely led to increased turnout across the board.

Meanwhile, Republican Sens. Kelly Loeffler and David Perdue are firing up their base. They call themselves the "firewall" that stands between their constituents and the far left, even though Ossoff and Warnock have been rallying voters in support of a relatively moderate agenda of economic relief, protecting people with pre-existing conditions and getting the pandemic under control.

It's the high stakes around this election that has created a consensus on the Democratic side about the importance of the canvass. Democrats will need to campaign in maximum overdrive to have a chance of winning back control of the Senate. "If the Democrats can't get at least the same level of turnout that they got in the presidential election, there is absolutely no way that they win the Senate races," says Huber.

Unzueta Carrasco says she does not feel anyone should risk their life to knock on doors. But for some of her canvassers, the status quo is also fraught with peril, and that creates its own motivation. In addition to highlighting the presidential race in November, Mijente targeted two incumbent sheriffs in Cobb and Gwinnett counties whose cooperation agreements with the U.S. Customs and Border Protection have "created an atmosphere of terror for immigrants going about their lives," Azadeh Shahshahani, a lawyer with Project South, an advocacy group based in Atlanta, told NPR. Those campaigns resulted in the election of the first Black sheriffs in those counties.

"Our communities are used to measuring risk," Unzueta Carrasco said. "When we were figuring out whether to door knock or not, what's at stake definitely came into the picture."