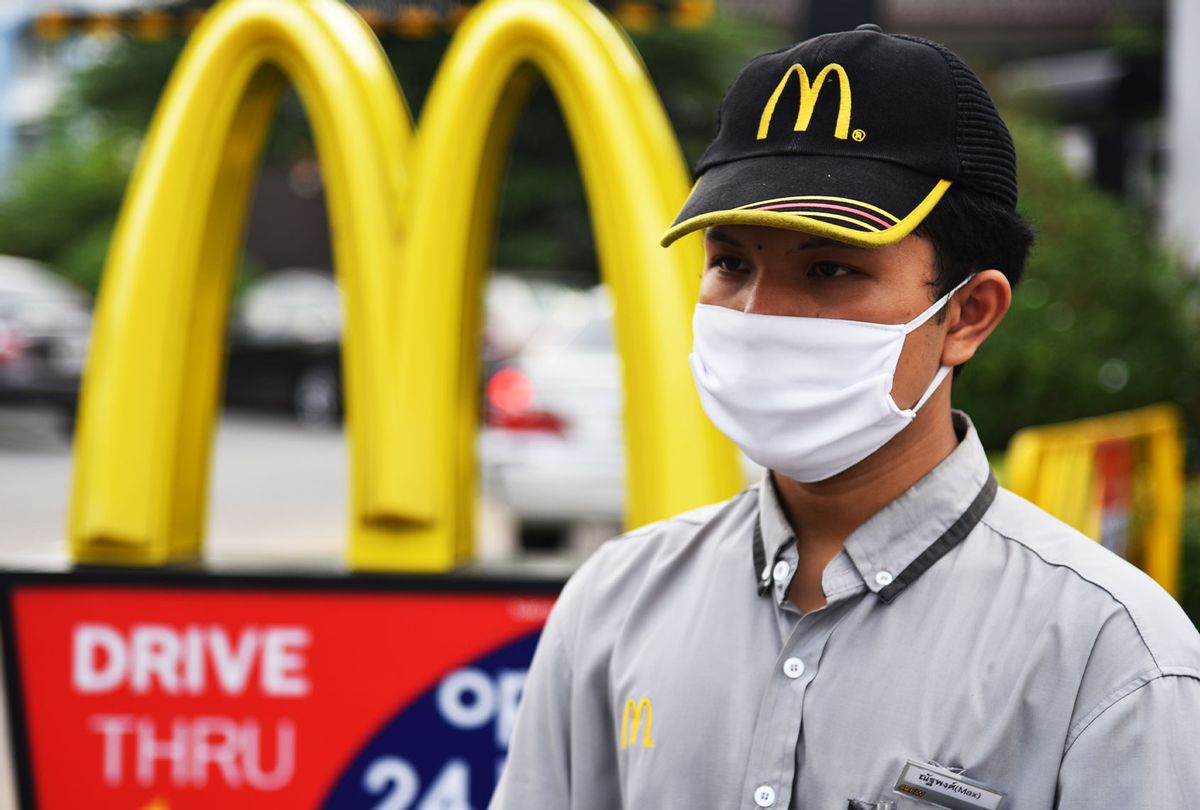 An employee of McDonald's wearing a protective mask as a precaution during the Covid-19 pandemic. (Getty Images)
--

Millions of Americans employed at some of the country's largest companies have had to rely on food stamps and Medicaid, with giants like Walmart and McDonald's employing the most workers whose income is subsidized by taxpayers, according to a new study.

The report found that, in every state studied, Walmart was one of the top four employers whose workers rely on food stamps and Medicaid. McDonald's is among the most subsidized employers in at least nine states.

More than 2% of the Walmart workforce in states like Georgia and Oklahoma have had to rely on Medicaid benefits, a number that rises to more than 3% in Arkansas, where the company is based.

The report cited data taken before the coronavirus pandemic hit, noting that the issues have likely grown worse.

"The economic effects of the covid-19 pandemic have further exacerbated conditions for these workers, increasing the importance of federal and state safety net programs to help them meet their basic needs," the report said.

Sanders said the report showed that America's largest companies are relying on "corporate welfare from the federal government by paying their workers starvation wages."

"That is morally obscene," he said in a statement. "U.S. taxpayers should not be forced to subsidize some of the largest and most profitable corporations in America."

Sanders noted that the companies have reaped "billions in profits and giving their CEOs tens of millions of dollars a year" while failing to pay workers a "living wage."

"If not for the employment access Walmart and other companies provide, many more people would be dependent on government assistance," she told The Washington Post, which first reported the study. "A small percentage of our workforce comes to us on public assistance, and we remove employment barriers and create opportunities for individuals that too many overlook. Walmart has invested more than $5 billion in increased pay, expanded health benefits, and a debt-free college program over the past five years and our starting rate is more than 50% higher than the federal minimum wage, which Washington hasn't changed in more than a decade."

McDonald's spokeswoman Morgan O'Marra argued that the data was misleading.

"The average starting wage at U.S. corporate-owned restaurants is over $10 per hour and exceeds the federal minimum wage," she said in a statement. "McDonald's believes elected leaders have a responsibility to set, debate and change mandated minimum wages and does not lobby against or participate in any activities opposing raising the minimum wage."

The company had long opposed increases to the minimum wage but said last year that it would stop lobbying against such measures.

The GAO report shows that 70% of the 21 million SNAP or Medicaid recipients work full time.

The data dovetails with previous research.

A 2013 study from researchers at the University of California at Berkeley and the University of Illinois at Urbana-Champaign found that 73% of people receiving government benefits were from "working families" but had "jobs that pay wages so low that their paychecks do not generate enough income to provide for life's basic necessities."

The study found that the average frontline fast-food worker earns just $8.69 per hour and that about 87% of them did not receive health benefits, leaving them to "rely on taxpayer-funded safety net programs to make ends meet."

The researchers released another report in 2015 showing that more than half of all fast-food workers were in families where at least one member relies on public benefits, costing taxpayers more than $150 billion each year.

Part of the problem is that wages have not kept up with growth in productivity and corporate profits for decades, researchers say. Another key issue is that the federal minimum wage, which is far below the rate it was for decades when adjusted for inflation, has stayed the same for over a decade and has been increased just once in the last two decades.

Seattle lawmakers voted to raise the minimum wage to $15 by 2017 five years ago. Despite concerns that businesses would leave the city and workers would see their hours cut, the results have largely been positive. There has been no great business exodus from the Emerald City and while there was a rise in workers who had their hours cut, their salaries largely stayed the same while the vast majority of workers "enjoyed significantly more rapid hourly wage growth," according to a study published by the National Bureau of Economic Research in 2018.

Another study from Berkeley looked at minimum wage increases in Seattle, San Francisco, Oakland, San Jose, Chicago, and Washington D.C., which ranged from $10 to $13 in 2016, found that the increases did not result in widespread job losses.

"We find that they are working just as the policymakers and voters who enacted these policies intended," Sylvia Allegretto, the co-author of the study and co-chair of Berkeley's Center on Wage and Employment Dynamics, told the Seattle Times. "So far they are raising the earnings of low-wage workers without causing significant employment losses."

An analysis of 138 state-level minimum wage increases between 1979 and 2016 published in the Quarterly Journal of Economics last year found that the loss of jobs that paid below minimum wage was offset by new higher-paying jobs.

Betsey Stevenson, an economist at the University of Michigan who served on President Obama's Council of Economic Advisers, argued that the best way to approach a minimum wage hike amid the coronavirus pandemic was to couple it with targeted aid for struggling small businesses.

"The federal minimum wage is currently set way too low," she told the Post. "We really don't want workers to be bearing the increases of those costs. As a society we should be sharing that."