Happiest Hanukkah from this crispy latke, egg and cheese sandwich

"Potato pancake inside of the egg sandwich?" It's delicious 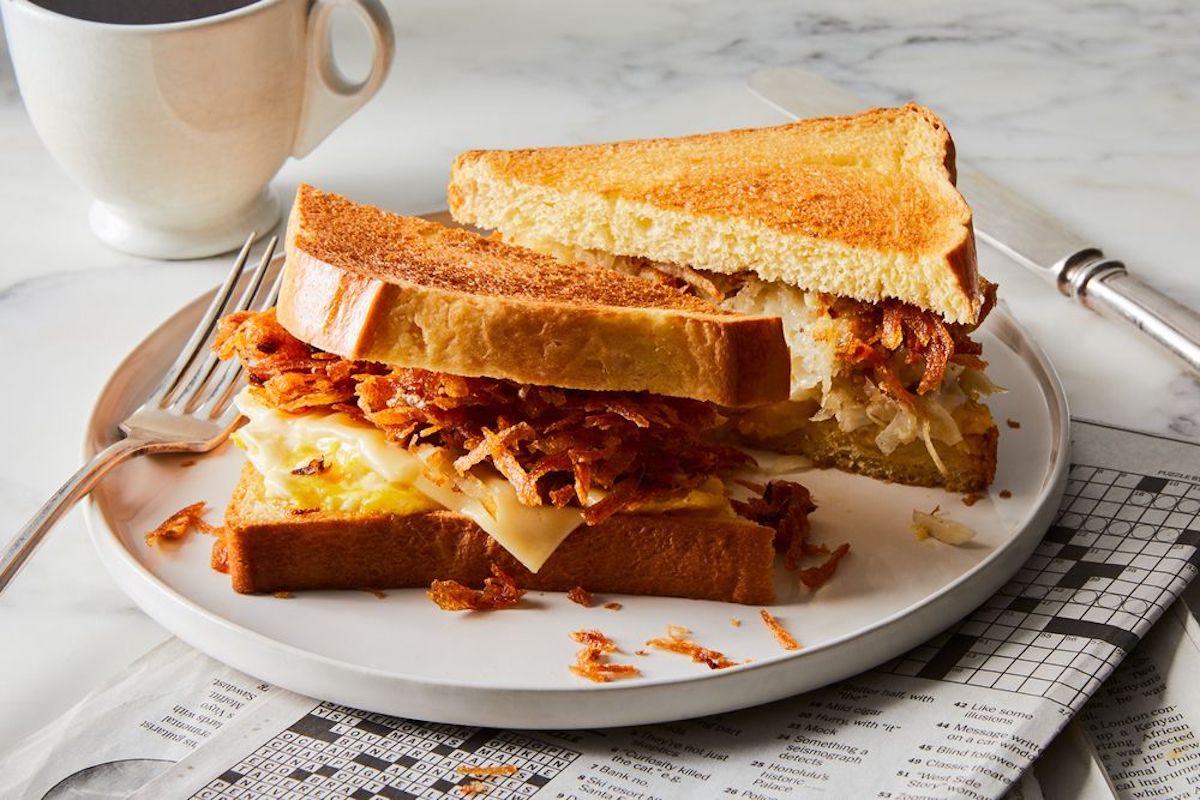 Egg and cheese sandwiches are often just that: egg and cheese on a roll or bagel or toast. Just as often, they co-star a choose-your-own breakfast meat, be it bacon or sausage or ham. But arguably the most festive version, especially during Hanukkah, features a crispy, chewy latke.

The latke, egg, and cheese sandwich on house-baked challah from B&H Dairy in Manhattan's East Village has technically been available for years, yet only just became a permanent menu item.

"One of the things that drives my eating is being able to go to a restaurant and put together disparate elements to make something even better," Lawrence Weibman, the de facto creator of the sandwich, told me over the phone.

Weibman doesn't work for B&H. He's a regular customer, as well as a video producer and food-lover, who runs the Instagram account @nycfoodguy. He's always on the hunt for the most exciting dishes at restaurants, even if they're not on the menu—yet.

The native New Yorker moved to the East Village in 2008 to glimpse some of the "old" New York that constantly appeared in books and movies, but wasn't in his neighborhood growing up: "To me, the East Village is one of the few areas left in the city that still has true bohemian soul. This is a place that embodies the last vestiges of the New York of the past. B&H embodies [that feeling]."

B&H does represent classic New York charm, where restaurant employees know the names of their regulars, and vise versa. Weibman is just as familiar with the owners of B&H, Ola and Fawzy Abdelwahed, as well as the restaurant's cooks and front of house employees, as they are with him. Sometimes, they'll name specials after certain customers.

"I said you're more than welcome to create your own dish. In the beginning, it was just a conversation," Ola told me over the phone, describing the evolution of Weibman's sandwich from suggestion to menu item. At first, she was skeptical: "Potato pancake inside of the egg sandwich? But he said, 'It's delicious,' so I said 'Okay, I'll try one.'" Her thoughts now? "It's awesome, everybody loves it."

The addition of a latke to an egg and cheese sandwich was, as is the case with many ingenious creations, an unplanned yet illuminating success. "I was probably craving bacon one day," Weibman said. As B&H is both a pescetarian and Kosher establishment, an alternative came to mind: an order of their salty golden-brown potato pancakes, one of which he slid onto the egg and cheese sandwich. "What goes better with squishy and melty, than crispy-crunchy? It's all about sandwich construction."

Speaking of construction, Weibman has thoughts. "Fried eggs, over medium, with American cheese. You want to be able to squeeze down and have that yolk in the middle, not on top." The challah—B&H's homemade signature—is untoasted: "You want the squishy bread, because you have to be able to smush it down a little to fit it in your mouth once the latke goes in, unless you're a boa constrictor."

And of course, there's the condiments factor. For Weibman, that's salt and pepper, plus ketchup and hot sauce. Staying true to his brand, Weibman didn't just go for the hot sauce on the counter. "The guys who work there have their own stash of hot sauce in the fridge . . . sometimes they had a ghost pepper sauce. The real secret was to ask for the hot sauce in the back." He says that extra heat, with the sweetness from ketchup, are non-negotiable.

Until just recently, to get this sandwich at B&H, one had to order an egg and cheese sandwich and side of potato pancakes, then rearrange accordingly. Yet, as Weibman got to know the cooks and owners more, he felt comfortable requesting the whole sandwich ("a trepidatious ask," he added).

When he first shared photos of the sandwich on Instagram, he noted it was an off-menu creation. "But then people started coming in and ordering it. They have other dishes named for regulars. I'd mess with [Ola] and be like, 'Where's mine? I'll take a sign!'"

"I said, 'Next time we print the menu, I promise we'll put your name on it,'" laughed Ola, relaying the same story. "Some new customers see it online, and say they want it just like the photo. For me, it was something new. It's very popular."