No, Obama, we do mean "defund the police": It's not a snappy slogan, it's a demand for justice

The former president thinks the "snappy slogan" is turning people off. I know someone he should meet and listen to 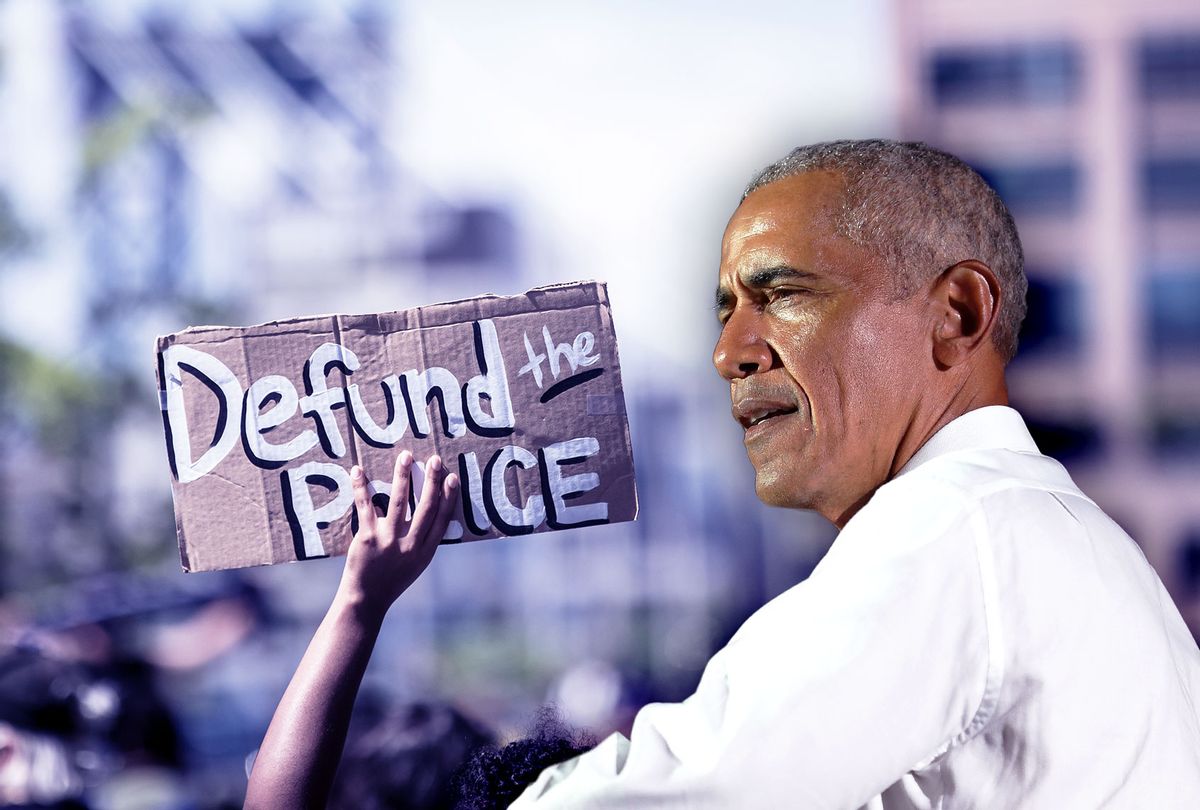 If I was big-time, rich and connected, I'd ask Barack Obama to sit down and talk with my old buddy Chuck about defunding police.

"If you believe, as I do, that we should be able to reform the criminal justice system so that it's not biased and treats everybody fairly, I guess you can use a snappy slogan like 'Defund The Police,' but, you know, you lost a big audience the minute you say it, which makes it a lot less likely that you're actually going to get the changes you want done," Obama recently told Peter Hamby on Snapchat's Good Luck America.

"But if you instead say, 'Let's reform the police department so that everybody's being treated fairly" Obama continued, "You know, divert young people from getting into crime, and if there was a homeless guy, can maybe we send a mental health worker there instead of an armed unit that could end up resulting in a tragedy?' Suddenly, a whole bunch of folks who might not otherwise listen to you are listening to you."

What Obama doesn't get — and he's not alone on this among well-to-do Democrats — is that people who aren't listening aren't being put off by a snappy slogan. This country has historically ignored poor Black people, and this debate over how to frame "defund the police" is one of the latest manifestations of that problem.

My friend Chuck is a big Obama fan. He would've arrived at our hypothetical meeting a day early. When the doors to the imaginary meeting place opened, Chuck would walk his lanky 6'6" frame into the room, dipping his clean-shaved head under the door frame to get in. His face would light up at the sight of our nation's first Black president. He'd be in awe. Like me and other '80's babies, Obama was his introduction to politics. He was the first person we voted for. He dared us to dream. He primed us to believe in his snappy slogans, like "Real Change."

Because they both love basketball, Chuck would probably challenge the former president to a game of one-on-one. I imagine that Obama would take him up on that offer because he's a natural competitor. These two spindly dudes could probably go back and forth about hoops for hours, so I'd have to place myself in this meeting to make sure they stayed on task.

"Ayeee, Chuck," I'd say, as I always said to him in passing when he and the other big fellas hung by the corner. "How does defunding the police sound?"

And like me and many other victims of police violence from our neighborhood, I believe Chuck would say, "Throw the whole department away!"

When wealthy Democrats like Obama and Joe Biden, his vice president and now the president-elect, advocate for the police, they talk about how the "brave" men and women in law enforcement keep us safe. Then they cling to the "bad apple" argument when officers kill unarmed Black people, or are caught breaking laws themselves.

Now, Chuck and I can't speak for all Black people from poor neighborhoods across the country. But knowing that 28% of the people killed by police in 2020 have been Black, despite being only 13% of the population, is a problem. Knowing that at the height of stop and frisk, Black and Latinx people in New York were nine times more likely to be stopped by the police is a problem. Knowing that in 2018, according to Pew Research, "Black Americans represented 33% of the sentenced prison population, nearly triple their 12% share of the U.S. adult population," is a problem. The amount of evidence that proves this system is broken and racist is overwhelming. You'd have to be delusional to see anything but failure, unless you have the luxury of living safely, on the other side of all of our pain.

That's what's at the heart of the "snappy slogan." The people on the front lines­­ — the protestors marching until the seams on their sneakers unravel, the teachers explaining how lopsided our system is to their students who have to survive it, some of whom have parents serving time because of that failed system, probably don't see anything glib about calls to defund the police.

To be clear, defunding isn't about firing a bunch of people and walking away. It's about retraining personnel and creating different positions inside of police departments that will help those departments serve our communities in a more effective way. Police as we know them have too much power and have never served my community. In my own first-hand experience, they have always been menaces, from the multiple times they chased me for nothing, to the time one cop kicked me on the basketball court, to the time two police officers pulled their guns on me and a friend just we because we had walked down the alley and stopped by my house.

But I'd ask Chuck to share his story with Obama — and not the one about his cousin Bucket who did 10 years for nothing, nor the one about the multiple times husky plain clothes-knockers rolled up on dice games in unmarked cars, slammed us around and pocketed all the money. I'd ask to Chuck to tell Obama the story about his teeth.

It's a simple, straightforward tale: On one of those summer nights that came with a much-needed breeze after a day so hot you needed to be outside after the sun went down, Chuck and the guys were sitting on Chuck's front steps. And a cop — who remained employed by the Baltimore City Police department up until the day he retired a few years back, mind you — came by and told Chuck to take it inside. Chuck was sitting on his grandma's steps, his own home. He ignored the cop's request and had his teeth knocked out as a consequence.

It's been about 10 years since that summer night, and Chuck's teeth are still jagged and chipped up from that incident. No, there was no investigation. A number of reasons prevent people from neighborhoods like ours from filing Internal Affairs reports, like the fear of nothing happening when cops investigate cops and the inability to take off work. But the main reason is a justified fear of police reprisal.

After Chuck finished, I would tell Obama that I do feel him on adjusting the language to engage more people, I really do. But that can't happen if the adjusted language disrespects us to our core. Then respectfully, I'd ask him exactly what kind of bridge he is trying to build. Because it won't happen at all if leaders like him continue to burn down his own side. Like Kwame Ture (Stokely Carmichael) pointed out, "One does not fight to influence change and then leave the change to someone else to bring about."

I know Chuck would feel me. I imagine Barack might, too. So before Chuck could ask to flick it up with the first Black president, passing me his phone so I could snap the pic, I'd briefly explain the fiscal benefits of defunding from a local perspective.

Baltimore City's budget, passed in June, is $3 billion, with over $500 million of that funding the police. Our city's population floats around 600,000 residents and we will surpass 300 homicides for the sixth consecutive year. Last year, we had 348. To put it in context, Los Angeles has 3 million more residents, and ended 2019 with 95 fewer homicides. The current system of allocating money to the police in my city — to say nothing of the reckless way overtime is doled out — is not working. We are too invested in a system that has historically failed Black people. We can do better.

The $527 million for the police budget is just the beginning. The city has recently agreed to pay out more than $10 million in settled police misconduct lawsuits. Last month, Umar Burley and Brent Matthews were awarded $8 million in a settlement after being recognized as victims of the Gun Trace Task Force — eight Baltimore police officers convicted of a plethora of crimes themselves, from robbing and stealing to selling drugs and roughing up cases. Members of the GTTF planted drugs on Burley and Matthews and prompted a car chase that killed a man. Burley and Matthews were pushed into guilty pleas and both served time in federal prison.

It's important to mention that prior to the GTTF being exposed, Wayne Jenkins, their leader and star, had been lauded throughout his law enforcement career for making cases like Burley's and Matthews', showered with unlimited professional resources, including city money for personnel and overtime­­. And now more than a thousand of those cases are under review, and millions of dollars will be paid out directly to victims of the police officers' crimes against the people they pledged to protect and serve. But somehow it's always just "a few bad apples" causing the problems, as if they spoil by accident. People in power, like Obama and those he has ties to and influence with, won't acknowledge that the systemic problems with police power run too deep for simple reforms.

But now it's time for the photo to close our hypothetical meeting. "OK guys, say cheese," I'd say, hoping the former president heard me and Chuck, and would now be closer to understanding why defunding the police is too important a message to play rhetorical games with, too urgent to soften for affluent Democrats to feel comfortable. Chuck's broken-up smile would tell him that, too.