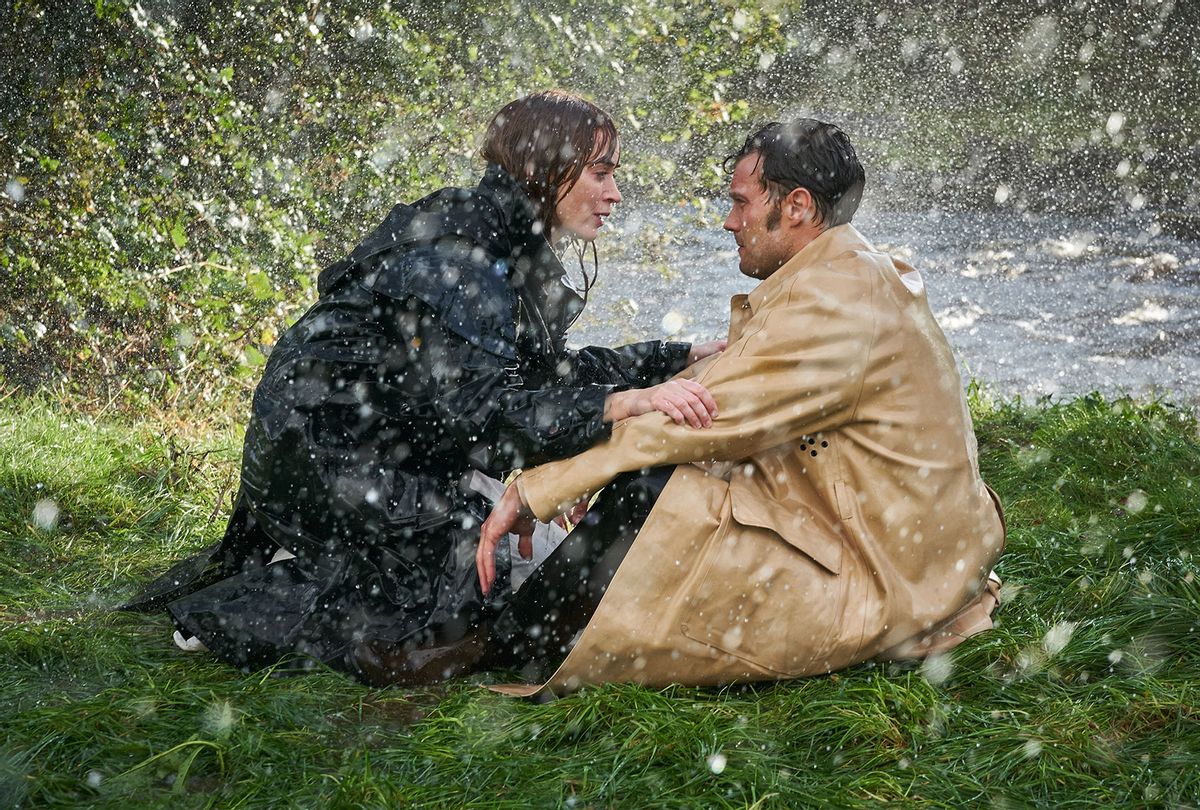 There are people who will tell you that John Patrick Shanley's "Wild Mountain Thyme" traffics in bumper-to-bumper Irish stereotypes, but those people will be a bit off the mark — "stereotypes" is a wildly inadequate word for how this fable-esque romantic comedy renders the quirks and customs of life in the verdant farmlands of Ireland's County Mayo. This sometimes enchanting (but always demented) soda farl of banter and blarney couldn't be a broader caricature of Irish culture if it were written by the Keebler elves and directed by a pint of Guinness.

We're talking about a movie so in love with its own lucky charms that it makes "Waking Ned Devine" feel like "In the Name of the Father" by comparison. Think that's overstating the case? The National Leprechaun Museum of Ireland responded to the trailer by tweeting "Even we think this is a bit much." That was after seeing only two minutes of it; this critic has seen the other 100 as well.

Shanley, whose script for "Moonstruck" suggests that he once had a slightly tighter handle on this sort of thing, brings his play "Outside Mullingar" to the screen like he's trying to fill every close-up with enough whimsical enchantment to reach the back row of a Broadway theater. The lethal intensity of this effect cannot be overstated; the only logical explanation for what happened here is that someone planted a bomb in Shanley's editing bay and timed it to explode if any cut of "Wild Mountain Thyme" dipped below 50 kilohertz of cartoon Irish charm per minute. Needless to say, nobody got hurt.

And yet, for a movie that often feels like a feature-length infomercial for Aer Lingus and builds to what might just be the single most absurd reveal in the history of narrative fiction (I couldn't explain it if I tried, and even Shanley himself appears to be unsure as to whether or not its worth taking seriously), "Wild Mountain Thyme" is awful hard to hate. How do you completely dismiss something so guileless and unrestrained that it makes Richard Curtis seem like Raymond Carver? Something that invites Emily Blunt to turn up the lass-next-door charm so high that it breaks the knob clear off the dial? Something — and this is important — that opens with emerald green aerial shots of the Irish coast followed by voiceover narration of Christopher Walken cheerily declaring: "Welcome to Ireland, my name's Tony Reilly, and I'm dead!"?

Anyone who manages not to spit out their Bailey's right then and there might find themselves absorbed in the saccharine nonsense that follows, if only to learn the mystery behind why Jamie Dornan's handsome farmer has resigned himself to a lifetime of unhappy bachelorhood. The truth will shamrock you to your bones.

If "Wild Mountain Thyme" is the fun-loving "Hillbilly Elegy" of the Irish farmlands — and it absolutely is — then Tony Reilly is its Mamaw. A plucky, hardscrabble widower who's been tending to "the sweetest rise of land you ever saw" for his entire life, all Tony wants is for his weird and sexy son Anthony (Dornan, charming in an aggrieved sort of way) to find some happiness in this world. And since this is at its core a romantic comedy, "happiness" is just another word for "marriage." Indeed, Tony won't pass down the family farm to his only child unless Anthony finds himself a wife.

The good news is that a beautiful and extremely eligible bachelorette named Rosemary Muldoon (Blunt) lives right on the other side of the gate, and she's been in love with Anthony from the time they were wee. And not just in love, but the kind of mad, inexplicable, pathological love that you typically only find in fairy tales and the DSM-V. The bad news is that Anthony is broken inside for some reason. The "why" of it never clicks, but the secret nature of his affliction is so intense that the one woman he whispers it to laughs so hard that she falls off a stone wall and nearly plummets to her death. It's not a sex thing (I don't think?), and it's nothing supernatural, but… well, the climactic scene where the truth finally comes out is one for the history books.

Despite his eccentricities, however, Anthony still radiates a dour and earthy sort of charm. He and Rosemary are bound by the smartly brusque stage banter that can only exist between two oblivious souls that are destined for each other, and her raging obsession with him is enough to keep the fire alive for them both. When Anthony walks away after ranting about how he's stuck on the farm like a tree and why Ireland is "a terrible place for a decent person," Rosemary turns to the nearest horse and laments that such monologues are "why she must have him."

She's willing to wait 100 years if that's how long it takes for the boy next door to realize that he's worthy of love, but not everyone shares her incredible patience. It's because the ailing Tony can't satisfy his hunger for something to happen that he calls in the calvary from far and away and threatens to bequeath the farm to his capitalistic American nephew Adam (Jon Hamm, spared an accent), who flies into County Mayo and immediately flags Rosemary as its finest crop. Hamm plays the square-jawed and straightforward Yankee with all of Don Draper's swagger and none of the charm, but he goes after what he wants (albeit in a flashy, finance bro sort of way), and that might be enough to win over the various people who've been holding their breath for Anthony to take action.

However ridiculous Shanley's depiction of rural Ireland might be (it turns out that "Wolfwalkers" isn't the only Irish cartoon being released this weekend), the fish-out-of-water business is clever enough to get a rise out of anyone who isn't too offended to laugh. Hamm brings some real "where's the nearest Starbucks?" energy to his quaint and rustic ancestral homeland, and Anthony is such a dull enigma that Adam poses a genuine threat to our sympathies even if he seems like the kind of guy who drinks Soylent and dabbles in some light eugenics during his free time.

We certainly understand where he's coming from when he raises an eyebrow at two-dimensional caricatures like Bad News Cleary (an old man named Cleary who always delivers bad news and spreads semi-believable rumors about Anthony falling in love with his livestock), and looks at Rosemary like he wants to rescue her. One relatively subtle bit of funny business involving a white raincoat finds Shanley at his best, and allows Hamm to split the difference between his stiff exterior and goofball underbelly — it's enough to appreciate the movie that "Wild Mountain Thyme" might have been had it settled on a more grounded tone and scaled the humor down to human levels.

But Shanley, God love him, seems to regard stories as a receptacle for all of the magic that's missing from real life, and he'd sooner cut off his head than take it out of the clouds. The sight of Anthony combing his farmland with a metal detector in search of some missing family lore feels like a fitting metaphor for Shanley's creative process. If "Wild Mountain Thyme" isn't really about anything deeper than its own forced sense of romance, the film comes dangerously close to self-awareness whenever its characters start musing about the double-edged nature of their dreams.

"The kind of dreams kids have make adults miserable," Adam declares, offering a harsh counterpoint to a film in which the rest of the characters have spent their whole lives chasing rainbows without a pot of gold to show for it. Of course, every aspect of "Wild Mountain Thyme" — from Stephen Goldblatt's richly saturated cinematography to Amelia Warner's stirringly traditional score — is hellbent on proving Adam wrong and rewarding the sense of wonder that Anthony and Rosemary have suffered from since childhood, but Shanley fails to transform their curse into a blessing. If Anthony is a tree, he isn't rooted in reality, and the only magic here is found in Blunt's ability to conjure a flesh-and-blood woman out of a pouty male fantasy.

That miracle is enough to make the damp spark between Anthony and Rosemary seem flammable enough to sustain the long, theatrical dialogue scenes that dominate the film's third act (even as they devolve into a heated competition to see if anyone can top Cameron Diaz's "Gangs of New York" performance for Most Irish Accent). But Shanley's foundation isn't strong enough to support the big "twist" that's coming, and the whole thing implodes in the kind of head-scratching mess that leaves you feeling like some dreams just aren't worth sharing with the world.

Bleecker Street will release "Wild Mountain Thyme" in select theaters and on VOD on Friday, December 11.

As new movies open in theaters during the COVID-19 pandemic, IndieWire will continue to review them whenever possible. We encourage readers to follow the safety precautions provided by CDC and health authorities. Additionally, our coverage will provide alternative viewing options whenever they are available.