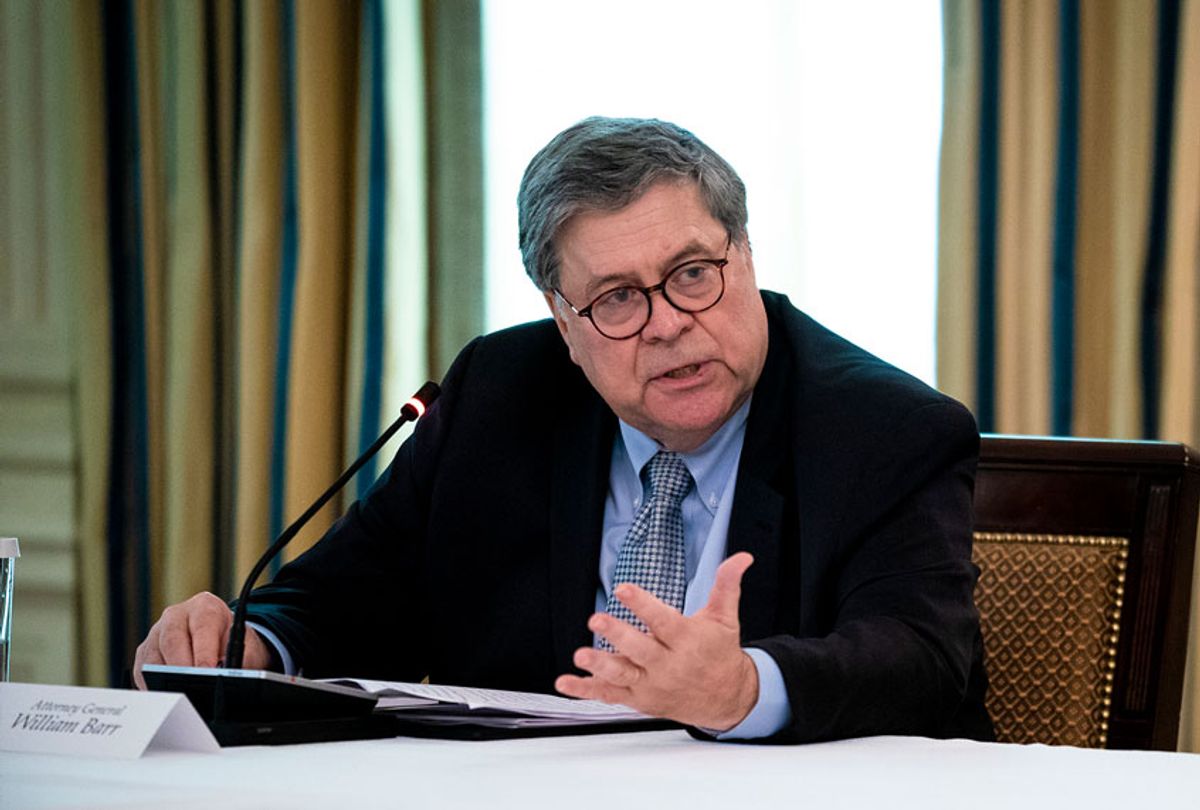 Attorney General William Barr speaks during in a roundtable with law enforcement officials in the State Dining Room of the White House, June, 8, 2020 in Washington, DC. (Photo by Doug Mills-Pool/Getty Images)
--

Attorney General Bill Barr is leaving the administration on Dec. 23, President Donald Trump revealed on Twitter Monday evening. Perhaps not coincidentally, the announcement came just as the Electoral College gave Joe Biden enough votes to officially become president-elect, yet another nail in the coffin for Trump's exceptionally dead efforts to remain in power. Trump likely wanted to distract from that development.

It's not exactly clear if Barr was pressured to leave or left of his own volition. He has come under fire from Trump for failing to find evidence of significant voter fraud in the 2020 election and also for failing to provide any damning revelations about Biden or his family before Election Day. But the letter Trump shared from Barr seemed to suggest the attorney general was leaving willingly.

Notably, while Barr said that the department is still looking into "voter fraud allegations in the 2020 election," he didn't give any hint that he's changed his mind since he told the AP there was no evidence of widespread irregularities that would change the result. This seems like a way to mollify Trump by referring to his conspiracy fictions without stating anything the department can't back up with facts.

The letter itself was over-the-top in its obsequiousness, lavishing the president with praise for everything he takes pride in and lashing out at his favorite targets, such as the Russia investigation.

Your record is all the more historic because you accomplished it in the face of relentless, implacable resistance. Your 2016 victory speech in which you reached out to your opponents and called for working together for the benefit of the American people was immediately met by a partisan onslaught against you in which no tactic, no matter how abusive and deceitful, was out of bounds. The nadir of this campaign was the effort to cripple, if not oust, your Administration with frenzied and baseless accusations of collusion with Russia.

Few could have, weathered these attacks, much less forge ahead with a positive program for the country. You built the strongest and most resilient economy in American history — one that has brought unprecedented progress to those previously left out. You have restored American military strength. By brokering historic peace deals in the Mideast you have achieved what most thought impossible. You have curbed illegal immigration and enhanced the security of our nation's borders. You have advanced the rule of law by appointing a record number of judges committed to constitutional principles. With Operation Warp Speed, you delivered a vaccine for coronavirus on a schedule no one thought conceivable — a feat that will undoubtedly save millions of lives.

This isn't any better than the kind of drivel you'd expect to hear on Fox News or OANN, let alone from the attorney general who took it upon himself to make the determination about whether former Special Counsel Robert Mueller's report found conclusive evidence that the president committed a crime. Barr's claim that the Russia investigation was "baseless" is just false — his department's own inspector general concluded the probe was properly predicated. But Barr has long since proved himself to be addicted to the right-wing disinformation sphere. And he probably thought buttering Trump up on his way out the door was the best way to avoid a humiliating ouster.

Of course, some might think this is a more humiliating way to leave than with an insult from Trump

Barr also decided to claim some excessive praise for himself:

During your Administration, the Department of Justice has worked tirelessly to protect the public from violent crime; worked closely with leaders in Mexico to fight the drug cartels; cracked down on China's exploitation of our economy and workers; defended competition in the marketplace, especially the technology sector; and supported the men and women of law enforcement who selflessly—and too often thanklessly—risk their lives to keep our communities safe.

Once Barr is gone, he will be replaced by Deputy Attorney General Jeff Rosen, which follows the ordinary course for the succession of power in the department. It's not clear if Rosen will be willing to take steps that Barr was thus far unwilling to take, such as making official DOJ claims that support Trump's bogus allegations of voter fraud or announcing a special counsel to investigate Hunter Biden.