Can progressives save Biden from disastrous economic policies? 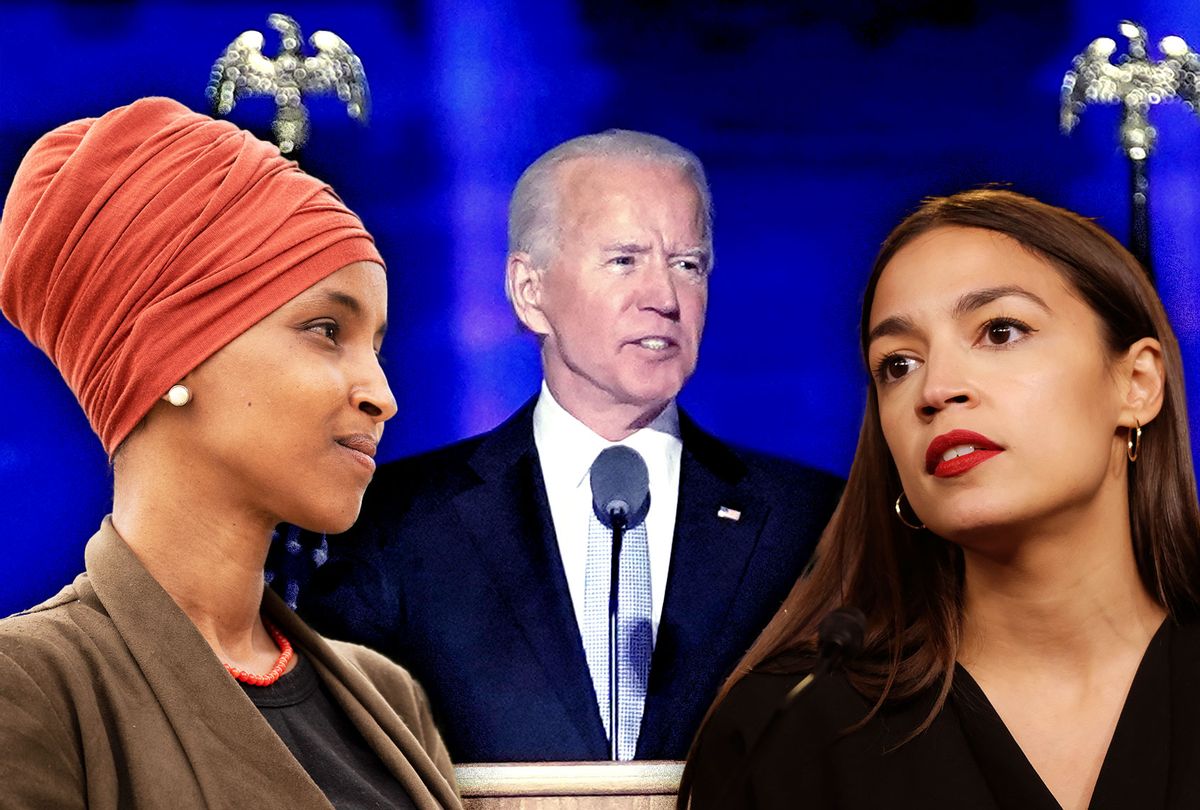 Since the 1970s, U.S. real wages have largely stagnated. After a century of real wages rising every decade, that stagnation changed the lives of the U.S. working class in traumatic ways. Likewise, since the 1970s, labor productivity grew steadily, aided sequentially by computers, robots, and artificial intelligence. The combination of stagnant real wages and rising productivity lowered labor's share of national income in favor of capital's. Profits consequently soared and took the stock markets with them. Income and wealth were redistributed sharply upward.

The post-1970 trauma of the working class was worsened, as traumas often are, by being minimally recognized and even less discussed in the media, among politicians, or in the academy. Workers thus encountered the end of the century of rising real wages individually as a mysterious evaporation of the American Dream or loss of an earlier American Greatness. They also reacted individually. More members of households (especially adult women) undertook more hours of paid labor outside the home to compensate for stagnant real hourly wages. Households also compensated by borrowing more heavily than any working class anywhere had ever done. Workers wanted so desperately to hold on to that American Dream.

Capital obliged: mortgage and auto debts spread more widely and deeply throughout the U.S. population. Credit cards were newly promoted to consumers who filled millions of wallets with many of them. Toward the end of the 20th century, capital added massive student lending that now exceeds total U.S. credit card debt. Capital thereby supplemented its profits from production (boosted by stagnant wages) by adding interest on consumer and student debts (undertaken because of stagnant wages). No wonder the U.S. stock market boomed in the 1980s and 1990s. No wonder that the Clintons and other centrist Democrats celebrated that debt boom for their political advantage instead of attending to its immense risks and disruptive social costs.

Late 20th-century U.S. capitalism boomed until it could no longer support rising debt levels. Households stressed, families dissolved, and individuals exhausted by ever more hours of labor added severe anxieties to their burdens as rising debts exceeded capacities to service them. Deepening loneliness, divorce, opioid and other addictions, and suicides were among the social costs. Three crashes of U.S. capitalism in the 21st century (2000, 2008, and 2020), each far worse than its predecessor, brought home to the U.S. working class how far its social situation had deteriorated. Individual responses no longer sufficed for millions. They were ready to participate in social movements to express their accumulated anger, bitterness, and rage. They needed such populist movements to do something—or at least to support politicians—to reverse the downward economic and social spiral so many felt trapped in and by.

Donald Trump opportunistically tapped enough of the U.S. working class's bitterness to swing the votes needed to win the presidency in 2016. However, the interconnected finances and ideologies of the centrist Democrats who had taken over the party after the 1970s shared with Republicans the responsibility for that bitterness. They led the Democratic Party into increasing dependence on donations from the capitalist class. They likewise drifted ever further from the working-class base that had rallied for the Democrats during the Great Depression of the 1930s. The neoliberal turn in U.S. capitalism under Ronald Reagan had two key impacts on the U.S. working class. First, neoliberalism endorsed capitalist globalization and the export of jobs—especially the better-paying, more-unionized jobs—after the 1970s. Second, by accelerating the deregulation of industries and markets, neoliberalism facilitated automation and weakened or removed various labor protections. In short, the neoliberal turn was and remains a major cause of the U.S. working class's decline and its resulting bitterness and anger.

With progressive leaders, Democrats might have shown the working class that its distress followed from how capitalism functions. Capital flows to where the profits are greatest (where wages are far lower and regulations far fewer than in the United States, for example). Capitalists fund politicians like Reagan to turn policies toward neoliberalism. However, centrists in the Democratic Party shied away from such explanations. The centrist leaders of the Democratic Party were those closest to the party's capitalist donors (and vice versa). Centrist control of the party blocked it from offering a powerful voice to mobilize working-class opposition to neoliberal job exports, deregulations, attacks on unions, etc. The centrists wanted and depended on capitalists' donations; that dependence only increased as the party's working-class support ebbed.

Workers turned away first from activity in and for the Democratic Party; eventually many stopped voting for its candidates. For them, the Democratic Party had failed to advance beyond the New Deal's achievements. Worse, the party had failed even to protect workers against the multiple ways that neoliberalism undid the New Deal. Many workers felt betrayed. In protest, often unspoken, some began to cross over to vote Republican. Unions increasingly had to downplay or reduce their traditional links to the Democratic Party because growing portions of their members had shifted toward the GOP.

The Republicans, traditionally the employers' party, had long tried to counter the Democratic Party's appeal to workers as the traditional employees' party. Republicans dared not use economic issues, and so they used religion, regionalism, and racism. They could pry portions of the working class away from the Democratic Party by appealing to such noneconomic concerns among workers. Their prime targets included evangelical Christian and other religious fundamentalists portrayed as victims of secularists, the South's and other regions' sense of unfair treatment by Washington and coastal elites, and white supremacists portrayed as threatened by rising Black and Brown populations including immigrants.

The centrist Democrats countered by trying to carve out other portions of the working class: women, Black and Brown people, immigrants, and various other minorities. Trump went further than previous Republicans in prying workers away from the Democrats. Joe Biden went further than previous Democrats (including Barack Obama) in focusing his campaign and his new administration on those portions of the working class Democrats prioritized. In these ways, each party's strategy provoked more extreme versions of the other party's strategy. Hence the increasingly harsh and rageful tones of major party discourse and behavior generally.

Both major parties, following the dictates of the Cold War, together eviscerated the class-based politics stressed from the 1930s to 1945. An integral part of the undoing of the New Deal was canceling a politics where Republicans confronted Democrats as representatives of employers versus employees. Instead, class conflict quickly faded from both parties' statements and thinking. They focused instead on carving up the same working class into different, competing portions. Employers are chief funders of both parties, who then limit themselves to minimal references to class issues except for occasional, fleeting campaign rhetoric.

However, the class silence of the major parties created the need and the opportunity for a revival of what they had repressed. Progressives such as Bernie Sanders, Alexandria Ocasio-Cortez, and a growing number of others across U.S. politics are riding the wave of protest against all that was lost when centrists took over the Democratic Party. That takeover presumed the undoing of the New Deal, the repression of the strong communist and socialist parties built in the 1930s and early 1940s, and the neoliberal turn that came to dominate public policy. Many (not all) of today's progressives—inside and outside the Democratic Party—want to reconstruct U.S. politics as once again a class politics.

Both major parties are now stuck with their commitments to a system that has failed spectacularly. Private and public sectors were unprepared for and could not contain a deadly virus handled far more successfully in many other countries. U.S. capitalism likewise failed to prepare for or contain the social damage from the latest in its regularly recurring cyclical crashes. These new failures compounded earlier, ongoing failures to overcome global warming and the crisis of U.S. race relations. These and other systemic failures are eroding mass support for those parties just as the mounting sufferings of the working class seek political expression and solutions.

Trump's right-wing Republicanism solved none of the United States' basic economic problems; it did worsen income and wealth inequalities. Yet it spoke to millions of working-class people who feel betrayed by the Democrats and attracted by the usual Republican references to religion, region, and race. Obama's regime had likewise solved nothing in the United States' basic economic problems while worsening income and wealth inequalities and barely overcoming the 2008 capitalist crash in ways that set up the next one. Obama did speak to millions of working-class people gathered around issues of gender, race, ethnicity, and sexual orientation. Biden gives every sign—in conditions of even worse economic and political decline—of repeating these oscillating failures. In so doing, he prepares the way for the next Trump.

The key question then revolves around progressives inside and outside the Democratic Party. Do enough of them have the needed clarity of understanding, courage to act, and wisdom to see their deficit in terms of strong organization? Can those who do seize the opportunity to ride a return of class politics into U.S. society? Will they effectively resist both major parties' efforts to silence and destroy them? Meanwhile, the establishment Democrats and Republicans will continue their oscillating failures as the U.S. system's mode of decline.