Under attack for its response to the coronavirus pandemic, OSHA is playing catch-up 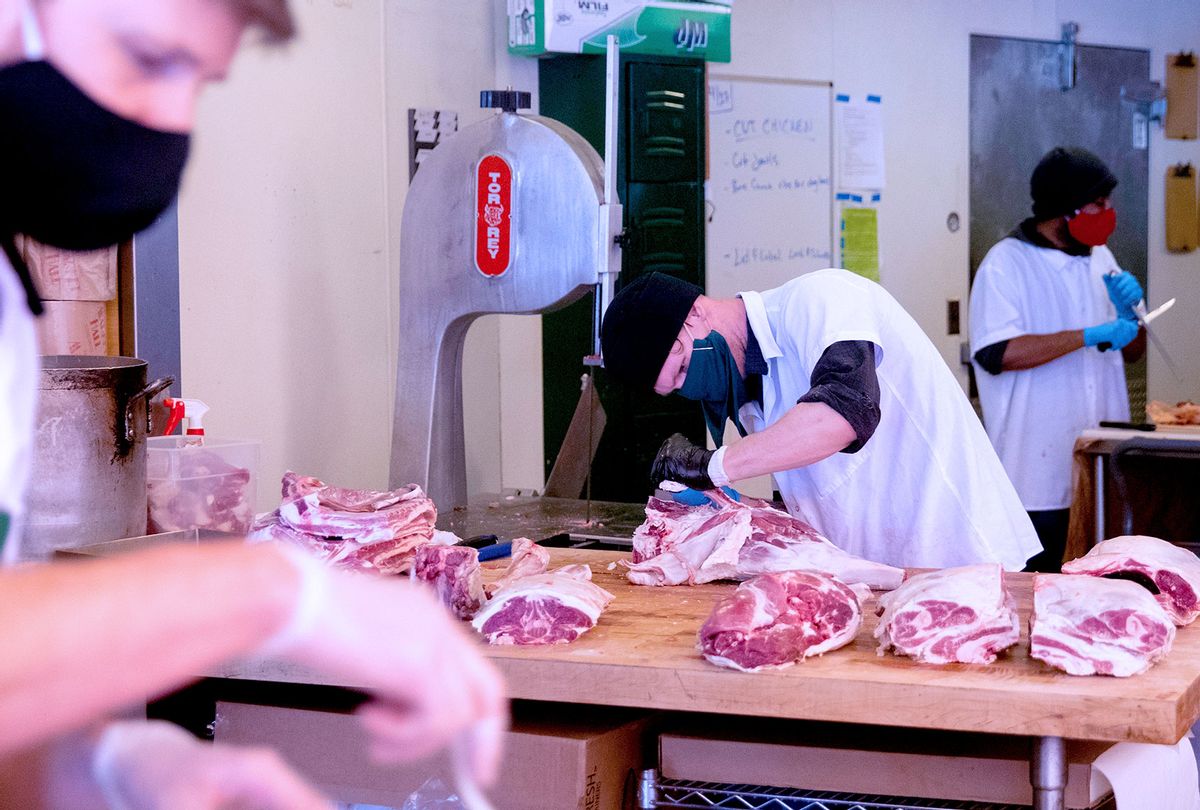 A butcher wears a mask and gloves as he works to deconstruct a lamb while at Marin Sun Farms Butcher Shop in Oakland, Calif. Wednesday, April 29, 2020. (Jessica Christian/The San Francisco Chronicle via Getty Images)
--

In the early days of the coronavirus pandemic, infections began spreading at the JBS USA beef processing plant in Grand Island, Nebraska, the area's largest employer with 3,500 workers. On April 3, a worried employee called federal regulators at the Occupational Safety and Health Administration, complaining that despite the outbreak the plant was not practicing social distancing.

OSHA made note of the call, but closed the case without visiting the plant, agency records show. Within three weeks, coronavirus cases at the plant grew exponentially, to 237 by April 21.  But OSHA didn't conduct an inspection until May 12, in keeping with the requirement to investigate whenever a worker dies or at least three are hospitalized. OSHA records indicate that the case is open.

In the first months of the pandemic, OSHA drew scathing criticism for a hands-off approach to a crisis that was claiming  the lives of many hundreds of essential workers, including meatpackers. More recently,  OSHA began ramping up enforcement activity. As of  November 26, the agency had levied $3.4 million in proposed fines against 255 employers that failed coronavirus-related inspections, according to an OSHA press release.  The inspections and fines mark a significant bump from early September, when OSHA had cited no more than a handful of employers

Despite the burst of activity, a FairWarning review of OSHA inspections shows that the regulators are mostly responding to deaths or hospitalizations, as required by law, rather than flagging unsafe conditions before more workers get infected. More than 200 out of a total of 317 inspections  were in response to reports of a worker dying, or at least three getting hospitalized, according to FairWarning's review. A high percentage of the inspections were at hospitals, clinics, nursing homes and other long-term care centers, and more than half were in New York or New Jersey, where most coronavirus deaths occurred in the first months of the pandemic.

There is no official count of suspected deaths from Covid contracted in the workplace, and some workers who died could have been infected somewhere else. But National Nurses United, a union, says that as of mid-September 1,718 healthcare workers had died from Covid-19. Hundreds more deaths have been reported by groups representing meatpackers and transit, retail and grocery workers.

Critics say OSHA is not working to prevent workplace outbreaks before they occur.

"It's all reactive–following deaths," said Debbie Berkowitz, a former chief of staff and senior advisor for OSHA during the Obama administration,  who now heads the worker health and safety program for the National Employment Law Project, an advocacy group.

In a statement, OSHA said any suggestion that it is not protecting workers from COVID is "patently false." According to the statement, "OSHA continues to investigate every complaint about workplace safety, and has done so in over 12,000 COVID-19 related complaints this year."

OSHA regulates job safety in about half the states. The rest run their own job safety programs under agreements with OSHA. OSHA's count of citations and penalties does not include actions by those states.

As reported by FairWarning, the number of OSHA inspectors has fallen to record lows  under the Trump administration, which has also left key positions unfilled. "The anti-regulatory bent of this administration has resulted in unnecessary death and misery for people," said Ryan Talbott, a staff attorney with the Center for Food Safety, one of several groups that petitioned OSHA  to adopt temporary emergency standards to protect workers from the coronavirus.

OSHA has so far offered  guidance on preventing the spread of infection, but argues that its existing rules  are sufficient to protect workers from COVID risks.

Among those, the agency said, is a general duty clause requiring employers to keep workplaces "free from recognized hazards that are causing or likely to cause death or serious physical harm."

Fourteen states have gone further than OSHA by issuing COVID-specific regulations, according to the National Employment Law Project. Among them are Virginia, Oregon and California, where Cal/OSHA on December 1 implemented a new set of emergency regulations meant to protect farmworkers and others who have been most affected.

Advocates say that a piecemeal, state-by-state approach is far less effective than standardized federal rules specific to Covid. "These [California] regulations set up a good standard to reduce transmission, but I don't think that's going to be enough," said Susana Matias, a UC Berkeley researcher who has studied Covid-19 outbreaks among farmworkers in the state. Among other concerns, she worries that subcontractors who recruit immigrants to work at farms may escape scrutiny under the new California rules.

Berkowitz, the former OSHA official, said that the agency's decision not to issue an emergency standard, and "of doing almost no enforcement until very close to the election, has contributed to the spread of COVID-19 and has resulted in…workers dying ."