The latest film, about a boy fascinated with astronomy, is the most autobiographical to filmmaker Steve McQueen 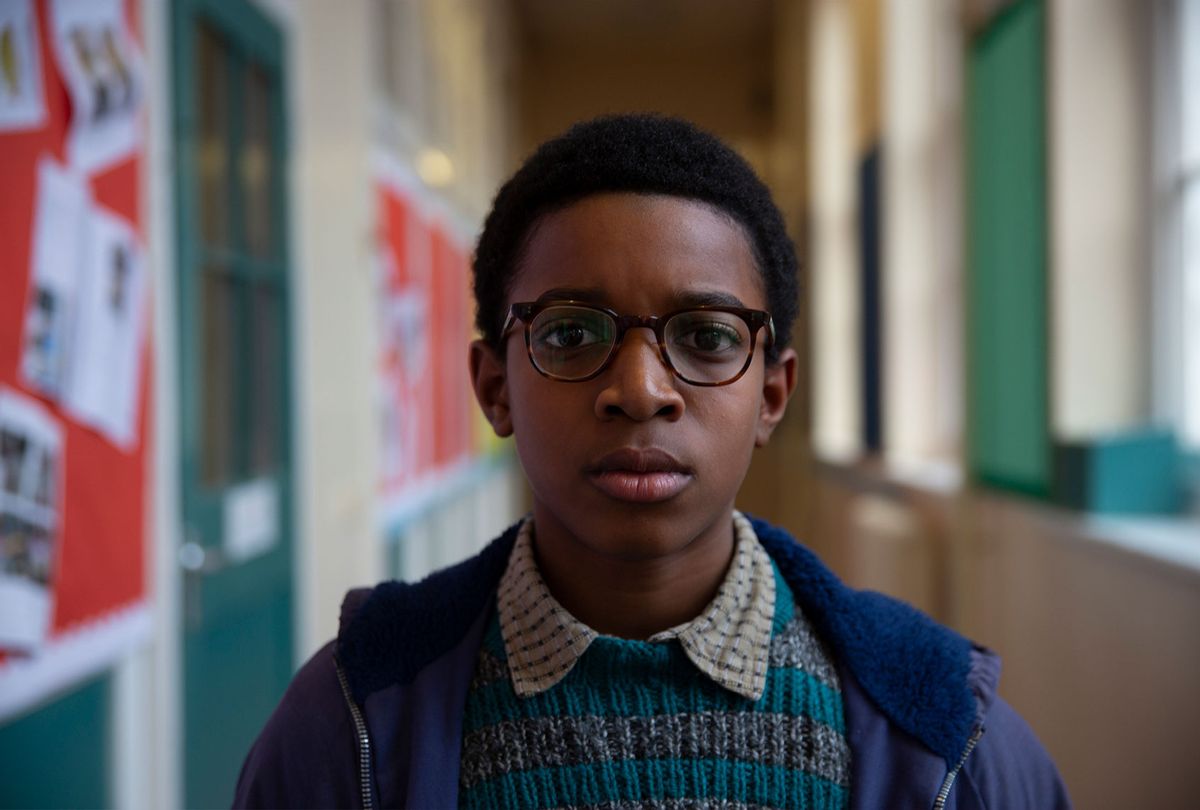 Elements of "Education," the fifth installment of Steve McQueen's Amazon Prime "Small Axe" film anthology series, could have played as comedy if the circumstances weren't tragic. One scene places its main character Kingsley (Kenyah Sandy) in a room with what will be one of his classmates at the school to which he's been transferred, a big-eyed girl wearing a vacant expression who communicates by barking like a dog.

Later a teacher clumsily strums his guitar as he sings "House of the Rising Sun" off-key, eyes pinched closed, as his students deflate at their desks. This performance masquerades as a lesson since at the end of this criminal display, he asks the children who wrote the song. Of course they don't know. "The Animals," he says sagely, repeating it so they'll remember.

But this is not a goofy blip in an otherwise upbeat coming-of-age tale. It's the story of how bright children like Kingsley, a boy fascinated by astronomy and rockets, are written off early in their lives. Before he is shunted from his original school to one for "special" students, one of his white friends informs him that his dream to become an astronaut is impossible since Black people aren't allowed to go to space.

We also learn that despite attending school he has somehow gotten to the age of 12 without anyone realizing or caring that he can't read. His teachers punish his illiteracy as bad behavior, and when he acts out the headmaster exiles him to what his mother later is informed is a school for "educationally subnormal" students. In reality, it is a waystation for children to mature into adults whose options are more likely to be limited to menial labor or worse.

Out of the five films McQueen created for "Small Axe," "Education" is his most autobiographically inspired. McQueen, a first generation West Londoner whose parents immigrated from Caribbean nations, lived parts of Kingley's experience himself and grew up in a community where the stories told here took place.

"Education" also is a thoughtful summary of all the themes that came before it, capping off an anthology that explores with ample consideration how to evoke aspects of the Black experience without tearing at old wounds or afflicting anew the people who live that experience.

How and which stories about Black life rise to prominence in mainstream culture is a discussion that's been running for decades, but this charnel house of a year gave it new life. McQueen's anthology is the product of a vanguard of Black filmmakers and producers who have attained levels of power and prominence previously all but unknown in the industry and larger culture. Through "Small Axe" and works like it, they are steadily evolving our stories from ones eternally linked to suffering or overcoming to those defined by excellence and audacious joy in the face of struggle.

McQueen's hybrid of serialized story and independent film captures a slice of Black West Indian experience in London between the late 1960s and 1980s, and in doing this he inventively acknowledges the balancing act between the struggle and exhilaration that must be reckoned with in these stories.

One is necessary, invigorating and the backbone of inspirational storytelling. There can be no progress or reckoning with injustice without honestly depicting struggle. The other is a choice people make to keep going in the face of grim adversity. Neglecting to explore this gives the viewer little reason to witness that struggle beyond the lesson of it; there must be, should be, the counterbalancing representation of felicity, and in large doses.

In each of "Small Axe" films McQueen consciously engages with this notion, even within the true stories that would not be famous if not for the violence committed against those at their center. "Mangrove," the first film in the series, takes its name from a Notting Hill Caribbean restaurant whose owner made it to be a home away from home for locals. To Americans, the neighborhood is synonymous with Hugh Grant and Julia Roberts and the colorful sort of artsy that arrives in the wake of gentrification.

Here we see how it looks and feels in the 1970s – a place where Mangrove owner Frank Crichlow (Shaun Parkes) throws animated street parties that inspire dancing and music, where the restaurant itself is made lively by warm family banter about the food and gossip about the activism stirring the community. The Mangrove is more commonly associated with a famous trial involving Frank and eight others, including activists Altheia Jones-LeCointe (Letitia Wright) and Darcus Howe (Malachi Kirby). All were targeted by the local cops, wrongfully arrested and charged with incitement to riot after they mounted a protest against police harassment.

The violence that London police commit against the people in multiple scenes is infuriating. Distinguishing it from other such dramatizations, however, is the way that McQueen and his co-writer Alastair Siddons transform that agitation into a hot battery powering Kirby's magnificent closing argument at the film's climax.

Where this represents a departure from other such stories is McQueen's willingness to steep us in the delectation of this story and his devotion to ensuring that does not take a backseat to struggle. This is most obvious in "Lovers Rock," a fictional sway through a house party in 1980.

In this installment, a young woman named Martha (Amarah-Jae St. Aubyn) and her friend Patty (Shaniqua Okwok) sneak out of their houses to take part, and the camera accompanies them and everyone else from the pre-game preparations on through the night, imbuing the smallest details with import and thrill. (I defy anyone ever burned by a hot comb to hold back a simultaneous grin and cringe while watching Martha's roommate take one to her head and hearing the sizzle as her steaming curls surrender to its sear.) That feeling is a star character unseen but perceived and it seizes the film's focus when the ladies at the party dance and sing along to "Silly Games," Janet Kay's 1979 banger about desire and yearning.

The best house party anthems mainline those sensations until they take over the dance, thus creating the film's gorgeous crown of a scene: the DJ plays Kay's single, then fades it out as everyone present makes their own melody by stepping and singing along, hitting the high notes and whooping when they do.

McQueen could have presented this as the backdrop to some other narrative-forwarding action. Instead he deliciously lingers in this magic for what you may wish were an eternity. The energy shifts throughout the night as it does with all house parties, and there's a tense, threatening departure from the vibe coaxed into fullness here, but the story returns us to the relief of the safety and bliss of celebration with sure footing.

Such house parties were common, by the way, because white London nightclubs shunned Black people. But "Lovers Rock" isn't presented as a reaction to society but an extension of the welcoming world within it. As in "Mangrove," you may wish to be transported into these moments, to live in them.

These films and the other two in the series, the biographically inspired "Red, White and Blue" starring John Boyega and "Alex Wheatle," which tells part of the award-winning author's life story (as portrayed by Sheyi Cole), build to the summarizing purpose of the final "Small Axe" installment, "Education." I do not mean to short those other two films on their merits – and indeed, Boyega's performance is one of his best – but in their respective ways they tells stories that ring familiar in this conversation's context.

"Red, White and Blue" presents Boyega as Leroy Logan, a research scientist who leaves his profession to join the police force in 1983 after a pair of cops brutalize his father. The film lays bare Logan's many experiences with discrimination from his white peers and being shunned by his own community, which deems him a traitor. This also is a story about the fraught journey any well-intentioned person faces when attempting to change a corrupt system from within.

McQueen chooses to end the story prior to Logan's ascent to become superintendent of London Metropolitan Police, and in the same way ends the depiction of Wheatle's early years spent in an uncaring foster care system and stint in prison before he embarks upon the writing career that would make him a known name.

Each is a fine piece, although "Red, White and Blue" is far and away the stronger of the two owing to the storytelling tension between Logan's choice and the taxing slog his father endures in his interaction with the British justice system that lays charges upon him for a crime he didn't commit.

While these films aren't devoid of profound uplift, they draw from the too-typical source of endurance as their influence. But we have to absorb them to appreciate "Education" as a proportional amalgam of all of the emotions. "Education" may closely resemble McQueen's experience but Kingsley represents all Black kids growing up in educational systems that antagonize children like him, if they don't write them off entirely.

Quickly, though, "Education" takes on a delicate optimism when a woman (Naomi Ackie) shows up to the school, takes note of the children who are attending and reaches out to parents, including Kingsley's mother, to alert them about their kids' mistreatment, offering supplementary educational options the community created in response.

This is where "Education" harvests its main dramatic tension since Kingsley's mother Agnes (Sharlene Whyte) is wary of going against the system that is on her neck for fear of what will happen to her son, while his older sister (Tamara Lawrance), who has ambitious dreams of her own, sees the brightness in her brother. For a time Kingsley's future rests on the few pages of a pamphlet and the question of whether it gets into the right hands.

And the gladness arrives in a scene where a teacher who cares instructs students that the rest of the world chooses to ignore over a breakfast table laden with sausage and eggs, transforming a feast into an opportunity learn and grow.

Via this moment and other intimate scenes McQueen wields "Small Axe" as a bright instrument that opens a path to partaking in a state of being, not merely understanding, of celebrating instead of memorializing history through pain and sorrow. Those are parts of the whole as much as they are in any people's history, in any life. But the joy he shows here is specific, and it's that joy that keeps us moving.