Many became familiar with the Tarahumara tribe in the book "Born to Run." In this doc, they tell their own story 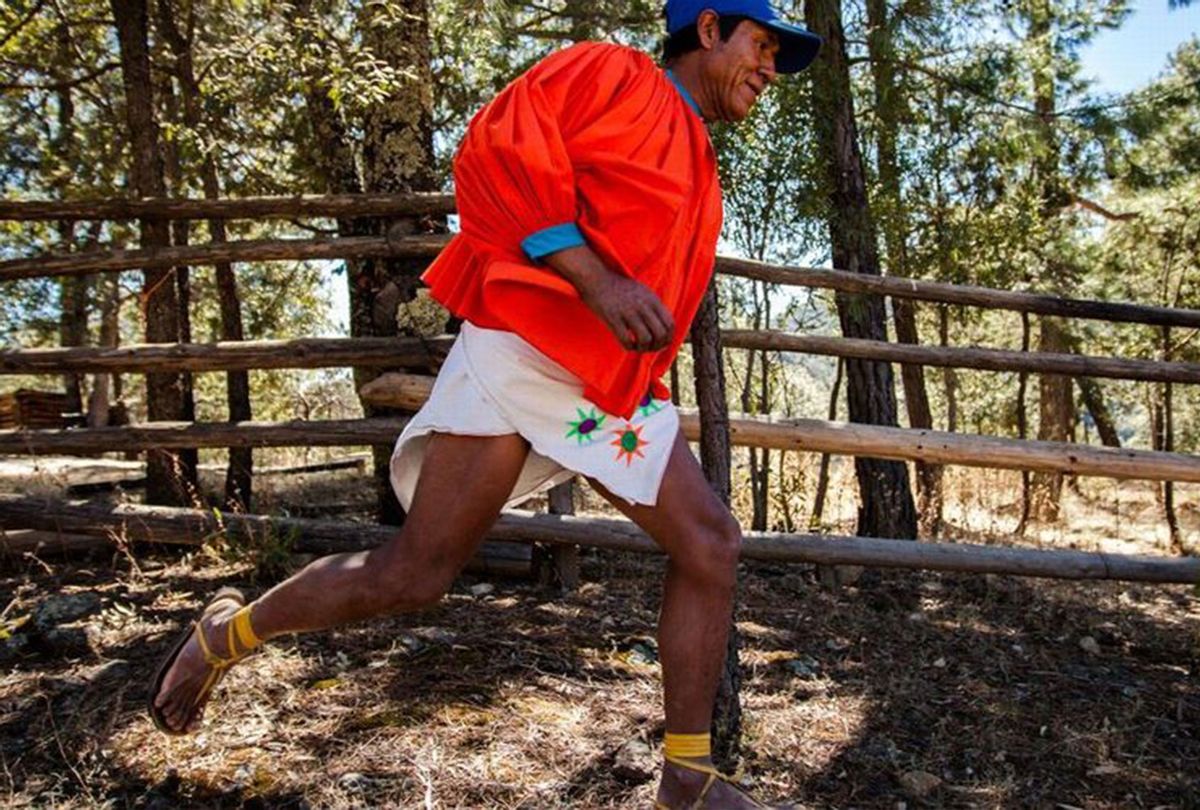 In 2013, Vibram — the company that manufactures the FiveFingers "barefoot shoes" — settled a class action suit led by consumers who alleged that the company "deceived customers by advertising that the footwear could reduce foot injuries and strengthen foot muscles, without basing those assertions on any scientific merit."

This was following the heyday of the "barefoot running" trend. You may remember it: Some runners eschewed modern footwear to run in minimalist shoes or completely barefoot because they perceived it as being more in line with the way our bodies were naturally meant to move. It was a small, but significant, fringe group within the sport and it caught a lot of media attention.

Publications ran profiles on athletes like Rick Roeber, who had run more than 50 marathons barefoot. In 2009, the Barefoot Runners Society was founded as a national club and its membership doubled within a year to nearly 1,500 members; that year the New York City Marathon reported an uptick in barefoot participants.

Some analysts connected the trend to a cultural movement towards minimalism following the recession, as well as shifts in spending patterns (the current average list price of a pair of running shoes is around $121, so why not ditch that cost entirely?). But what really catapulted the movement into the mainstream was the release of Christopher McDougall's 2009 book, "Born to Run: A Hidden Tribe, Superathletes, and the Greatest Race the World Has Never Seen."

McDougall's best-selling book explored the lives of the Tarahumaras, an Indigenous community who live in Chihuahua, Mexico and are known for what some have described as a superhuman ability to run distances of over 100 miles regularly, often while barefoot or in flimsy sandals. Alongside his ethnological research of the Tarahumaras, McDougall asserted that modern cushioned running shoes were a major cause of running injury.

Thus began a multi-year romanticization of the Tarahumaras, who also call themselves the Rarámuri, within the running community. People ditched their running shoes. Articles with headlines like "4 Secrets of the Tarahumara That Will Improve Your Running" and "How to Run WIth Perfect Form Like the Tarahumara Tribe – Posture, Breathing and Footstrike Explained" began popping up. International athletes flocked to Mexico to run alongside the Rarámuri in the annual Ultra Maraton Caballo Blanco—named after American ultrarunner Micah True, who was a central figure in McDougall's book.

But for many people, the fascination with the Rarámuri was just a trend, much like the popularity of Vibram's FiveFingers, especially once drug cartel violence infiltrated their community. This is where director Bernardo Ruiz's ESPN 30 for 30 documentary, "The Infinite Race," picks up, delving into the sometimes murky lines that emerge between championing a community and the superficial fetishization of ancient, indigenous practices.

"The Infinite Race" begins, fittingly, during a run. Here, viewers are introduced to Silvino Cubesare, who says, "When I was young, I had many dreams. I always wanted to be a runner. We Tarahumara are born with a gift."

But, as Ruiz establishes over the next hour, it's not a one-dimensional gift that should be reduced to training programs and fad workouts. The Rarámuri have lived a purposely isolated life since they first literally ran into the mountains to escape Spanish conquistador rule. They lived separate from modern Mexican society and, until recently, tourist visitors.

Rarámuri communities were separated by miles of challenging terrain. Running was both a necessity for connection, and a deep part of their heritage. Irma Chávez, a Tarahumara activist, explains that the Rarámuri had traditional games; the men's version, called rarajipari, involves repeatedly kicking and chasing a wooden ball over long distances, while the women's equivalent, ariweta, involves running with a stick and a hoop. Both games traditionally lasted for days and many miles.

Both Chávez and Cubesare are skeptical of why a runner who could actually afford shoes would run without. "I don't know what they're thinking," Cubesare says. "Why do they want to run barefoot? I think they are crazy."

Chávez, in particular, views the barefoot running trend as a clear example of corporations profiting off misconceptions about the Tarahumara. They don't run barefoot for performance enhancement, she says, but because most Rarámuri communities are deeply impoverished due to drought, famine and cartel violence.

The top prize for the Ultra Maraton Caballo Blanco? Sure, there's money, but there are also vouchers for corn. Many Rarámuri, like Chávez, don't view ultramarathon competitions as part of their heritage, but they participate because they are desperately in need.

Through Ruiz's lens, we see that these are the hard truths that often get overshadowed when Indigenous communities are painted by outsiders as romanticized ideals instead of real, modern people. This was a point that indigenous writer Kelly Anderson made in her "Spring's least-wanted fashion trend: The co-opting of Aboriginal dress."

She pointed to the litany of instances of Native imagery being presented without context. In 2012, No Doubt released their "Looking Hot" video — and subsequently pulled it after fans objected to Gwen Stefani writing around in a provocative buckskin outfit and headdress. Several weeks later, Victoria's Secret model Karlie Kloss walked down the runway in a  bikini and full headdress — even though the headdress is revered and intended for respected leaders, not for use as a fashion accessory.

And while last year many musical festivals across the country finally banned attendees from wearing Native American-style headdress, "Sexy Indian" outfits, with names like "PocaHottie," still appear on costume shop shelves. It's like, Anderson said, Indigenous populations are like a fairy tale to some people, and are presented as such in mainstream markets.

"When society only sees us as the images you presented, it means that our modern issues of poverty don't exist; nor do our modern efforts like schooling and economic development through sovereignty and nation building," explained Keene. "We have sophisticated tribal governments and communities, but how will we be able to be seen as modern, successful people if we are continually represented through plastic tomahawks and feathers?"

This misguided fetishization takes place in more subtle ways, too, like through the appropriation of Native rituals as New Age self-help or wellness trends or, in the case of the Rarámuri, the unthinking influx of tourism for their annual race without actually supporting the community.

In 2015, the organizers of the Caballo Blanco ultramarathon were forced to cancel the event the night before it was to be held after multiple incidents broke out during the lead-up to the race. This was a decision made unilaterally by non-local organizers, and foreign runners evacuated as quickly as possible, though a substitute race was held in the municipality of Urique.

"I didn't see the face of a single foreign runner," Cecilia Villalobos, Urique's former director of tourism, told Ruiz. "And I thought, how ironic. Where are all those folks who support the Tarahumaras?"

This decision also called into question whether the promised food vouchers would be available for the winners of the abbreviated race. While the tourists could simply leave the race behind, some of the Rarámuri were counting on it for survival.

This is the story that "The Infinite Race" lays bare. It strips away the decades-long myth of the Tarahumaras being almost superhuman and gives them the opportunity to finally tell their own story without glossing over the historic trials they have and continue to face. For them, running isn't about the competition or reaching peak performance capacity. It's a way of life, a tradition and a key to survival.

Chávez sums it up like this: "Running is our resistance to imposition."

"The Infinite Race" is available to watch on ESPN online with a valid cable subscription starting Dec. 16.