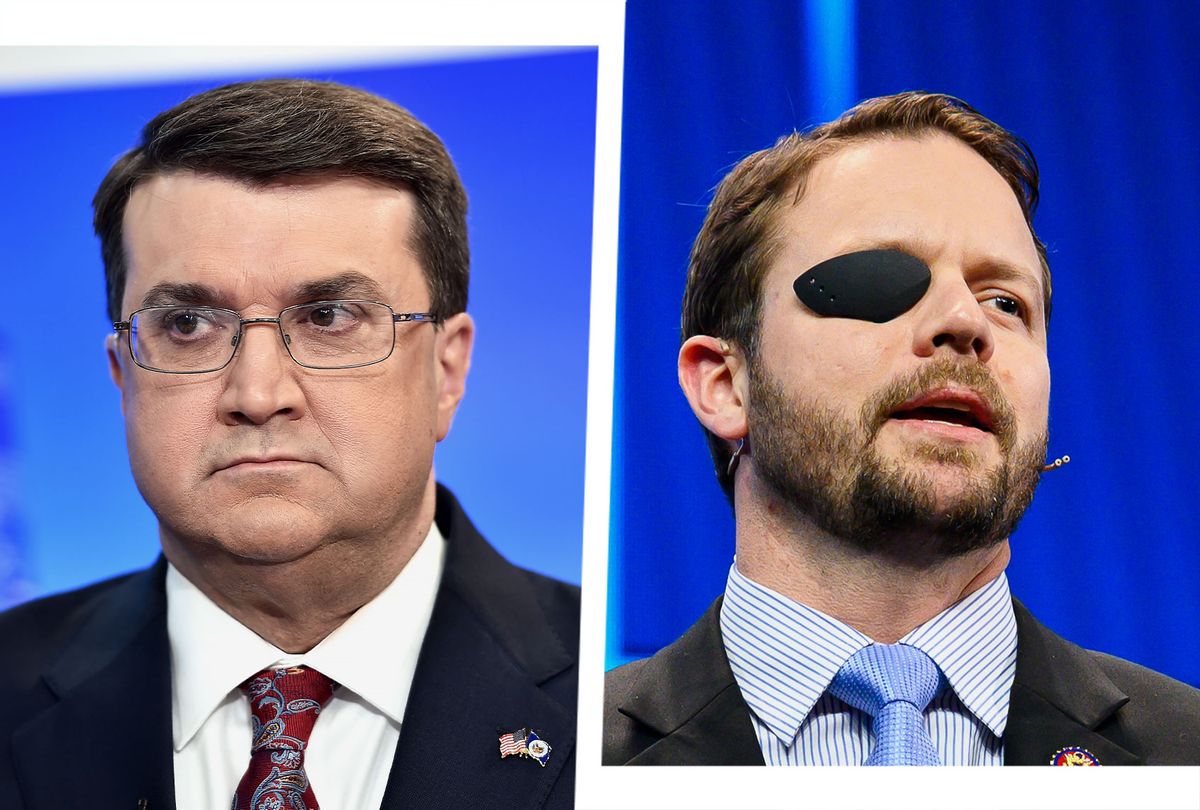 A government accountability watchdog group filed a complaint with the House Ethics Committee on Tuesday, demanding Rep. Dan Crenshaw, R-Tx., be expelled from Congress for his alleged role in what a federal investigator described as a concerted effort on the part of top Veterans Affairs officials to smear a sexual assault victim.

The complaint, filed by the Campaign for Accountability (CfA), draws on a recent report from the VA Office of Inspector General (OIG) describing efforts at the highest levels of the agency to undermine the department's probe into a woman's allegation that a contractor had assaulted her in a VA hospital. The report outlines a number of "troubling" issues, including allegations that VA Secretary Robert Wilkie disparaged the woman after personally looking into her background.

According to the report, Crenshaw told Wilkie that Andrea Goldstein, a former Democratic congressional staffer and Navy veteran who served in Crenshaw's unit, frequently made frivolous complaints. Goldstein and her legal counsel rejected that claim in testimony to the OIG, while Crenshaw's office refused to cooperate with investigators.

"It is shocking that Representative Crenshaw would defame a fellow Navy veteran and employee of one of his colleagues in an attempt to interfere in a sexual assault investigation," CfA Executive Director Michelle Kuppersmith told Salon in a statement. "His conduct and his colleague's lack of reaction are a black mark on the important work done in recent years by activists, Congress, the military, and the Department of Veterans Affairs to combat sexual assault in the military. Representative Crenshaw's actions described by Inspector General report appear so egregious that the House ethics committee should recommend his expulsion from Congress."

House rules require the chamber to deal with members who commit "flagrant" ethical violations that reflect poorly on "Congress as a whole." The CfA's complaint points out that the Ethics Committee has enforced this a number of times, including with failures to report campaign contributions, accepting gifts in exchange for legislative favors and making false statements. In a 2017 memo, the committee emphasized that the House should apply the rule in cases of sexual harassment and discrimination against congressional staff.

On Monday, Rep. Jackie Speier, D-Calif., also called on her colleagues to investigate.

"Rep. Crenshaw's alleged involvement is abhorrent. If true, Rep. Crenshaw fed false information to Sec. Wilkie in order to help vilify a victim & impugn her character," Speier wrote on Twitter. "The Ethics Committee must launch an investigation into these claims."

Goldstein, who once worked for House Veterans Affairs Committee chair Mike Takano, D-Calif., claimed in 2019 that while she waited in a VA hospital, a department contractor "bumped his entire body against mine and told me I looked like I needed a smile and a good time."

Takano called for a department investigation, however, the report describes that senior VA officials showed an "unusual level of engagement" for a criminal investigation. Testimony from current and former VA officials indicated that Wilkie had looked into Goldstein himself almost immediately after she filed her complaint, and personally disparaged her several times to top staff.

Wilkie and Crenshaw had spoken about Goldstein at a fundraiser. The OIG cites an email Wilkie sent to two top aides immediately after the event, saying, "Ask me in the morning what Congressman Crenshaw said about the Takano staffer whose glamor (sic) shot was in the New York Times."

The secretary later acknowledged the conversation to investigators but claimed that the Texas Republican merely said that he had served with Goldstein. Asked why that benign observation prompted the email, Wilkie simply replied: "Well, I don't remember. I have no idea."

One VA official testified that Crenshaw "might have said something to the fact that [Goldstein] made allegations in the military," and another claimed that Wilkie had said Crenshaw told him about the alleged past complaints.

Goldstein, who told the OIG that Crenshaw's claim was false, said that she had filed one harassment claim when she served, which an investigation substantiated and later led to disciplinary action against the perpetrator. Although Crenshaw did not cooperate with the OIG, in an earlier interview with ProPublica he did deny that he and Wilkie ever even discussed Goldstein — directly contradicting the Secretary's testimony.

The secretary also speculated in an email that Takano requested the investigation because the HVAC chair was "laying the grounds for a spectacle," according to the IG's report, and VA department staff expressed suspicion of Goldstein's claim due to her specific work regarding sexual assault issues for Takano's office. After the investigation, Wilkie sent Takano a letter falsely claiming that the investigation into Goldstein found her claims were "unsubstantiated."

This violated the OIG's explicit directions to VA staff not to comment on the merits of the accusation. The OIG also reminded Wilkie that his investigation had not reached that conclusion: "Neither I nor my staff told you or anyone else at the Department that the allegations were unsubstantiated."

The secretary denied all accusations against him, but despite the fact that the OIG found his testimony "incomplete or incorrect," investigators could not clear up the contradictions because Wilkie declined a follow-up interview, and others — including Crenshaw — would not cooperate. While the OIG could not prove wrongdoing, the report concluded that the Secretary and senior officials showed "a lack of genuine commitment" that jeopardized a "safe and welcoming environment" for victims of sexual assault.

"The tone set by Secretary Wilkie was at minimum unprofessional and at worst provided the basis for senior officials to put out information to national reporters to question the credibility and background of the veteran who filed the sexual assault complaint," the OIG wrote, adding that the conduct would "appear to undermine VA's stated goals of providing a safe and welcoming environment for all veterans and to treat complainants of sexual assault with respect."