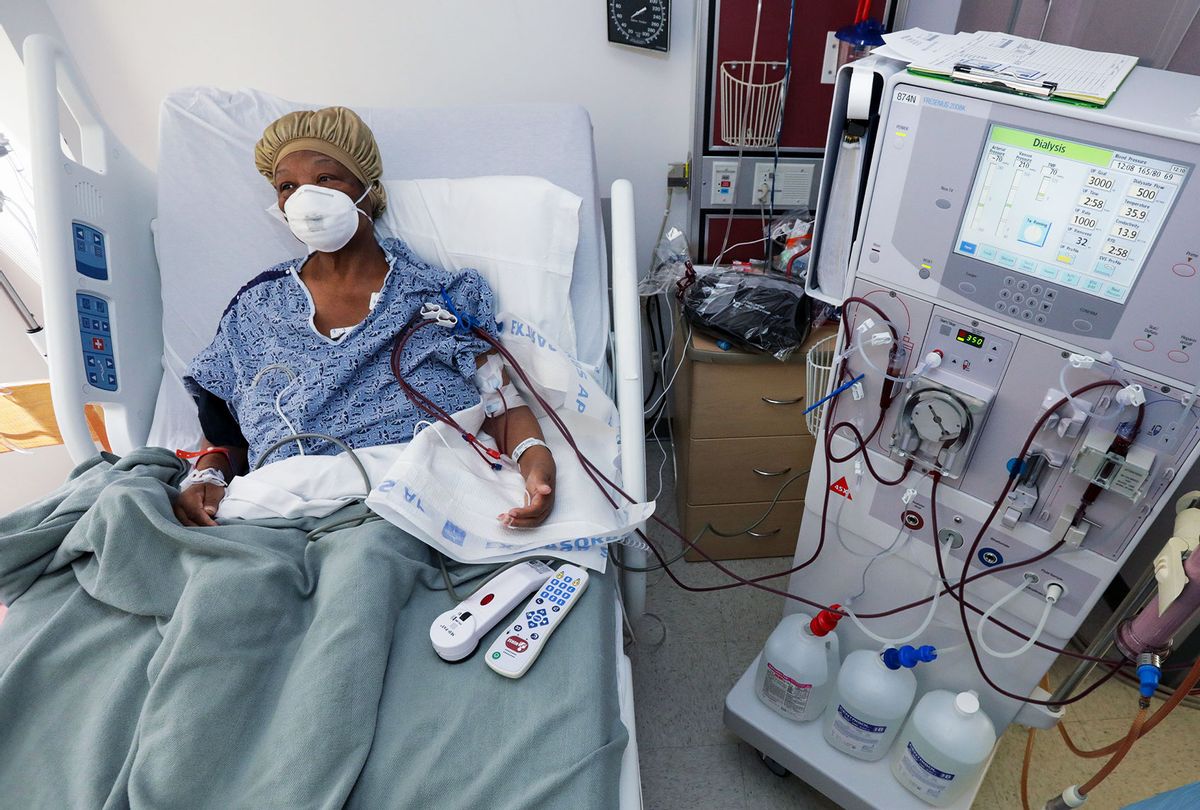 SACRAMENTO — The nation's dialysis industry has poured $233 million into California campaigns over the past four years, establishing its leading companies as a formidable political force eager to protect their bottom line and influence state policy.

Most of the money the industry spent from Jan. 1, 2017, through Nov. 30, 2020, funded the defeat of two union-backed ballot measures that would have regulated dialysis clinics — and eaten into their profits. But the companies and their trade association also stepped up their offense, dedicating about $16.4 million to lobbying and political contributions during the same period, a California Healthline analysis of state campaign finance records shows.

Nearly every member of the legislature, Democratic Gov. Gavin Newsom and his predecessor, former Gov. Jerry Brown, the Democratic and Republican parties, and dozens of political campaigns — including some local school board and city council races — received a contribution from a dialysis company.

"These are very large, very profitable companies," said Mark Stephens, founder of Prima Health Analytics, a health economics research and consulting firm. "They have a lot to lose. The fear would be that if some of this stuff passed in California, the union would certainly try to get similar measures on the ballot or in the legislatures in other states. The stakes are higher than just California for them."

California has about 600 dialysis clinics, which are visited by an estimated 80,000 patients each month, typically three times a week. At the clinics, patients are hooked up to machines that filter toxins and remove excess fluid from their blood because their kidneys can no longer do the job.

Medicare, which covers most dialysis patients, pays a base rate of $239.33 for each dialysis treatment.

DaVita was responsible for about $143 million — or more than three-fifths — of the political spending in the past four years, and Fresenius gave about $68 million.

Until four years ago, the dialysis industry's political spending was relatively modest compared with that of the hospital, physician and other health care associations so well known in Sacramento. In those days, dialysis lobbyists focused on regulatory issues and health care reimbursement rates, and companies gave minimal campaign contributions.

The industry's transformation into one of the biggest spenders in California politics began in 2017, the first of four years in which it faced ballot or legislative threats. In 2017, a Democratic lawmaker introduced a bill that would have set strict staff ratios at dialysis clinics. The bill, SB-349, which failed, had faced opposition from the California Hospital Association, the California Chamber of Commerce and the dialysis industry.

The SEIU-United Healthcare Workers West union (SEIU-UHW) followed the next year with Proposition 8, a ballot initiative that would have capped industry profits.

DaVita and Fresenius were forced to defend their huge profits and allegations of subpar patient care, turning the competitors into allies — at least in politics.

The industry spent $111 million to successfully defeat the measure, breaking the record for spending by one side on an initiative.

"I think it's very natural for these private chains to spend millions to make billions of profits," said Ryan McDevitt, associate professor of economics at Duke University. "They're lobbying to protect their profits."

Last year, the industry fought AB-290, a bill that aimed to stop a billing practice dialysis companies use to get higher insurance reimbursements for some low-income patients. But the legislature wasn't swayed, and Newsom signed the bill into law, which is now tied up in federal court.

And this year, the industry spent $105 million to block Proposition 23, which would have required every clinic have a physician on site and institute other patient safety protocols.

Kent Thiry, the former chairman and CEO of DaVita, said the industry had no choice but to spend heavily to defeat the ballot measures, which he said would have increased costs and harmed patient care.

"When someone does that, you have to use some of your money to defend yourself, your patients and your teammates," Thiry said in an interview with KHN, which publishes California Healthline. "It forces companies to allocate precious resources to do something that never should have been brought up to start with."

In an emailed statement, DaVita said it would continue to work to "educate lawmakers and defend against policy measures that are harmful to our patients." Fresenius also defended its advocacy, saying the company needs to protect itself against special interests intent on abusing the political system. The company will "continue to support legislation that improves access to quality care and improves patient outcomes," said Brad Puffer, a company spokesperson.

By comparison, SEIU-UHW, which sponsored the ballot measures, spent about $25 million to advocate for the initiatives, and $7.8 million on lobbying and political contributions. The union lobbies lawmakers on a wide array of health care issues

From defense to offense

While most of dialysis companies' political spending in California has been used to defeat ballot measures, several of the largest companies also dedicated about $16.4 million to lobbying and political contributions over the past four years.

The companies and their trade association, the California Dialysis Council, put almost three-fourths of that — nearly $12 million — into hiring veteran lobbyists to advocate for dialysis companies when lawmakers consider legislation that could affect the industry.

For instance, when Newsom took office in 2019, both DaVita and Fresenius added Axiom Advisors to their lobbying teams, paying it $737,500 since then. One of the firm's partners is Newsom's longtime friend Jason Kinney, whose close relationship with the governor was highlighted by the recent French Laundry dinner fiasco. Newsom came under intense criticism for attending the early November dinner at the exclusive restaurant, held to celebrate Kinney's birthday, because he and his administration were asking Californians not to gather.

The industry has also given at least $4.6 million in contributions to political candidates and committees, both directly and to entities on behalf of a lawmaker or candidate.

All but five state senators and Assembly members who served during the 2019-20 legislative session received a direct contribution from at least one of the companies or the California Dialysis Council.

"They're spreading it out. They're doing the full gambit," said Bob Stern, former general counsel for the California Fair Political Practices Commission, which enforces state political campaign and lobbying laws.

State law limits how much a company or person can give to a political candidate in an election, but there are legal loopholes that allow individuals and corporate interests to give more. The dialysis industry has taken advantage of them.

Under state campaign finance rules, lawmakers can accept only $4,700 from any one person or company per election.

But some lawmakers operate "ballot measure committees" so they can accept unlimited contributions. These committees are supposed to advocate for a ballot measure, but lawmakers often use them to pay for political consultants and marketing, and to contribute to state and local initiatives they support. Candidates can also get unlimited help from donors who independently pay for campaign costs, such as mailings and digital campaign ads.

For instance, DaVita chipped in $93,505 to help pay for a direct mail campaign on behalf of state Sen. Steve Glazer, D-Orinda, in this year's primary election. Glazer also received $55,600 from DaVita, Fresenius and the California Dialysis Council in contributions to himself and his ballot committee, Citizens for a Better California.

In some cases, lawmakers such as Glazer who netted some of the biggest contributions from dialysis companies voted with the industry. That was the case last year when the legislature approved AB-290, the bill limiting the dialysis billing practice.

Glazer voted no, as did Assembly member Adam Gray, D-Merced, whose Valley Solutions ballot measure committee had received $112,500 from DaVita and Fresenius since 2017. Gray also received $36,900 in direct contributions from Fresenius, DaVita and U.S. Renal Care.

Gray issued a statement saying campaign contributions play "zero role" in how he represents his district. Glazer did not respond to a request for comment.

Assembly member Reggie Jones-Sawyer's 84-year-old mother is on dialysis. The Los Angeles Democrat and SEIU-UHW member has called for improved staffing ratios at dialysis clinics and has voted repeatedly to regulate them.

DaVita wrote a $249,000 check in October to a political committee supporting Jones-Sawyer's opponent, Efren Martinez, another Democrat, but one the industry considered more friendly. DaVita followed up with a $15,000 check the week before the election.

Jones-Sawyer, who won the race, said he's frustrated dialysis companies aren't willing to make changes to improve patient safety on their own, saying it would cost them far less than the nearly quarter-billion dollars they have spent on political contributions. So for now, he said, he will continue to push to improve conditions at dialysis clinics from the Capitol, despite the industry's growing political clout.

"I think dialysis is saying, 'Look, we can be the 800-pound gorilla now,'" Sawyer said. "It's not just influence for a day; it's longevity."

Rae Ellen Bichell and Elizabeth Lucas of KHN contributed to this report.

Among the ways dialysis companies exert influence on the political process is by contributing money to campaigns; hiring lobbyists; and paying for advertising and marketing on behalf of candidates.

Lobbying: We created a spreadsheet of expenses reported on lobbying disclosure forms, also available on the secretary of state's website, by DaVita, Fresenius, U.S. Renal Care, Satellite Healthcare and the California Dialysis Council. We found details about how much the industry paid lobbying firms, what agencies it lobbied and which bills it tracked.

Political contributions: DaVita, Fresenius, U.S. Renal Care and the California Dialysis Council made direct contributions to more than 100 candidates, which we compiled from the secretary of state's website. DaVita and Fresenius made other contributions, often large, to Democratic and Republican committees, and ballot measure committees led by lawmakers. The two companies also made contributions known as "independent expenditures" that benefited candidates' campaigns and "behested payments," which are donations to nonprofit organizations and charities in lawmakers' names. Behested payments are disclosed on the California Fair Political Practices Commission website.

The SEIU-United Healthcare Workers West union uses two political committees for its giving. Its PAC contributes mostly to lawmakers and county and state Democratic parties while its Issues Committee gives to local hospital ballot measures. We did not tally spending for local hospital ballot measures for this story, but we did include contributions made by the Issues Committee to the California Democratic Party, which helps state lawmakers.