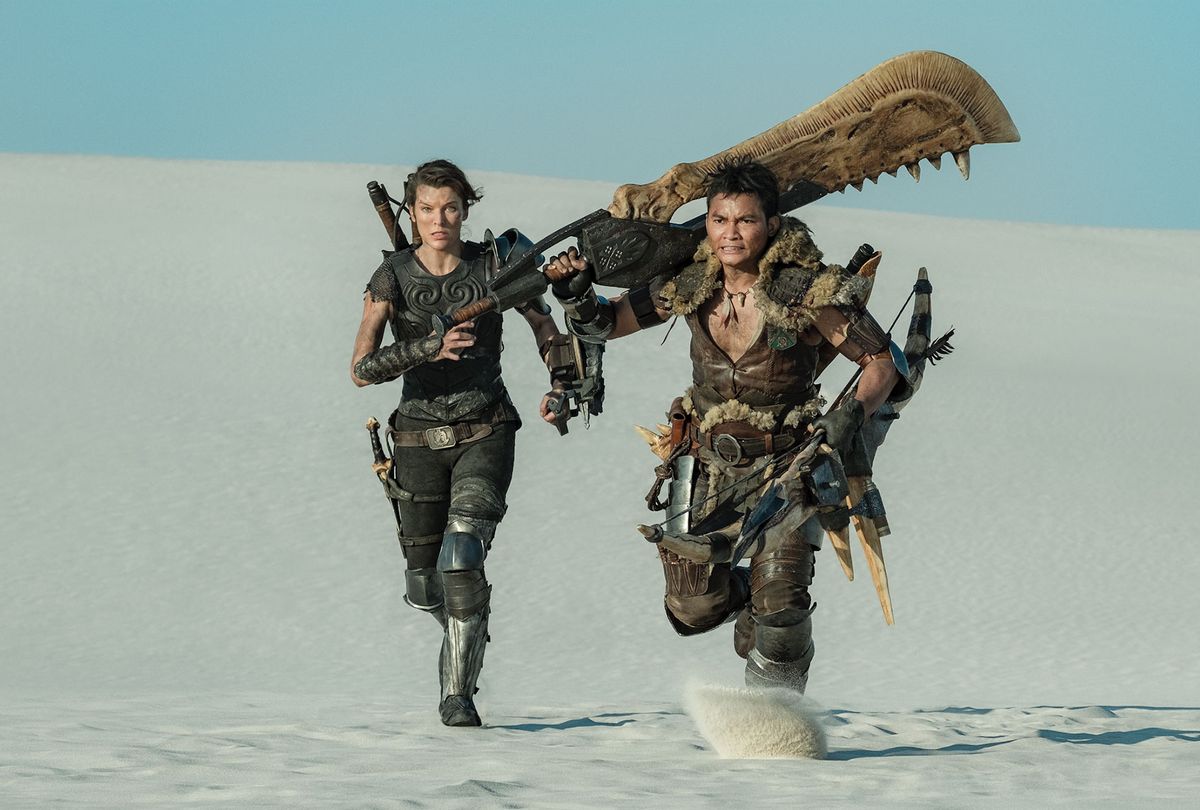 The opening few minutes of Paul W.S. Anderson's "Monster Hunter" are such a delightful eruption of unfettered, goofy-ass, who-cares-what-your-parents-think nerdcore that it seems as if the director of 1995's "Mortal Kombat" (and the "Resident Evil" series after that) has reset video game movies back to the good old days when they weren't bogged down by delusions of respectability — when they were memorably bad instead of just dull or "Assassin's Creed." If only.

The "Monster Hunter" franchise, which might be helpful for neophytes to think of as the Pepsi to Pokémon's Coke, has always stood out for its high fantasy trappings, and boy oh boy does Anderson embrace those in a big way right out of the gate. We open on a hilariously self-important quote about "new worlds" that are hidden "behind the perception of our senses" as Paul Haslinger's glitch-pop score blares in the background, and that's an excellent start. Cut to: A galleon ship full of sand pirates cutting through a vast desert in the dead of night as a giant subterranean worm of some kind is hot on their tail. Hell yeah.

And it only gets better from there — one of the brigands aboard the boat is Ron Perlman, the "Pottersville" star rocking a leather vest and an anime haircut as he plays a "Monster Hunter" mainstay known as Admiral (imagine someone rolled Sabretooth and Cloud Strife into 300 pounds of tenderized meat and you'll get a sense of what this looks like). Admiral's best friends? That's right: "Ong-Bak" ass-kicker Tony Jaa and a giant, ginsu knife-wielding cat known as a "Meowscular Chef." Jaa falls overboard, the music swirls around the title card in a maelstrom of hot synth action, and the 2099 Oscar season steels itself for the "Mank" that someone will inevitably write about the making of the Chinese-American co-production that brought the globe's two biggest superpowers together even as tensions between them grew strained on the world stage.

Alas, some hidden worlds should have stayed behind the perception of our senses, and Paul W.S. Anderson — an occasionally form-bending filmmaker who's never met a beloved franchise that he couldn't militarize beyond all interest or recognition — sucks any trace of life out of the "Monster Hunter" series the moment his movie exchanges the cartoon sand pirates of its campy prologue in favor of some generic soldier types on our side of the dimensional rift.

From that point on, "Monster Hunter" is relentlessly terrible even by 2020 standards, as it quickly descends into a dull and colorless bit of bug-hunting that marries the production value of a SyFy Original with the scale of a tutorial level, resulting in one of the drabbest and least imaginative video game movies ever made. Series fans will feel cheated by such a chintzy and incurious take on something they love, while the rest of us will be left wondering how the source material earned itself any fans in the first place.

Milla Jovovich, the director's wife and long-time muse, takes over in the newly invented role of Captain Natalie Artemis, a no-nonsense, no-personality U.S. Army Ranger in charge of a UN military team so bland they make the average video game NPC feel like Chekhov characters by comparison. For all of the unique energy that the likes of Clifford "T.I." Harris Jr., Meagan Good, Diego Boneta, and Jin Au-Yeung (aka MC Jin) bring to the screen, these trigger-happy redshirts don't share a decent line of dialogue between them (a certain joke has been excised from the film's American release after causing a, uh, bit of an uproar in China, though the fact that it made the cut in the first place is a pretty damning indicator of Anderson's meathead sense of humor).

The good news is that none of these characters are long for this world, and not only because they soon get swept up in an electrical storm that spirits them into Monster Hunter land or whatever it's called — it's the same stretch of South African desert, but the roads have been replaced by massive, hard-shelled bugs that feed on people and plant larvae in their guts (T.I.'s hilarious death scene is poised to have a long second life on social media). "Monster Hunter" fans may delight at the idea of seeing live-action Black Diablos, but it's hard to imagine that even the most dedicated enthusiasts will be overjoyed to see how the iconic beast has been rendered with all the artistry of "Eight-Legged Freaks," and made to look like what might happen if Zuul from "Ghostbusters" ever mated with the mean triceratops boss from the TV show "Dinosaurs."

It's tempting to forgive the uninspired creature design (along with the lifeless action scene during which it comes to the fore) in the heat of the moment, as viewers naturally assume that Black Diablos will be just one of many different monsters featured in this blockbuster adaptation of a video game series that contains hundreds upon hundreds of them. Not so fast. Aside from the "Starship Troopers"-like Nerscylla, the Black Diablos is all we get until deep into the second act, as the entire first hour of "Monster Hunter" is entirely, inexplicably devoted to the tentative alliance that forms between Artemis and the titular Monster Hunter (Jaa) who rescues her amidst the sand.

These two characters don't speak the same language — all the excuse that Anderson needs to paint the Hunter as a useful idiot — but they'll only make it across the desert if they work together. The hour that follows essentially feels like watching two cosplayers suffer through a corporate team-building exercise as the film around them takes great pains to mute the talents of its stars. Jovovich doesn't get anything to do besides leap, grimace, and stare longingly at an engagement ring that never becomes relevant in any way whatsoever.

As for Jaa, he's afforded a small handful of scattered chances to show off his gifts as a martial artist — just enough that even people who've never seen his previous work will be able to recognize the extent to which he's been wasted here. There are screenshots from the "Monster Hunter" games that are more exciting than anything that Anderson has Jovovich and Jaa do together. Here's one. Here's another. Look at those colors! The movie only gives us yellow and green. It's such a relief when a splash of green shows up after 66 minutes that this critic made a point of marking the time in his notes.

The cat chef and its sand pirate friends inevitably return for a climactic fight against the giant wyvern that guards the tower that connects the two worlds, but the movie is too drunk on the darkness of its CGI sludge to bother ornamenting these characters with things like motives, or personalities, or names, or any of the other highfalutin college terms that pretentious film critics have been using to slander video game movies for decades. Perlman's character mercifully teases some kind of mythology — he learned English as a lark, and totes around some weathered maps that we hope might lead to a better film — but Anderson is only interested in the physical collision between the story's two worlds.

If the third act kicks off with a dark and stormy "Mortal Kombat" vibe that feels like a throwback to a time when video game movies got most of their atmosphere from bad weather and worse costumes, it soon becomes clear that Anderson is just trying to cross the streams and contrive a way for the wyvern to fight a military plane. Anderson is palpably excited at the idea of using monsters to humble our faith in modern technology, but the Hunter and his pals never wield their signature weapons — giant bows, giant swords, giant bow-swords, etc. — in a way that offers a reasonable alternative to machine guns.

And while the best moments of the final battle come perilously close to being watchable (cruddy special effects and all), the story around is so gallingly hollow that it feels like something between a slap in the face and a self-own when "Monster Hunter" ends with its heroes rushing towards a fight with the biggest, coolest beast we've seen yet. Not since Paul Giamatti's immortal cameo as the Rhino at the end of "The Amazing Spider-Man 2" has a film this bad tried this hard to whet our appetites for more. In this case, it's impossible to fathom how a "Monster Hunter" movie could have given us any less. How fitting that a movie made without any imagination whatsoever should end by defying our own.