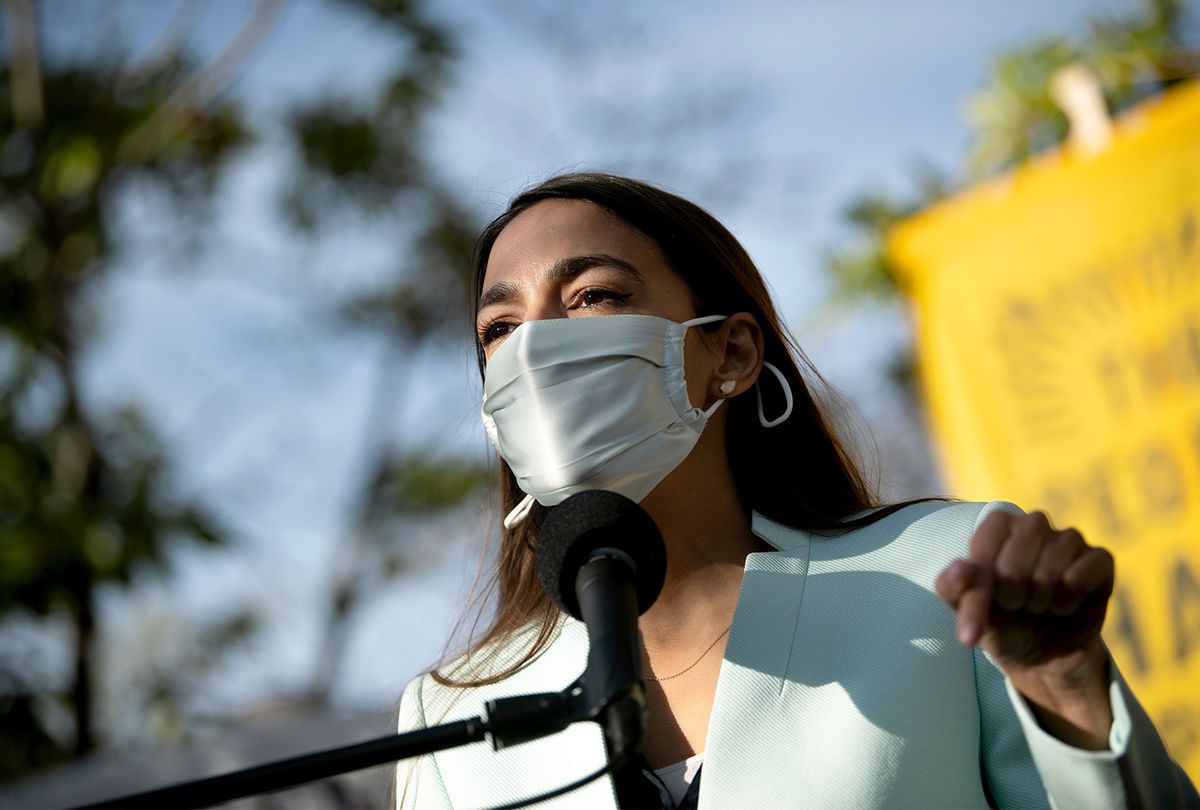 Rep. Alexandria Ocasio-Cortez, D-N.Y., voiced frustration on Sunday with what she characterized as Democratic leaders' efforts to shut progressives out of key policy negotiations, a message that came as the details of a roughly $900 billion coronavirus relief package began to slowly trickle out just ahead of an expected vote.

"One major difference between GOP and Dems is that [Republicans] leverage their right flank to gain policy concessions and generate enthusiasm, while Dems lock their left flank in the basement [because] they think that will make Republicans be nicer to them," the New York Democrat tweeted, referencing Republican leaders' decision to rally around a last-minute push by Sen. Pat Toomey, R-Pa., to curtail the Federal Reserve's emergency lending powers in the relief bill.

Toomey's original provision — which Democrats slammed as an effort to sabotage the incoming Biden administration — was narrowed significantly in negotiations late Saturday, but the Pennsylvania Republican said Sunday that he is "very pleased" with the outcome.

Under the compromise agreement, according to the Wall Street Journal, "$429 billion previously provided to the Treasury Department to backstop losses in Fed lending programs would be revoked, and the Fed wouldn't be able to replicate identical emergency lending programs next year without congressional approval. But the agreement wouldn't prevent the Fed from starting other similar programs."

As negotiations over much-needed coronavirus relief accelerated rapidly over the past week, Ocasio-Cortez and other progressives publicly aired their outrage at the exclusion of key priorities and the overall inadequacy of the package, which will ultimately be much smaller than even the pared-back version of the HEROES Act that the House passed in October. The total size of that package was around $2.2 trillion.

The relief legislation that is expected to be unveiled and potentially passed Sunday includes $600 direct payments and a $300 weekly boost to unemployment benefits — both significantly smaller than what Democratic leaders have supported in the past. Progressive lawmakers have continued pushing in recent days for direct payments of at least $1,200 per adult — a proposal supported by 88% of likely voters — and an unemployment boost of $600 a week.

As talks progressed toward the finish line Sunday, the Washington Post reported that "consensus has settled on $600 stimulus checks, which would begin to be reduced at $75,000 a year income level, similar to the last round of stimulus checks. ... And Congress would also extend unemployment benefits of up to $300 per week, which could start as early as Dec. 27."

The final legislation is also expected to include billions for vaccine distribution, rental assistance and nutrition aid.

While noting that progressives succeeded in getting direct payments back on the negotiating table, Ocasio-Cortez said Friday that a one-time check of $600 is "not enough."

"We want $1,200 at least. And Republicans are fighting it back down to $600, which is really unfortunate," said the New York Democrat. "We need to really make sure that we hold the Republican Party accountable for cutting people's stimulus checks in half."

Rep. Ayanna Pressley, D-Mass., also criticized the size of the direct payments, saying in an interview Sunday that "the truth of the matter is $600 will not even cover a month's rent."

Rep. Ilhan Omar, D-Minn., expressed alarm that with a potential vote just hours away, she had not yet seen any legislative text.

"Still not a peep on language. It will probably be another multi-billion-dollar bill, without real debate, floor amendments, introduced and passed probably within hours," Omar tweeted. "No time for the public input or objections. What a complete nightmarish example of representative democracy."

Last week, as Common Dreams reported, Omar said it is "really quite shameful that we find ourselves negotiating a deal with such a small amount of money when we know just how devastated the American people are across our country.

"Think about it: In March, we were able to send $1,200 checks to people and give them $600 in unemployment insurance benefits," Omar said. "And now we're talking about possibly sending a one-time check, eight months later, of $600 and reducing that unemployment benefit to $300."

Republican leaders and members of the Trump administration, meanwhile, are reportedly satisfied with the success they've had in pulling Democratic leaders down from their initial demand for a multi-trillion-dollar relief package, which economists say is necessary to pull the U.S. economy out of deep recession and provide adequate help to desperate Americans.

While the final package is not expected to include any form of liability shield for businesses — a Republican priority — it will also exclude additional aid to crisis-ravaged state and local governments.

"I couldn't be more pleased where we landed this," Treasury Secretary Steve Mnuchin reportedly said during a Republican conference call on Sunday.