Allergic reactions to Pfizer vaccine may have been caused by additive, not mRNA itself 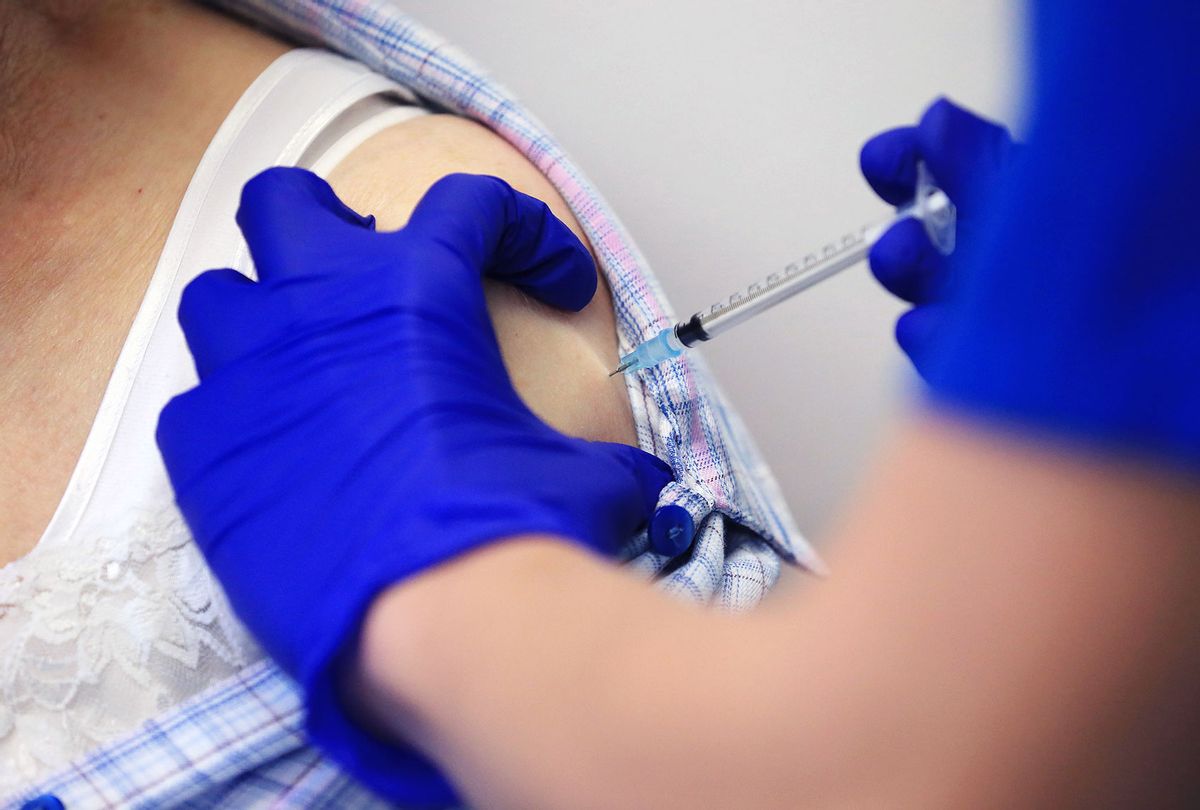 Nurse Practitioner Terri Welch administers a dose of the Pfizer-BioNTech Covid-19 vaccine to a patient at the Haxby and Wigginton Group Medical Practice in Haxby, northern England on December 22, 2020. (LINDSEY PARNABY/AFP via Getty Images)
--

Last week, a healthcare worker at Bartlett Regional Hospital in Juneau, Alaska, sat down to receive the first dose of the Pfizer/BioNTech vaccine. As protocol would have it, the middle-aged woman had to be monitored for 15 minutes after receiving the shot. At the ten minute mark, according to the New York Times, she started to have symptoms of an anaphylactic reaction, which can be potentially life-threatening.

The healthcare worker reportedly began to experience shortness of breath as a rash spread all over her face and torso. Naturally, an elevated heart rate followed. At first, she received a shot of epinephrine and her symptoms subsided—but not for long. The symptoms returned and she was moved to the intensive care unit, where she stayed for at least two nights. According to a recent presentation by the U.S. Centers for Disease Control and Prevention (CDC), as of December 19th, this unnamed healthcare worker is one of six anaphylaxis cases among the 272,001 people who have received the COVID-19 vaccine in the United States.

Medical experts have been emphasizing that severe allergic reactions to vaccines are rare, but they can happen.

"This is something that we see with vaccines," Amesh Adalja, a senior scholar at Johns Hopkins Center for Health Security, told Salon in an interview. "The key thing is is that when you get the vaccination you're in a place where people are going to watch you to make sure that that doesn't occur."

Adalja added: "If you're somebody that has a prescription for an epi-pen, or has had allergies to injectables in the past, meaning that you've received an injection or something and had an allergic reaction, you should talk to your doctor about getting the vaccine and should be much more wary about how quickly you get up from the site of vaccination."

The Pfizer vaccine is a relatively new type of vaccine that relies on synthetic messenger RNA. When a person receives the first shot of the vaccine, a bespoke version of synthetic messenger RNA (mRNA) is injected into the body, which causes cells to produce proteins that resemble the spike-shaped proteins that line the SARS-CoV-2 virus. The immune system learns to recognize the spike, which means it will know to attack a real version of the coronavirus if it should enter the body. The second dose of vaccine that is administered three weeks later is akin to a booster.

According to a report in Science magazine, it might not be the vaccine itself that is causing these rare, albeit severe, allergic reactions, but instead a common chemical compound called polyethylene glycol which is attached to the lipid nanoparticles on which the mRNA hitches a ride — essentially, the packaging used to carry the mRNA to the human body. Polyethylene glycol has never been used before in an approved vaccine, but it is found in many drugs and some everyday products. The report in Science states that some experts are growing suspicious that previous exposure to polyethylene glycol could put patients at risk of an anaphylactic reaction to the vaccine, because they've already built up antibodies against it. They cite a 2015 study that suggests 7 percent of people have enough anti–polyethylene glycol antibodies that could predispose them to anaphylactic reactions.

But not everyone agrees with this connection.

"If it is polyethylene glycol, we should see pretty much a similar reaction with the Moderna vaccine," Adalja said, noting it also has PEG in it.

Sharon Castillo, a spokesperson for Pfizer, told Salon in an email that the company is looking into "all the details" of the reports from Alaska (a second healthcare worker had an allergic reaction, too).

"We will closely monitor all reports suggestive of serious allergic reactions following vaccination and update labeling language if needed," Castillo said. "The prescribing information has a clear warning/precaution that appropriate medical treatment and supervision should always be readily available in case of a rare anaphylactic event following the administration of the vaccine."

Castillo added that participants in their Phase 3 trial were excluded if they had a history of severe adverse reactions associated with a vaccine. Pregnant women and children under the age of 16 were also excluded.

"Overall, there were no safety signals of concern identified in our clinical trials, including no signal of serious allergic reactions associated with the vaccine," Castillo said. "However, reports of adverse events outside of clinical studies are a very important component to our pharmacovigilance activities."

The National Institute of Allergy and Infectious Diseases (NIAID) is setting up a study in collaboration with the Food and Drug Administration (FDA) to further examine the allergic reactions, and a possible link to PEG.

Adalja emphasized the importance of not worrying about these reports.

"It doesn't decrease my confidence in this vaccine; anytime you have an injection there's going to be some small percentage of the population that has an allergic reaction, and that's something that we've been preparing for," Adalja said.