Best of 2020: Marriage in the time of coronavirus

Our 2020 retrospective continues with this essay set in Seattle’s first outbreak, in the early days of the pandemic 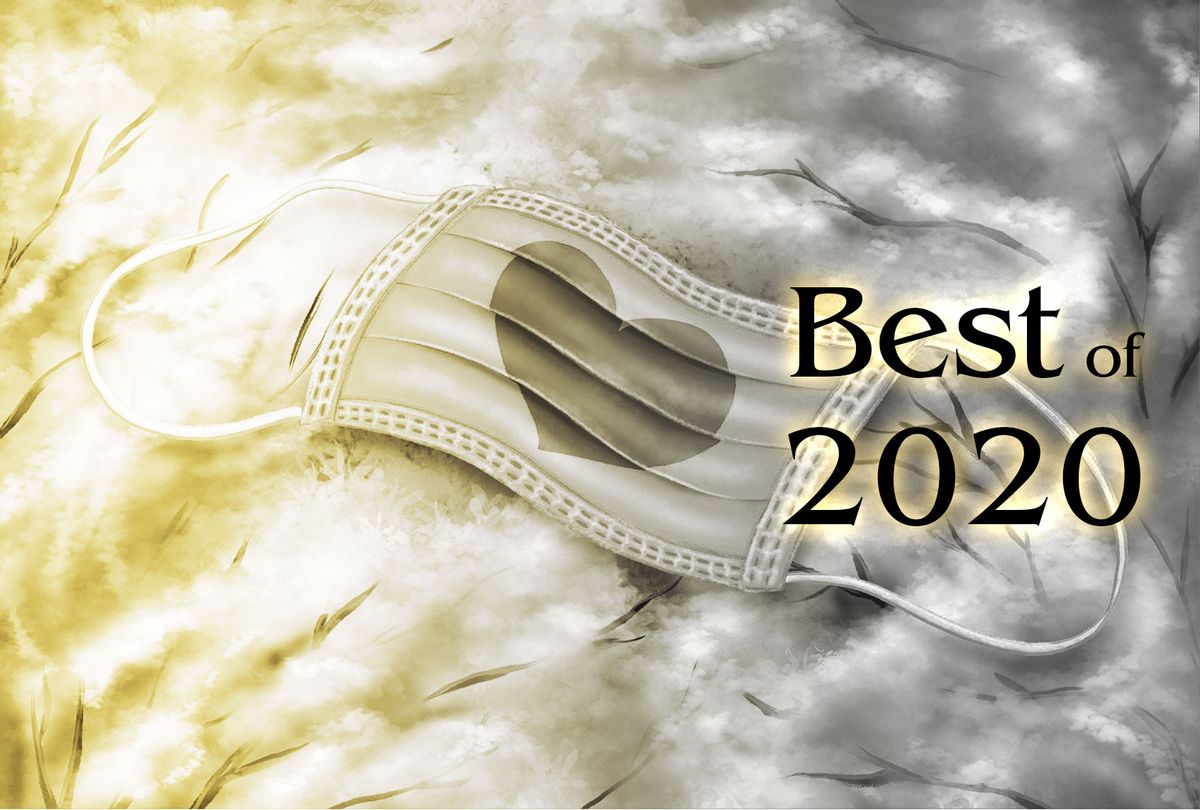 This essay was originally published in Salon on March 14, 2020. We're revisiting Salon's Best Life Stories of 2020 now through the end of the year. Read more Best of 2020 here.

When the first news of the novel coronavirus COVID-19 came out from China, I was concerned but not overly worried, even though I'm immune-compromised. "Oh, it's no worse than the flu," I remember saying to my husband. Even then, I started thinking about the supply chain of medications from China, how fragile those chains can be, and started checking the refill dates on my prescriptions. We had breakfast and discussed the problem from a scientific point of view; I have a biology degree and my husband one in chemical engineering. "New viruses almost always mutate when they start passing from human to human," I mused to my husband, "Usually to a milder form." We went back to eating fruit and yogurt, my husband drove into his work.

Six weeks later and it's another story entirely. I live a mile from the hospital where nine of the first American patients died of the coronavirus; two miles from the nursing home now considered the epicenter for a wider Seattle outbreak. Amazon, Microsoft, and other tech companies have told their workers to work from home when possible. Schools are closing for not days, but weeks, after students test positive. Grocery stores and drug stores show row after row of empty shelves: first toilet paper, masks and bottled water, then bleach, then vitamins, cold medicine. One Costco even announced on a sign on their door that they were out of Spam. Can you imagine that? I couldn't have, not six weeks ago.

Since I have a genetic immune deficiency and multiple sclerosis, I'm fairly young but still considered a "vulnerable population," so Glenn has taken over all errands that involve other people. We are cleaning the house with bleach — the floors, bathrooms — in fact, our house has never been this clean. I get sick but there are no tests available when I go to the doctor. At this point, of the entire U.S. population only 500 people have been tested.

I was a tech writer before I became a poet, and both careers lend themselves to loneliness, confinement. So many famous writers spent a lot of time by themselves.  A friend of mine tweets: "What would Emily Dickinson Do?" in response to how to pass the time while we're told to "shelter in place," a phrase I've heard for weather emergencies, but never something like this.

My husband is a wonderful cook, and misses going to the markets every day to pick up what's fresh and available. He makes soothing dishes from his midwestern upbringing like beef stew and potatoes au gratin. He drinks a lot of coffee. I am anxious, feeling housebound. I haven't been in the company of other people besides my husband for a week now. The last other person I came in contact with was a doctor; we were both wearing paper masks then.

During times of crisis, relationships are tested. This is probably doubly true when one has a disability, like I do, and even more when they are locked down together in a house, which essentially we are. I read stacks of books at a time. I watch murder mysteries. I text with my friends, all more worried even than I am because the government and media haven't presented much in the way of reassuring facts. "Wash your hands!' Cheerful signs everywhere say. Oh, yeah, soap was gone from the stores last week. Which made me wonder: Did people just now start washing their hands on a regular basis?

I become snippy with my husband for slight mistakes, breaking a dish while putting them away or leaving a pile of his laundry in the path I have to navigate around the house. He is not getting enough sleep. He watches me, takes my temperature, worries about my cough and stomachaches. He makes me tea with honey at least 10 times a day. He is very sweet. We are barely touching, much less kissing or anything else. You would think it would be romantic, being trapped together, but we've been married 25 years, and Glenn is more worried about getting me sick, since he's the one still going out and interacting with the world — picking up supplies, prescriptions, dropping things off at the post office.

We find other ways to take our mind off the anxiety. We deep-clean the house. We do our taxes. I apply for a difficult, complicated grant. My friends in other parts of the country want "reports from the hotspot" and "reports from the epicenter." The death count in my neighborhood, county, city goes from one, to four, to six, to nine in a matter of days. My ER doctor friend in Alaska mentions the whole state of Alaska only has 50 tests for the coronavirus the day I tell her I can't get tested. She also says she can't find masks to buy, that her hospital hasn't received any. At least we're getting international press, so the government can't ignore us forever. Can they?

On a rare sunny day, we walk outside under blooming plum trees, letting the scent wash over us, stepping on wet pink petals, looking up at the corona of sun behind the pink branches of flowers. The Japanese talk about "Sakura Zensen," falling cherry blossoms, a reminder of the beauty of the transitory. It seems like a metaphor for marriage, too. The brightest points in our marriage, the things that brought us closer, were often emergency hospital trips or other crises. Once you have held your partner's hand when they faced a life-threatening illness, which at this point both of us have done for each other, they always seem a little brighter, more beautiful after, more precious. In a week a windstorm will knock all the petals to the wet cement.

My husband and I discuss the power of nature, the idea of a balancing hand, the idea that the earth itself is pissed off at us. We talk about films by Hayao Miyazaki, like "Nausicaä of the Valley of the Wind," "Princess Mononoke," even "Ponyo"; all laden with warnings that the earth will poison and kill humanity when we damage it too much. I am glad my husband and I like the same movies, that we can talk about music without fighting too much.

I think of the coronavirus as an avenging angel, a goddess of death. She sweeps people away with a wave of her hand. Since this virus made the leap from animal to human for the first time, which makes it a "novel" coronavirus (several coronaviruses exist, ranging from severe to the common cold), this metaphor seems apt. But I still maintain that the goddess will become more gentle over time. The first sweep across continents will kill a number of us, people like me with asthma and MS, or older people whose immune systems aren't up to fighting a new threat. But the second sweep, which will probably follow next year, will hopefully be less dangerous. My husband will probably be safe during both waves; he's still in his forties, has no underlying conditions, and has a level of hygiene that would be admirable in a dangerous biochemical weapons lab. I remain vulnerable.

The pair of us try to sleep without waking each other. I wake up in the middle of the night with an asthma attack, he wakes up early to take a phone meeting from work. We eat together at fixed mealtimes, trying to keep as normal a schedule as possible. We both try to get outside at least a little a day, even if we can't keep our normal workout, work or errand routines. We take pictures of birds in the trees across from our house and notice the slow emergence of bulbs in our garden. We dare to hold hands as we point out new blooms to each other.

The beauty of our marriage is in the knowledge of its fragility, its absolute lack of assurances, safety — like the coronavirus itself, no one knows how it will end, and it is ultimately out of our control. Illness, death and the pressures of a possible pandemic aside, I feel lucky as I look at his rumpled blond hair in the morning, the rather odd angles of his face when he sleeps. I turn on the news on mute, see that the government is promising more tests "soon." The school a neighborhood away is closing for three weeks. The price of gasoline is down. Then my husband wakes up, makes me a cup of tea, and we return to the routine of eating, talking news, trying to think up a way to distract ourselves from the apocalyptic conditions around us. I place an order on Amazon for another bunch of electrolyte drinks and off-brand paper towels (all that's left) and bathroom cleaner.

Neither of us have contracted the coronavirus yet, but if we do, we have a plan to split the house into "his" and "her" zones. But outside, in the garden, we will still be able to stand together, watch as the cherry blossoms start to unfurl. Hope, spring, love — all the cheesy metaphors — float towards me this morning in March. Thank goodness we still enjoy each other's company after all these years. Thank goodness he is the person I would want to spend the apocalypse with.

Jeannine Hall Gailey served as the second Poet Laureate of Redmond, Washington. She is the author of five books of poetry, including her most recent, "Field Guide to the End of the World," winner of the Moon City Press Book Prize and the SFPA’s Elgin Award. Her work has appeared in Poetry Magazine and American Poetry Review. She currently lives near Kirkland, Washington. She has a B.S. in Biology and an MA and MFA in Creative Writing. You can follow her on Twitter and Instagram @webbish6.