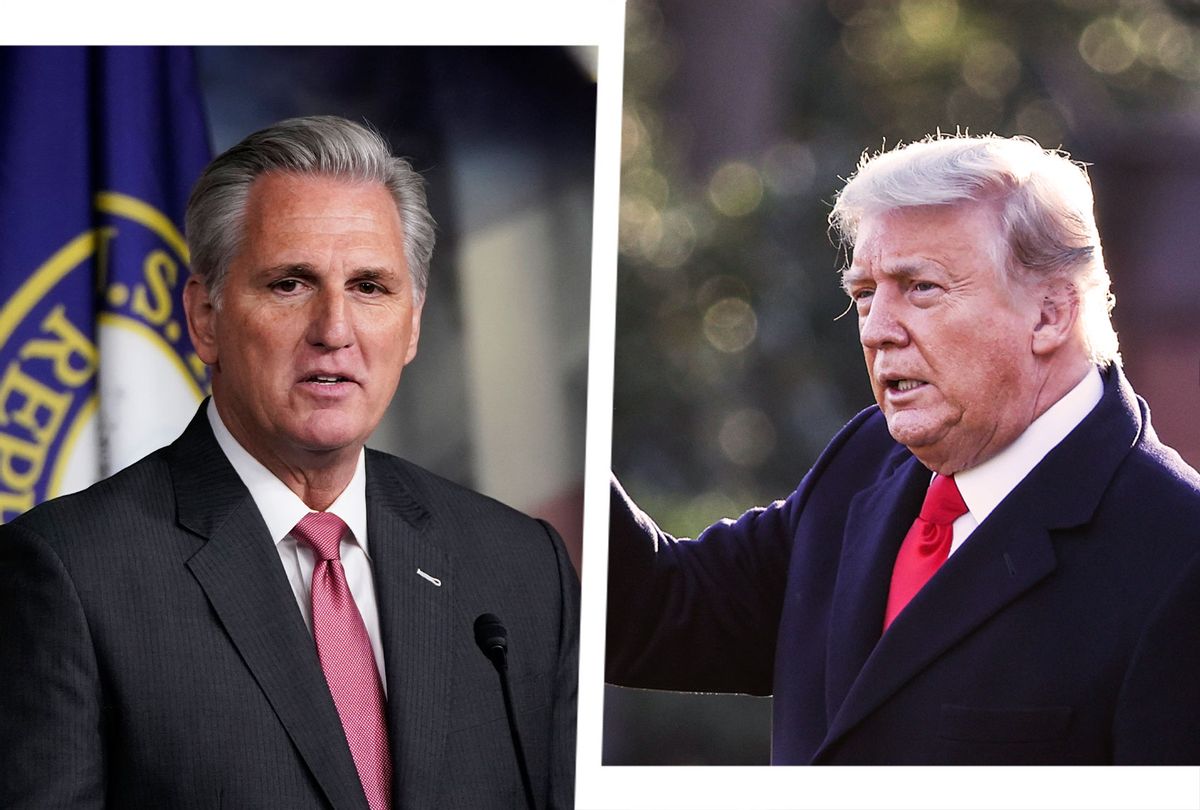 President Donald Trump left to his Mar-a-Lago resort for the Christmas weekend on Wednesday without signing the $900 billion COVID relief package or the $1.4 billion omnibus spending bill recently passed by Congress, setting up the possibility that crucial aid for the unemployed will expire and the government will shut down during the holidays.

House Majority Leader Steny Hoyer, D-Md., attempted to pass a standalone bill that would provide $2,000 direct payments to most Americans by unanimous consent, meaning the speaker and the leaders of both the minority and majority must agree, on Thursday but House Minority Leader Kevin McCarthy, R-Calif., objected to the measure. Democrats are expected to put the bill up for a full vote on Monday. Republicans will likely reject the relief checks, endorsed by Trump at the 11th hour, again. In the meantime, unemployment aid for 14 million people expires on Friday.

Congress passed the relief and spending bills on Monday after months of stalled negotiations — which Trump chose not to participate in. A group of bipartisan senators got Senate Majority Leader Mitch McConnell, R-Ky., to eventually cave on his demand for a corporate liability shield to protect companies from the responsibility of keeping their employees and customers safe in a pandemic. Democrats dropped their demands for increased federal funding to aid states and municipalities hit by the economic lockdowns. After Sens. Bernie Sanders, I-Vt., and Josh Hawley, R-Mo., drew bipartisan praise for calling to raise the $600 stimulus payments in the coronavirus bill to $1,200, Trump demanded the payments be increased to $2,000. While Sanders and Hawley had already backed off their demand in the interest of passing a relief bill before programs like unemployment insurance expire this month, Trump suddenly declared that he would not sign the much-needed aid package, which also includes relief for laid-off workers, small businesses, and the poor. He did not mention in a video he released late Tuesday that his own administration pushed the $600 payments.

The move blindsided Trump's own staff and lawmakers on Capitol Hill, who are now scrambling to figure out how to proceed. Trump, meanwhile, left for his golf resort days before unemployment benefits for 14 million people expire on Sunday, government funding expires on Monday, and a moratorium protecting 30 million people from eviction expires at the end of the month.

Congressional Democrats, who have pushed for higher stimulus payments since the Cares Act in their attempt to pass a much larger $3.4 trillion relief bill in May and $2.2 trillion package in October, welcomed the call for $2,000 checks after  McConnell objected to larger payments for months. But Trump's own party now stands in the way of his last-minute demand.

McCarthy has demanded to renegotiate the foreign aid in the spending bill that Republicans approved after Trump's demand but Democrats have little interest in revisiting a bill they already passed.

Since the original aid package already passed, Trump could simply veto the bill and Congress could seek to override his veto. "Yet it's likely that the relief effort could fall apart entirely at that point, given that congressional Republicans have already indicated that they are reluctant to go against Trump, who remains widely popular with GOP voters," The Washington Post reported.

"Amid all the craziness, it is worth pausing and recognizing the exercise in absurdity this is to try and pacify a single individual who is mad," tweeted CNN Capitol Hill reporter Phil Mattingly.

"I regret to inform you that no one has a damn clue what the president is up to," added Politico congressional reporter Jake Sherman. "Not Republicans. Not much of his White House. no one… There's a dark sense that's setting in among lawmakers, aides and even some of those Trump World 'insiders' that this entire tantrum is because Republicans are abandoning him on the Electoral College vote and acknowledging that his presidency is over."

"Nobody knows exactly what Trump is going to do and they're all trying to figure it out," a source in contact with the White House told the Post, predicting that the odds of a veto were "a little less than 50-50."

Depending on when Congress sends the package to the White House, Trump could also choose to pocket veto the legislation, meaning the bill would die once the next session of Congress begins on January 3.

A top Republican congressional aide told Politico the episode was a "complete clusterf*ck."

Rep. Don Bacon, R-Neb., said Trump threw House Republicans under the bus during a call with his GOP colleagues, according to The New York Times.

"I don't know if we recover from this," Representative Virginia Foxx, R-N.C., said on the call. "We will have a hell of a time getting this out of people's head."

The move could also impact the Republicans' hopes of holding their Senate majority, putting Sens. David Perdue, R-Ga., and Kelly Loeffler, R-Ga., in a tough spot. Loeffler said on Wednesday that she would "certainly look at supporting it if it repurposes wasteful spending."

"Trump has put Loeffler and Perdue in an impossible situation repeatedly throughout the entirety of the runoff. And this is just the latest chapter of the book of humiliation he has made them characters in," a Georgia Republican strategist told Politico. "What do they do? Do they defy the president and stand by what they had been saying or do they once again look like weak puppets with no backbone?"

Democrats Jon Ossoff, who is facing Perdue, and Rev. Dr. Raphael Warnock, who is challenging Loeffler, have already made higher direct payments a key part of their platform.

"As I've said from the start, the Senate should have acted on this months ago, and support for Georgians should have been far greater," Warnock said in a statement on Wednesday. "Donald Trump is right, Congress should swiftly increase direct payments to $2,000. Once and for all, Senator Loeffler should do what's best for Georgia instead of focusing on what she can do for herself."

Sherman reported on Thursday that Trump allies say that the president thinks his demand is "playing well with Americans" but Republicans increasingly believe they may have a better shot at passing a bill under President-elect Joe Biden. "Biden's a Democrat, but at least you know his administration's word is likely to be good," he said, adding that this Congress began during a government shutdown and "it could end shut down."