South Indian filter coffee is like no coffee you've had before 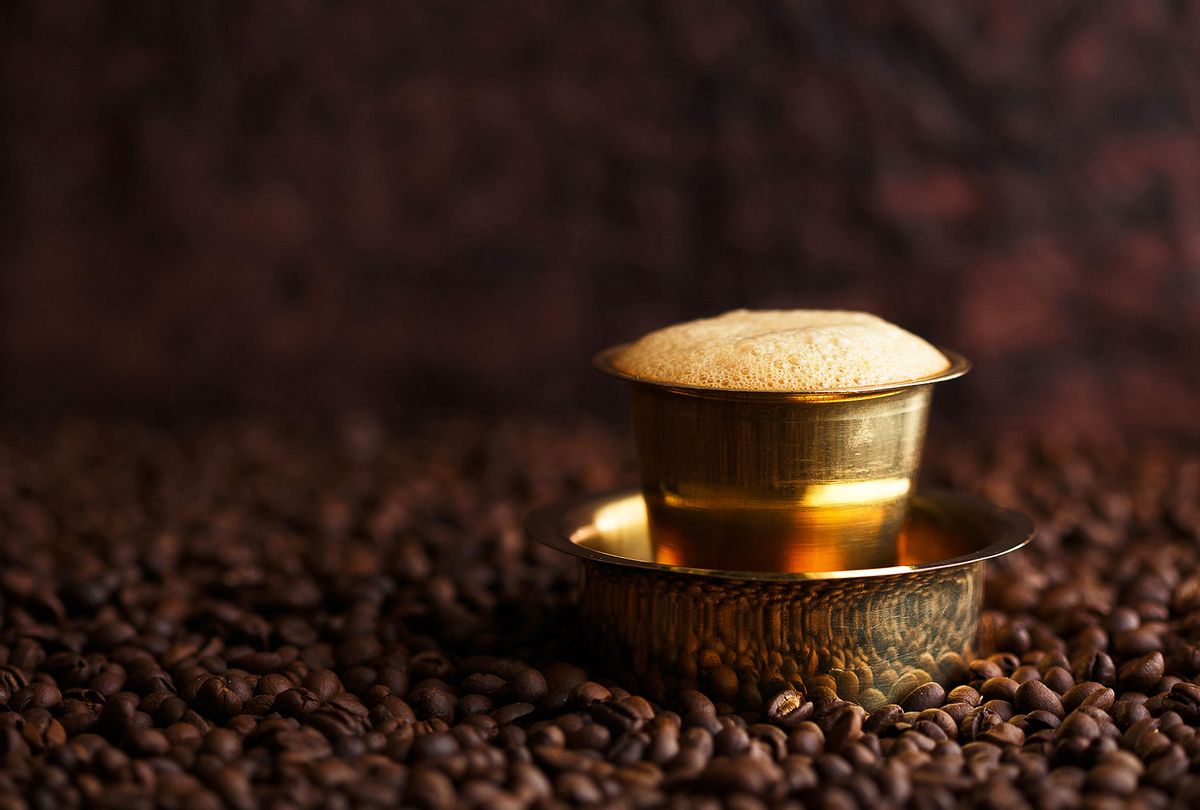 In April, my stainless steel coffee filter ran dry. Which is to say, I ran out of my favorite coffee — in the midst of a lockdown, no access to my Indian grocery store, and broken supply chains (both retail and by way of visiting aunties loaded with gifts). Anyone whose day begins with the certainty of that one precisely made cup would understand when I say: I was sad.

In the end I substituted, managed, survived. (OK, I may have begged a friend across town to mail me the dregs of her stash.) There were certainly far bigger worries to wade through, but its absence was felt. In a shaky world, it was the reassurance of that morning routine that I craved.

Filter coffee, or filter kaapi, is an integral part of South Indian food culture — and, for me, one steeped in nostalgia. When I was a child, unbeknownst to my mother, my grandmother gave me my first diluted half-mug, which carried with it the same sneaky thrill as that first furtive sip of beer a few years later.

As a teenager, the smell of freshly filtered coffee was my cue to get out of bed. As I shuffled down the stairs, my mother would be halfway through making coffee in her gnarled saucepan. Milk boiled first, to which a thick decoction (the coffee extract in the filter) was added — but never boiled — followed by sugar. The liquid was then deftly and repeatedly juggled between saucepan and mug to give it extra foam (norai)—this bit of food theater is entrenched in kaapi tradition (at many coffee houses you can see it poured from a meter high).

Our days began with the first sip and the crackling of a newspaper, my dad reaching for a pen to begin the crossword. Coffee consumed, we'd quickly fall into our practiced rhythms. There was no lingering or going for another mugful. This was a one-and-done kind of affair.

Because, when made right, one filter kaapi is all you need.

Though deeply ingrained in morning routines today, coffee isn't native to India, let alone South India. Regardless of whom you speak to, its arrival is shrouded in myth. Did that one Sufi pilgrim really smuggle in seven beans from Yemen in the 16th century? Did the French introduce it? What is clear is that it proliferated under British rule, as Sandeep Srinivasa carefully reconstructs in his timeline of coffee in India. By the mid 1800s, coffee plants began to thrive in South India's hilly regions, which proved to possess the perfect growing conditions for the crop.

Coffee drinking in South India had a shaky start. Seen as a predominantly upper-class Brahmanical drink, coffee played a direct role in the early-mid 1900s, as Srinivasa writes, in the Tamil caste's struggle for equal access to the coffee houses of the time. By the time the struggle reached its zenith in the early 1940s, the Coffee Board of India (formed to promote coffee production) was born, and South India was producing enough arabica and robusta beans not just for export, but also to be consumed domestically.

It isn't just the beans that make South Indian filter coffee so unique, though — it's a combination of how those beans are roasted and ground, brewed, and eventually served. A lot of these practiced rituals, along with the impenetrable sentiment for them, are passed down within families.

One of my own abiding memories from when we lived in Mumbai was accompanying my mother to a neighborhood called Matunga, a South Indian stronghold, to buy our monthly supply of coffee. There, I'd stand by as she oversaw the grind, enjoying the opportunity to practice her Tamil in what was often a lopsided conversation. On the drive home, the car's recirculated air would be flush with the aroma escaping from the loosely bound packs of coffee. That unmistakable smell was largely thanks to the particular addition of chicory to arabica beans — in my mother's case, in a golden ratio of 1:5.

Indeed, the subject of chicory — a caffeine-free coffee substitute used for its resemblance in color and aroma — cleaves South Indian coffee lovers down the middle. Purists hate when it appears in their coffee blend; others, like me, love its special touch of bitterness and strong aroma. (On my first visit to New Orleans, I gushed over the coffee at Café Du Monde, which is a mix of chicory and coffee — a rare sighting in these parts.)

According to Srinivasa, the addition of (and substitution with) chicory in filter coffee, as we know it today, took off during World War II, when coffee trade routes were disrupted and the industry suffered a setback. However, in this fascinating account tracing the roots of filter coffee, writer Vikram Doctor finds an antecedent as far back as 1876, in a Scottish drink called Camp Coffee. When mixed with hot milk, Doctor notes that the sweetened coffee-chicory essence tastes remarkably like filter coffee.

The other distinguishing feature of filter kaapi is the filter apparatus itself. A simple but effective device, it is a stainless steel or brass percolator divided into two halves, with a plunger, and an airtight lid. The bottom of the upper half is pierced with the tiniest holes, through which the coffee drips into the container below. While similarly constructed percolators find mention in cookbooks like in Culinary Jottings for Madras, which dates as far back as 1878, as Doctor mentions here, the one in use today might well be a homegrown, practical, metal version of the foreign percolators introduced to India.

I think back to my own great-grandmother, who enjoyed working with her trusty metalsmith to design rustic versions of all sorts of non-native cookware — doughnut makers and dessert molds and egg poachers — and the evolution of filters from do-it-yourself to commercially produced seems entirely plausible.

Across the oceans today, in my Brooklyn home, filter coffee gives me the familiar foundation I need to start each day. Each morning, I get out my single-serving percolator (most filters for home use are sized for one or two) and measure out two heaping teaspoons of coffee. I take care to press down with the plunger — not firmly enough and you risk the hot water running through too quickly, too hard and it goes all clogged-drain on you — before I pour over the boiling water, and wait it out. It's this slow-brewing process that makes the coffee so special. As Vikram Doctor tells me: "The initial heat gets some of the bitter aromas that you get from espresso, but not all of it, and then the longer brewing gets the mellow flavours."

To the patient go the spoils.

A couple months into running out of coffee this past spring, and in an attempt to find a more sustainable supply, I came across a pandemic mini-miracle: Ministry of Kaapi, a supplier of "damn fine Indian coffee" right here in New York. Founder Danée Shows was introduced to South Indian coffee when her husband Shiv's sister sent them a batch from India. She loved it so much, she searched high and low for replenishment here in the U.S. — and failed. Taking matters into their own hands, they set up shop, selling everything from coffee blends to paraphernalia, including the traditional tumbler and davara set that's part of the ceremony of serving filter coffee (and is widely used today, but has its own troubled origins).

Shows enjoys the challenge of introducing kaapi to a new audience that often mistake it for American drip coffee ("it is a drip but a very slow one"). And for those intimidated by the filter or the brew time, they offer bottled decoction (liquid coffee extract) that can be stored in the fridge for up to a month. "Stocking your fridge with decoction means freeing up time, while still savoring a super fresh, small-batch brew," she says.

At-the-ready decoction is a thrilling convenience, even for someone like me who carries her filter everywhere she goes. In India, friends tell me about iD coffee, decoction sold in sachets that have been a game-changer for those unfamiliar with the filtration process — North Indians particularly, but not exclusively, are more used to tea—but who crave the filter coffee made at friends' homes.

My own mother is very used to requests for filter coffee from her (pre-pandemic) guests, and she's always thrilled to oblige. Her only caveat: "Do you have 30 minutes? Because that's how long it will take." My father at this point would shift uneasily in his seat, having already prepared his goodbyes. He'd no doubt find a bottle of decoction or a stock of sachets very handy in these situations.

For the daily, and very necessary, morning cup, however, I will always enjoy the meditative ritual of slow-brewing that single, singularly delicious cup. On days when I know I'll be short on time or patience, I let it drip the previous night, and it tastes just as delicious. But I almost never skip the frothing trick — the stretch-pouring between saucepan and mug — a bit of early-morning daredevilry to arrive at a coffee that hits the spot every time: smooth, strong, aromatic, with a lofty, wobbly crown of foam.