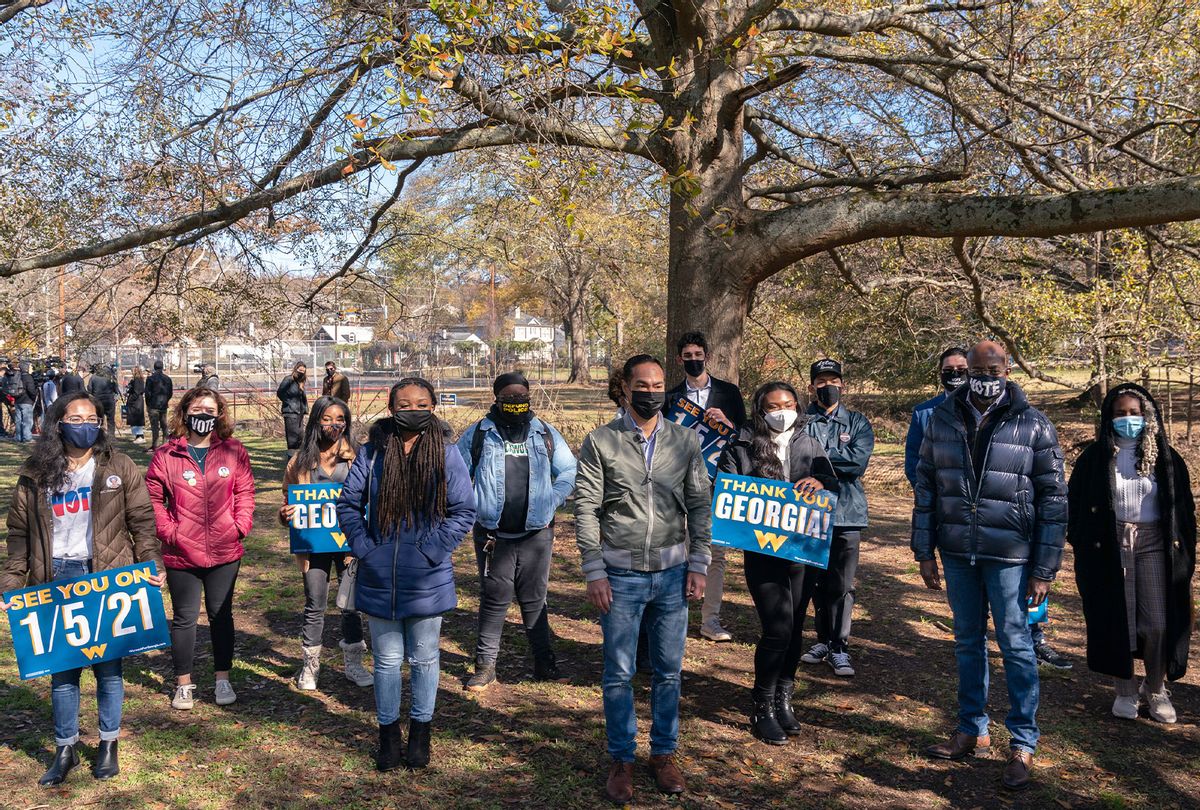 Joe Biden's victory in Arizona is one of the big stories of the 2020 election. Biden became the first Democratic presidential candidate to carry the state in almost a quarter of a century, and only the second in more than 70 years. At the same time, Mark Kelly was elected to the U.S. Senate, meaning that the home of Barry Goldwater will soon be represented by two Democratic senators.

These victories are the fruit of years of organizing by Latino activists and their allies.

A similar political transformation is shaping up in Georgia, where long-term organizing by Stacey Abrams and a broad network of activists helped deliver the Deep South state to the Democratic presidential ticket for the first time in nearly three decades. Two extremely important U.S. Senate races in Georgia are now headed for runoff elections on Jan. 5.

Together, these states highlight both the increasingly multiracial and multicultural nature of the United States and the importance of continued progressive and Democratic Party organizing in these communities. And although it might seem less obvious in Georgia than in Arizona, organizing Latino voters in the Peach State will be a key to victory in the runoffs there — and needs to be underway right now.

In Arizona this year, Latino voters turned out in record numbers and a supermajority of them voted for Joe Biden. In a state where the Democratic ticket's margin of victory was just over 10,000 votes, exit polls and surveys on the eve of the election suggest that Latinos voted for Biden by a margin of somewhere between 230,000 and 280,000 votes. Rising turnout by Native Americans also helped put Biden over the top.

Latino leaders in Arizona have had strong incentives to organize. The anti-immigrant S.B. 1070 became law in 2010. That same year, the legislature banned ethnic studies in public schools. For years, Maricopa County Sheriff Joe Arpaio terrorized Latino families while bragging about his brutality. In 2016, voters knocked Arpaio out of office and raised the state's minimum wage. This year's election results reflected the continued strength of organizing by what one reporter called a "powerful, intersectional grassroots network of Latino, immigrant, labor and LGBTQ community organizers."

In Georgia, Abrams and a broad network of community leaders and organizations never stopped organizing or registering voters after her narrow defeat in the 2018 governor's race. Not only did Biden take the state this year, but in suburban Cobb and Gwinnett counties, white Republican county commission leaders were replaced by Black Democrats. Since the Nov. 3 election, activists have continued to register new voters for the runoff.

Latino voters in Georgia make up a smaller percentage of the electorate — about 7 percent — but exit polls suggest that Georgia Latinos backed the Democratic ticket by a 25-point margin, making them an important part of Democrats' winning coalition. That's a key story in American politics today. Turnout from Latino voters — led by Latinas and young people — propelled Democrats to crucial wins in Arizona and Nevada and contributed to victories in places with growing Latino populations like Pennsylvania and Wisconsin, where strong turnout by African American voters is credited with leading Democrats to victory. In Pennsylvania, where turnout among African American voters was crucial to Biden's win, Latinos also gave the Democratic ticket an estimated 140,000 more votes than Trump.

The experience in Virginia, where our organization has played a role in the past nine years on outreach to Latino voters, is an important case in point. Much more comparable to Georgia's in size, the Latino vote in Virginia has played an important role in turning Virginia, once home to the capital of the Confederacy, blue over the past few election cycles. Latino voters provided the margin of victory in the 2013 governor's race, and, in 2017, Latino voter turnout grew disproportionately compared to the general population — by 17 percent. Latino voters also played a critical role as they made up significant portions of the electorate in competitive state legislative districts, helping to flip the state legislature to the Democrats. And that vote, when engaged, can play a significant role in Georgia as well.

National progressive campaigns and funders have too often overlooked the growing importance of the Latino vote. Trump's campaign and the Republican Party know that the fight is at the margins, and have invested early and often in culturally competent outreach in places like Florida.

People for the American Way and its Latinos Vote! project have worked to fill those gaps in recent years by supporting local organizers and investing in Spanish-language media. It's important to remember that one of the progressive movement's great organizing slogans, "Sí, se puede," or "Yes, we can," was born during a United Farm Workers' campaign in Arizona in 1972, when some people thought that it would be impossible to organize in that conservative state. They said, "No se puede en Arizona." But Dolores insisted, "Sí, se puede," back then. That became a chant and a call to action that still inspires people to action half a century later.

As we continue to build the grassroots and political power necessary to defeat right-wing political forces that have been radicalized by Trump, Democrats and their progressive allies must invest early and strategically in voter education and mobilization that addresses Latino community needs and mobilizes civic engagement — for the next six weeks in Georgia, and for the long run nationally. Sí, se puede en Georgia.

Ben Jealous is president of People for the American Way. A longtime civil rights leader and social-impact investor, he was president and CEO of the NAACP from 2008 to 2013.

Dolores Huerta is a board member of People for the American Way. A longtime labor leader and civil rights leader, she co-founded, with César Chavez, the National Farm Workers Association, which later became the United Farm Workers. She has received the Eleanor Roosevelt Award for Human Rights and the Presidential Medal of Freedom, and was the first Latina inducted into the National Women's Hall of Fame.