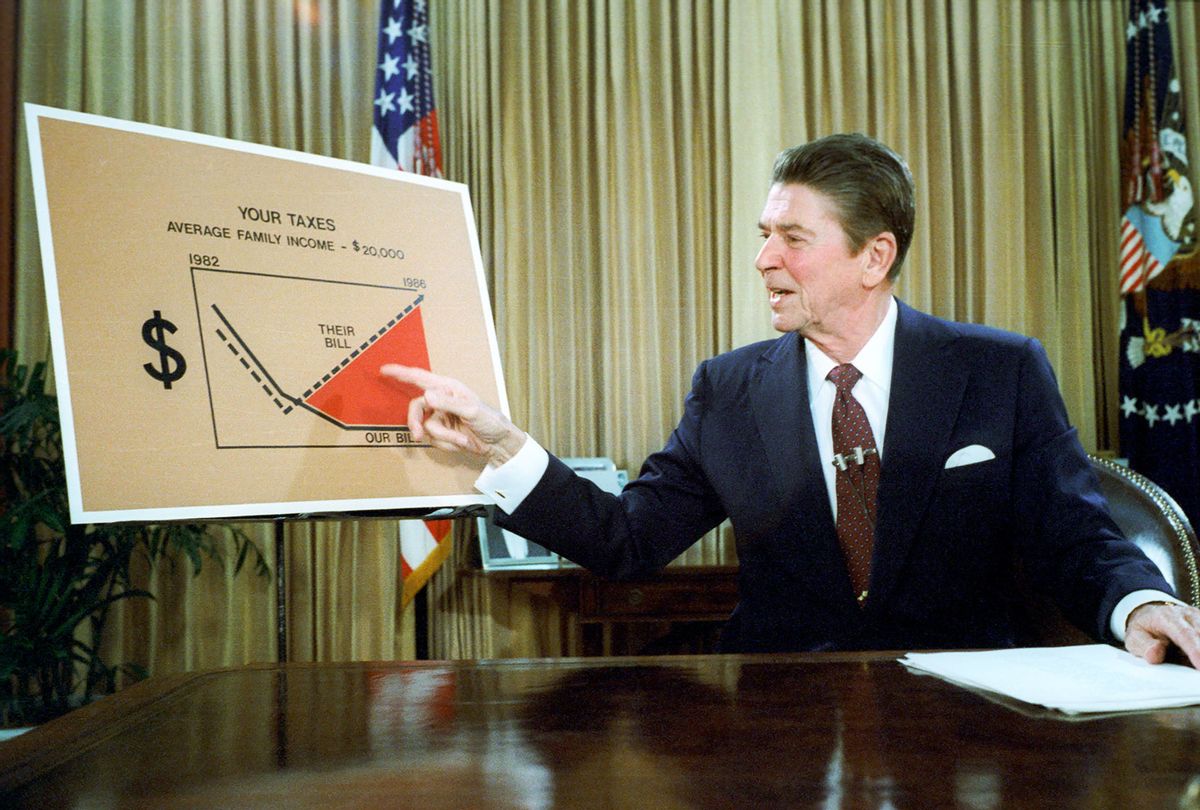 A study of 50 years of tax cuts found that "trickle-down" economics — a concept pushed by Republican lawmakers to justify slashing taxes on the wealthy — have only benefited the rich and worsened economic inequality while failing to decrease unemployment or grow the economy.

Republicans have touted the idea popularized by Ronald Reagan that tax cuts for the wealthy and corporations would inevitably "trickle down" to workers, despite ample evidence showing that wealth has accumulated at the top while worker wages have barely budged for decades. A new working paper from researchers at the London School of Economics and Kings College's London, which looked at the effect of five decades of tax cuts for the wealthy in 18 developed countries, shows that the concept has always been flawed.

While the tax cuts for the top 1% have obviously benefited the wealthiest taxpayers, they have failed to "trickle down."

"The results also show that economic performance, as measured by real GDP per capita and the unemployment rate, is not significantly affected by major tax cuts for the rich," the authors wrote. "The estimated effects for these variables are statistically indistinguishable from zero."

The findings, they said, add to the growing body of research showing that "cutting taxes on the rich increases top income shares, but has little effect on economic performance."

The study looked at the effects of tax cuts in the United States, as well as countries like Australia, Canada, Germany, Denmark, France, Italy, Japan, Norway, and the United Kingdom, among others. Unlike past studies, the authors looked at various taxes like the estate tax and capital gains taxes whereas most past research has focused on a single type of tax.

"Our research shows that the economic case for keeping taxes on the rich low is weak," Hope, a visiting fellow at the London School of Economics' International Inequalities Institute, said in a statement. "Major tax cuts for the rich since the 1980s have increased income inequality, with all the problems that brings, without any offsetting gains in economic performance."

Limberg, a public policy expert at King's College London, said he hopes the findings influence coronavirus relief policy since they imply that lawmakers "should not be unduly concerned about the economic consequences of higher taxes on the rich."

Paul Caron, a tax law expert at Pepperdine University, sought to add some context to the findings, noting that tax reductions for the rich "tend to happen at the same time as economic booms" and in some cases have included reforms that made the tax system more progressive. "It's also worth pointing out that tax increases on the rich also don't significantly affect economic growth and unemployment," he added.

But Hope and Limberg argued that the findings show that political rhetoric used to advance policies like President Donald Trump's 2017 tax cuts for the wealthy is highly overblown and largely driven by their beneficiaries.

"This is particularly pertinent in this case," the authors wrote, given the power of the rich and business interests to "shape public policies" in their favor.

Other data shows that Trump's tax cuts have overwhelmingly benefited the richest taxpayers and corporations. The tax cuts did not pay for themselves, as he claimed they would, failed to stimulate economic growth, and did not spur significant business investment, though they did trigger massive stock buybacks.

The authors also looked beyond recent events at tax cuts pushed by the Reagan administration as well as similar cuts in the UK.

"Falling taxes on the rich have coincided with a period of rising inequality," the authors wrote. "This trend has been most severe in the Anglo-Saxon countries. The US really stands out, with over one-fifth of pre-tax national income now going to the richest 1% of individuals."

While the analysis of five decades of tax cuts found a significant increase to the income share of the richest 1%, "gross domestic product per capita and unemployment rates are nearly identical after five years in countries that cut taxes on the rich and in those that did not."

The authors made the case for an increased tax on the wealthy, who have seen their wealth hit record highs amid the pandemic while millions of Americans fell into poverty. US billionaires have seen their collective wealth grow by $1 trillion since mid-March, according to research from Americans for Tax Fairness. The pandemic has only exacerbated decades of growing inequality. Data from the Census Bureau showed last year that income inequality was at its worst in at least 50 years.

The British researchers wrote in a piece at The Conversation that their data "suggests there is a strong economic case for raising taxes on the rich to help repair public finances following the pandemic."

President-elect Joe Biden has vowed to raise taxes on corporations and those earning over $400,000 per year. Leaders in the United Kingdom and Germany have also called for higher taxes on the wealthy to help fund the pandemic recovery. Argentina recently passed a one-off "millionaire tax" to pay for the country's pandemic response. The tax, which will affect fewer than 1% of taxpayers, is expected to raise up to $3.78 billion.

Dozens of American millionaires signed a letter in July calling for a tax increase on the richest Americans to pay for the coronavirus recovery.

"We can ensure we adequately fund our health systems, schools, and security through a permanent tax increase on the wealthiest people on the planet, people like us," said the letter, which was signed by Disney heiress Abigail Disney and Ben & Jerry's co-founder Jerry Greenfield.

But Congress' latest coronavirus deal includes a wide variety of tax breaks that will overwhelmingly favor the rich while slashing relief to the poor and unemployed. Democratic strategist Max Burns argued in a Business Insider op-ed that the 50% cuts to the enhanced federal unemployment benefits coupled with a payroll tax cut were "just another tax cut for the wealthy in disguise."