Many security agencies have “incurred enormous damage” under Trump, he said. “Many have been hollowed out” 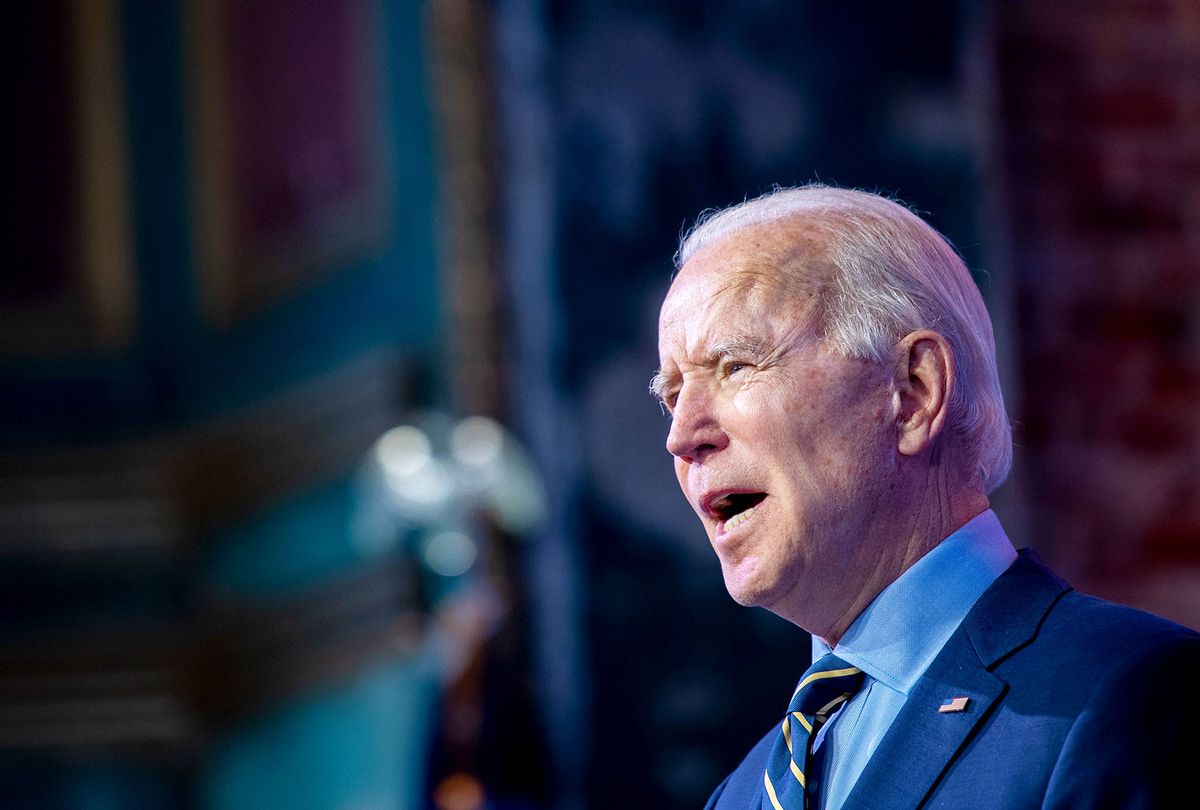 President-elect Joe Biden delivers remarks at the Queen Theater on December 28, 2020 in Wilmington, Delaware. Biden will be inaugurated as the 46th president in a scaled-down ceremony in Washington D.C. due to the coronavirus (COVID-19) pandemic on January 20, 2021. (Mark Makela/Getty Images)
--

President-elect Joe Biden said on Monday that his transition team has "encountered obstruction" from the Trump administration, warning that the lack of cooperation by national security agencies could result in "confusion" that "adversaries may try to exploit."

"Right now, we just aren't getting all the information that we need from the outgoing administration in key national security areas," Biden said Monday after a transition team briefing. "It's nothing short, in my view, of irresponsibility."

Biden said that his advisers have "encountered roadblocks" from political appointees at the Pentagon and the White House Office of Management and Budget despite his team receiving "exemplary cooperation from the career staff" at some agencies.

"Right now, as our nation is in a period of transition, we need to make sure that nothing is lost in the handoff between administrations," Biden said. "My team needs a clear picture of our force posture around the world and our operations to deter our enemies. We need full visibility into the budget planning underway at the Defense Department and other agencies in order to avoid any window of confusion or catch-up that our adversaries may try to exploit."

"Our DOD political and career officials have been working with the utmost professionalism to support transition activities in a compressed time schedule and they will continue to do so in a transparent and collegial manner that upholds the finest traditions of the Department," he said in a statement. "The American people expect nothing less and that is what I remain committed to."

Miller said that the Pentagon will "continue to schedule interviews" with senior leaders for early January and "coordinate any urgent Operation Warp Speed or COVID-related requests" over the holidays.

Biden's transition team faced an unprecedented delay from General Services Administration head Emily Murphy, a Trump appointee who blocked the transition team's work for weeks after Biden was projected to win the election. Murphy finally signed the necessary paperwork ahead of Thanksgiving but Biden's transition team said earlier this month that Miller had ordered officials not to cooperate.

Miller denied that the Defense Department "canceled or declined any interview" and cited a "mutually-agreed upon holiday" break for a delay in meetings.

"Let me be clear: there was no mutually agreed-upon holiday break," Yohannes Abraham, Biden's transition director, told reporters in response to Miller's denial. "In fact, we think it's important that briefings and other engagements continue during this period as there's no time to spare, and that's particularly true in the aftermath of ascertainment delay."

A Biden transition official told Politico that the Defense Department has continued to "deny and delay" meetings and that "no progress" had been made since the public clash.

"As the President-elect alluded to, no Department is more pivotal to our national security than the Department of Defense, and an unwillingness to work together could have consequences well beyond January 20th," the official said.

Miller was picked by Trump to head up the Pentagon after the abrupt ouster of Defense Secretary Mark Esper. Trump purged many of the Defense Department's leaders following the election and named Kash Patel, a former top aide to Rep. Devin Nunes, R-Calif., who led efforts to discredit the Trump-Russia investigation, as Miller's chief of staff.

"The Defense Department won't even brief us on many things," he said.

Biden on Monday warned that many national security agencies have "incurred enormous damage" under Trump.

"Many of them have been hollowed out — in personnel, capacity and in morale," he said.

Biden said that he had already spoken to a long list of foreign leaders and aims to repair the relationships torpedoed by Trump's foreign policy.

"Right now, there's an enormous vacuum," Biden said. "We're going to have to regain the trust and confidence of a world that has begun to find ways to work around us or work without us."